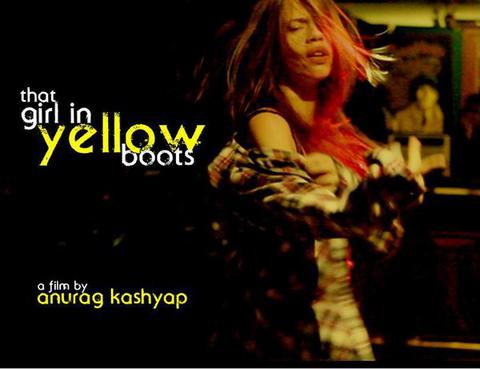 Minnesota Film Arts’ In Search of Asia festival opened on Wednesday November 3rd with “That Girl in Yellow Boots,” a drama by Anurag Kashyap.  At that hour, this was the film’s one showing.

Twenty-year old Ruth [Kalki Koechlin] is a mixed Indian-British girl amid a minor odyssey toward…whom else…her long since light-footed father, for which she finds perverse closure (naw, it ain’t that!) in the end. Ms. Keochlin also co-wrote this story.  On a student VISA, she makes her way as a masseuse, and actually does a few legit jobs sans “happy ending” – or handshake as she calls it.

It asks questions of love, which are as interesting as they are awkward, and taboo ones about sexual boundaries.

When she isn’t working as a soft-core hooker, she spars with and then spurns an Indian hustler boyfriend, who seems to only want same as her clients, but authentic intimacy.  Essentially she’s an illegal, white British sex worker, whose odyssey – outside from an exploitive and world-widening sojourn in Mumbai – is to pursue the Indian father, whose own figure and face is a mystery to her – and who abandoned family after older sister’s mysterious death.  That want for a dad wreaks a cornerstone of Ruth’s morose, exotic reality and lifestyle.

From Indian cinema we expect three-hour plus fantastical musicals where the color palette is often as boisterous as the music.  “That Girl in Yellow Boots” is a radical detour from that set of expectations.  While Ruth’s story is about love, it’s more about how she protects herself, cordoning herself from intimacy and keeps her control within her own clutches.

Late in her story, after her boyfriend writhes through his self-installed detox, he asks why she does massage; she blurts confiding “because I need somebody..!”  She does splendid and remarkable if also typical work of avoiding opportunities for that intimacy (or is it a reckoning) for which she’s hungry.

Her dad, Arjun Patel (which may or may not even be his name), for whose attention she yearns, married Ruth’s mother for perverse reasons different from love: those we know are awkward, those we learn of make our skin crawl, our jaws gape.  Her dad is the key to twisting the scimitar, which his abandonment had already shoved into her gut, into a hemorrhaging emotional gouge.

Ruth is in a toxic emotional situation, but she’s no Dorothy visiting Oz; she’s an impressionable youth, but also deftly politic and cunning:  She’s solidifying her Hindi in order that no one exploit her.  She also knows how and when to offer bribes so that she can work via her student VISA so she can work and avoid jail. Snarky people ward men off from women who have “daddy issues” because enormous messes lay in those women’s wakes. Chris Rock said that a father’s main job: “keep my daughter off the pole.”  Ruth’s mindfuck is at least as bad as that reality.

It’s difficult to name comparisons to this story.  For the scope of the taboos, which “That Girl in Yellow Boots” picks at hint at “Priest”, from 1994, the self-righteous polemic against Catholicism’s suite of shortcomings, for the rough, incendiary potency.  When it comes to director Kashyap’s twist in the final act, consider the ending to Adrian Lyne’s “Jacob’s Ladder,” from 1990, about “a traumatized Vietnam war veteran finds out that his post-war life isn’t what he believes it to be…” per imdb; that messed with your mind and messed you up!  That last jerk or twist of emotional perversion in the end here…is at least as profound as what we get from Jacob’s bodybag being zipped up.

Imdb and wikipedia provide some peculiarities and head-shaking confusions in regards to this drama: each describes Ruth’s story as a thriller.  I disagree: this is a drama that has brief segment of suspense, in the last act.  This falls well short of flirting with an Alfred Hitchcock sensibility.