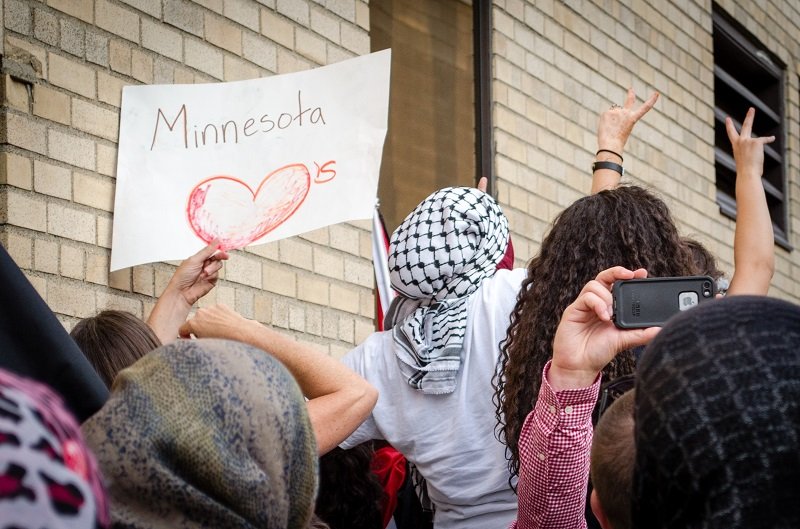 (Photo by Katie Nelson) Protestors applaud members of the Anti-War Committee as they are escorted into St. Paul Police cars and taken to jail. About a dozen people were arrested in Wednesday’s protest after refusing to leave Sen. Franken’s Campaign Headquarters in St. Paul.

Phones rang all afternoon at Sen. Al Franken’s campaign headquarters in St. Paul on July 30 as anti-war protestors listed the names of victims killed during recent violence between Israeli military and the militant group Hamas.

“Franken see Gaza!” protesters chanted between reading another set of names. “We need to talk to the Senator. Are you able to get him on the phone with us?”

Outside, more than 250 protesters yell a similar slogan over a loudspeaker while others hold up signs and, at times, bang on the windows looking inside the Sen. Franken’s campaign office off of University Ave.

Wednesday’s protest resulted in about a dozen arrests and was coordinated by the Anti-War Committee of Minnesota, a volunteer organization that opposes “U.S. war and militarism” including U.S. support and financial assistance to Israeli military.

The protest was one of several recent demonstrations by the group aiming to bring attention to the escalating conflict in the Middle East between the Israeli military and the Palestinian militant Islamist group Hamas.

Israel and Hamas have been at odds since early July with actions escalating in the past several days. As of July 31, 1,418 Palestinians and 59 Israelis have died since Israel began a military initiative against Hamas on July 8, 2014, according to the New York Times. In addition, 3,754 targets in Gaza have been struck by Israel and 2,848 rockets launched at Israel from Gaza during that time period. Opponents of Israel’s recent aggression argue that too many Palestinian civilians are being killed in the exchanges.

Hunkering down in the Franken campaign office, protesters demanded to speak with the Minnesota lawmaker, who recently signed his name—one of 79—on a U.S. Senate resolution to support “the State of Israel as it defends itself against unprovoked rocket attacks from the Hamas terrorist organization.”

The resolution was passed with unanimous consent on July 17, 2014, the same day that Israel began a ground offensive in the Gaza Strip.

“Al Franken is openly supporting terrorism … that is on the verge of genocide … Do you even know what you’re supporting?” a protester asked a group of Franken interns who were phone banking at the headquarters.

The protest became increasingly contentious over the next three hours with one protester purposely blocking a Franken staff member from exiting their office and another group of protestors surrounding a man waving an Israeli flag outside the building.

Among those protesting outside the campaign headquarters was former FBI agent and whistleblower Coleen Rowley.

Rowley, who is best known for testifying about the FBI’s failure to act on information regarding the September 11, 2001 terrorist attacks said Franken “always gave reason, at the time, that he was anti-war. He pretended and feigned that he was against war. But since he’s been elected— I’ve got a list of his votes—and literally there are 20 [pro-Israel] votes. He’s just one-sided,” she said.

Sen. Franken is running for re-election this upcoming November against republican Mike McFadden. Franken won his current position by a 312-vote margin in 2008.

As the protest gained strength, it became more and more unclear how many protesters were directly opposing Sen. Franken’s policies, who was involved with the Anti-War Committee of Minnesota or how many people were simply spectators at the event.

Hannan Ayoub, 27, attended Wednesday’s protest with other supporters; some of whom were waving Palestinian flags and matching face paint. Ayoub said she left her home in Palestine when she was two years old, but still has family members living in the Gaza Strip.

The unfolding humanitarian crisis for Palestinian people prompted her to attend the rally, she said.

“[Israel] is calling this self-defense but this isn’t self-dense. Palestinians have nowhere to run and nowhere to go … they have nowhere to hide,” she said. “This is a modern day Holocaust in Palestine.”

Inside, protestors said they would not leave the headquarters until they could speak with the senator.

Eventually, members of the Franken campaign allowed the protestors to speak with the senator for about 10 minutes via a conference call.

“I was a huge fan of yours. I have all your books,” said Tarik Rasouli to the senator toward the end of the call. “My favorite was the Lies and the Lying Liars Who Tell Them. I don’t know what happened after you got elected. I don’t know who is in your pockets. I don’t know how you could become one of those lying liars,” he said.

Franken campaign staff hung up the phone before the senator could respond.

Despite meeting the protestors demands, about a dozen or so anti-war activists refused to leave the Franken offices. Eventually, the St. Paul Police Department arrested a handful of protestors and led them to a paddy wagon waiting outside the building.

“I can promise there are a lot of other things I’d rather be doing right now,” one St. Paul Police Officer remarked before beginning the arrests.

Earlier in the day, Fetissoff released a statement from Franken about the pending protest, stating, “Freedom of speech is a first amendment right that Sen. Franken strongly values. We welcome the protestors today and appreciate that they are expressing their views to Sen. Franken and the campaign.”

Fetissoff later said the staff members didn’t know the protest would be so disruptive.

About a dozen protesters were released from jail Thursday afternoon, according to the Anti-War Campaign Twitter account.

Correction: A previous version of this story incorrectly stated when the U.S. Senate passed the Israeli support resolution. It was passed on July 17.