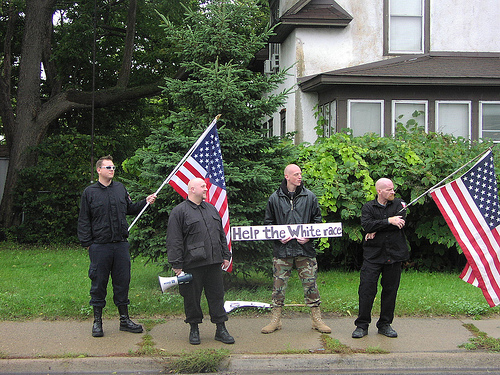 Hundreds of anti-racism protesters shouted down the four men who showed up to hold an advertised Nazi (National Socialist Movement) rally in Minneapolis Saturday morning, at the Midtown YWCA on Lake Street.

They were met by a large crowd of anti-racism protesters. The counter-protesters had plenty of chants and some speeches. The Nazis didn’t have much to say, other than a few shouted exchanges:

The Nazis, with their sign saying “Help the white race,” were protected by Minneapolis police. Eventually, the four were escorted by police past South High to their car, followed by shouting protesters.