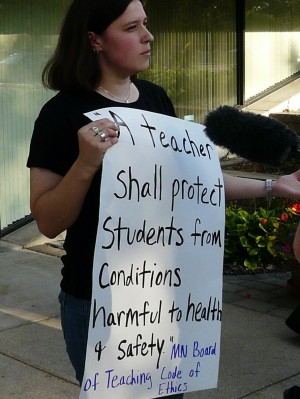 After late-August protests, Cleveland and Filson were put on leave from their jobs. Photo: Andy Birkey, MnInd

Anoka-Hennepin School District 11 teacher Diane Cleveland filed a lawsuit against the Minnesota Department of Human Rights (MDHR) in Ramsey County District Court Monday, alleging that earlier this summer it wrongly disclosed that she had been accused of harassing a student over his perceived sexual orientation.

Cleveland and another teacher, Walter Filson, who worked at the Secondary Technical Education Program (STEP), which gives 11th and 12th graders the opportunity to receive college credit, allegedly made jokes, comments and innuendos about former student Alex Merritt’s supposed sexual orientation. The teachers were put on unpaid leave, while the case, which received plenty of media attention and public outcry, concluded with a $25,000 settlement agreement in August 2009 between the district and Jodi Merritt, Alex’s mother.


The 28-page complaint (pdf) against the human rights department, which states that she was “portrayed in a negative fashion,” contends that MDHR violated some parts of the Minnesota Human Rights Act (363A.01 et. al.) and the Minnesota Government Data Practices Act, Chapter 13, when it printed her name online and provided the summary investigation, which names her, to the Star Tribune.

Cleveland’s attorney, Philip Villaume, said the case centers on her right to privacy. “The law is complicated, but the allegations are simple,” he said.

In the original complaint Cleveland wasn’t a respondent but a witness, so the department “did not have the right to use her name … It violated the confidentiality part of the settlement.”

The original charging documents don’t mention her by name and she was never interviewed by MDHR. That she’s a public employee doesn’t factor into it, he said.

Villaume declined to comment about why the other teacher isn’t a plaintiff in the case, whom he added he doesn’t represent. A press release from Villaume’s office states: “Plaintiff stresses that this action has absolutely nothing to do with the minor child’s complaint filed with the MDHR, only the release of private data by the MDHR.”

Cleveland wants a restraining order and an injunction “restraining the Defendant from publishing her name on their website or dissemination of any information relating to the Plaintiff effective until a trial on the merits of this case,” according to the complaint. She’s also seeking $50,000 in damages, including lost wages, anxiety, humiliation, pain, suffering, mental anguish attorneys’ fees and more.

“The Commissioner has a duty to eliminate discrimination through education,” he said, adding that she has the authority to choose the most effective means. “The Department publishes information on closed cases and settlement agreements on its web site, as it did in this case, to fulfill its legislative mandate to educate Minnesotans about their rights and responsibilities under the Act.”

Further, under the law, he said, information is public once a case is closed. MDHR is required to release certain documents upon request.

“The charge included the names of those involved, including teacher Diane Cleveland; refusing to release the charge, or withholding any part of it, would potentially violate the Act,” he said.

Local data practices expert Donald Gemberling said the human rights commissioner has some latitude in releasing information for educational purposes, “showing people how to not get into trouble with the Human Rights Act,” he said.

But he’s unsure if it’s ever been tested.

“The fact that someone is not a respondent is an interesting argument,” he said, adding that it seems well within the department’s authority to do what it did. Sometimes settlement agreements include a provision for confidentiality, but it has no legal effect. “Settlements are public if they involve government entities,” he said.

Many aspects of the data practices law are black and white, but how information about public employees gets handled is murkier. It’s unclear how information flowed from the school district to the state department. Normally, when a department has some leeway in instances like this, “the judge favors the department,” Gemberling said.