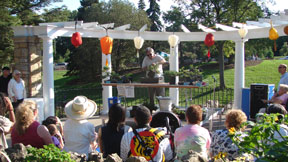 MIchael Porcaro entertained a large following at the festival with his bonsai art.

The Japan American Society and Como Park celebrated their annual Lantern Lighting Festival on Sunday. The event drew thousands of people throughout the afternoon, where they enjoyed the nearby Como Ordway Memorial Japanese Garden setting, with its path winding around a waterfall, streams and the nearby tea house.

The crowds had perfect weather to enjoy food, culture and fun well into the evening when they participated in the annual Obon tradition to honor departed ancestors by placing the floating paper lanterns with lit candles onto a pond. The lanterns are meant to guide spirits back to their ancestral homes.

Obon is held on the seventh lunar month of the year (mid-July) and during the first weeks of August. The legend is that Mogallana (a Buddha disciple) offered food to monks to save the soul of his departed mother and send her to paradise. His dance of joy became the bon dance, and evolved into an annual celebration to include the lanterns.

The festival exemplifies how both the American and Japanese cultures have influenced each other and flourished. Among the venders, martial arts and community groups, there were several non-Asian members, whether as spouses of Japanese or those who exhibit a fascination with the culture.

There were dozens of cultural booths, venders and exhibitions of martial arts, Origami, Ikebana, kite-flying, and of course an array of Bonsai specimens from the Minnesota Bonsai Society. There were several booths of beautiful Japanese pottery,

Master Gardener Michael Porcaro had quite a crowd on his hands as he offered his free Bonsai growing classes, each with a free drawing to give the plant away a the end.

Porcaro taught the basics of bonsai. There are variations of needs, depending on whether growing an ivy, hornbloom, procumbens, boxwood, or juniper tree. But, essentially, all bonsai trees require a very porous soil, and because of that, need to be watered daily. Clipping the roots keep the otherwise normal trees from growing larger. The signature twists and bends to the branches begin with wire that is removed as the tree begins to hold its shape.

The Main Stage entertainment was emceed by WCCO-TV Reporter Maya Nishikawa, who introduced Ben van Lierop, who appeared in the first major event as the new executive director of Japan American Society of Minnesota.

Koto performer Fern Davidson on Koto and Leo Hanson, a Shakuhachi flutist, performed throughout the day in the garden.

More than two dozen area organizations that have something to do with Japanese-related arts or culture took part in the event, including Haiku Minnesota, Bonsai Society, Saori Free Style Weaving Studio, and Ikebana International. There were martial arts performances from ten area schools.

The food venders ranged from church groups to sushi restaurants, and offered an array of cold and hot Japanese cuisine.