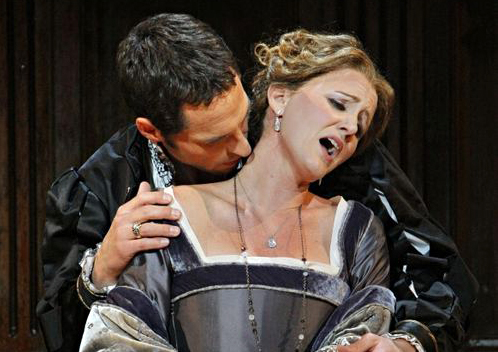 When did Anne Boleyn become a sympathetic character? On November 8 at the dress rehearsal for the Minnesota Opera’s production of Donizetti’s Anna Bolena—opening Saturday, November 10 at the Ordway Center for the Performing Arts—I was introduced to a whole new Anne Boleyn. This Anne Boleyn walks around with her young daughter Elizabeth. This Anne Boleyn pines for her first husband Richard Percy. This Anne Boleyn forgives her replacement Jane Seymour for stealing the king. I’m not sure if I like this sympathetic Anne Boleyn, but I sure enjoyed the new spin on a familiar tale.

The story opens with a grieving Anne Boleyn, apparently comforting Elizabeth. No, that’s not quite right. The story opens when the gorgeous tapestry rose fades from the sheer, silky curtain and we’re drawn into privacy of the queen’s bedroom. The first note from the orchestra are somber. Her tiara sparkles to the back row; she wears a gorgeous blue gown, set off by the stark grey and black costumes of the men’s chorus. Anne gently caresses the head of her daughter Elizabeth who presence conjures innocence and dark omens.

Costume designer Jessica Jahn allows Anne to shine throughout the show between the gorgeous velvety blue and her final gown of angelic (?), ghostly (?), virginal (?) white. Few other characters are given the luxury of color. Richard Percy wears a jealous green. Smeton wears a paler version of green. And Jane Seymour is allowed to shimmer slightly is a violet shade of grey that seems to sharpen to purple as her stature grows.

While the costume helps to make the woman, the set designer, Neil Patel, gives Henry a lift, both literally and figuratively.  As Anne Boleyn caught indisposed with Richard Percy sings (in Italian, translation courtesy of subtitles), “my fate is sealed when my accuser has the power to condemn,” Henry emerges above the rest of forming mob in an overpowering judge’s seat demonstrating that he is indeed accuser, judge and jury. The scene fades into an amazing stone crucifix backlit by a glowing blood red hue. It’s chilling.

Through a pre-show talk with conductor Michael Christie, I learned to listen for the interplay of instruments and voice in the show. Sometimes the singer sets the tone, sometimes the orchestra leads the action. I also learned, through the beauty of the live Tweeted event, that some of the singers were marking, or singing at half voice, to save their voice for opening night. Well in the words of another Tweeter, “Oh, to sound half as good as these guys do marking…” (Side note: I wish there were an undercurrent of Tweets at every performance I attended. Great opportunity for learning and sharing the experience!)

My background helps more with the story behind the song, but I enjoyed the music. I was struck by the difference in the opening of the first scene with the male singers taking the powerful lead in song and women’s chorus that mournfully began the action after intermission. Keri Alkema (Anne Boleyn) has a beautiful soprano voice: her voice at full force makes you sit up a little straighter. John Robert Lindsay was a very appealing Henry; both with the tenor voice but also being much easier on the eyes than a more realistic rendition. Tenor David Portillo (Richard Percy) has a swagger in his voice that supported the nobility of the character. I particularly enjoyed the interaction between Portillo and Richard Ollarsaba (Lord Rochefort, Anne’s brother) as they awaited their fates.

Just as I found a kinder, gentler Anne in this opera than I’ve found in history, I also met a new, more culpable Jane Seymour. Lauren McNeese’s mezzo-soprano voice helped play up the adult emotions of her character. The final meeting between Anne and Jane was a meeting of equals and therefore more interesting. Anne recognized that fates has left Jane “no other means of escape” and forgives her. But among equals that decision more is more honest than charitable which makes Jane’s reaction more poignant. Jane recognizes that forgiveness from Anne is the first step into the fate she would like to escape.  And it’s not clear whether she’s afraid of the overwhelming guilt or that she shall meet like this again with a younger women, who she shall have to forgive.

Spoiler alert: Anne is not beheaded on stage—because this isn’t a movie. If you think Anna Bolena is going to be like The Other Boleyn Girl with a better score, think again. It is different. The characters are different. The motivations are less sinister, the results almost bleaker because of the emphasis of fate. The score is definitely better.