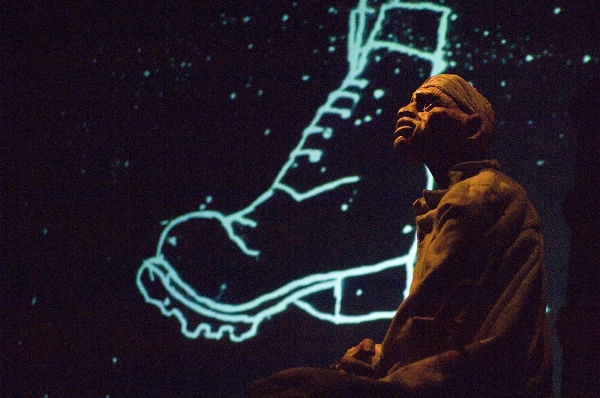 The Walker Art Center continues their Adventures in New Puppetry series this weekend by hosting South African artists William Kentridge and Handspring Puppet Company’s production of Woyzeck on the Highveld, an adaptation of Georg Buchner’s play about a man tortured by society who ultimately kills his common-law wife. The production is being staged this weekend at the Walker Art Center.

Originally premiering in 1992, the production re-set the play about a 19th-century German soldier in the midst of Apartheid, using rod-manipulated puppets, live actors, and animations created by Kentridge. The play was the first of six collaborations between Kentridge and Handspring.

Bruchner’s original play, which he began writing in 1836 and remained incomplete upon his death in 1837, follows the story of a young soldier, Franz Woyzeck, who has a common-law wife and a son not blessed by the church. Needing money, he hires himself out to be experimented upon by the local doctor and performs menial jobs for the captain. Woyzeck experiences a mental breakdown while meanwhile his common-law wife, Marie, has an affair with the local drum major. When Woyzeck confronts the drum major, he is beaten up, and the play concludes with Woyzeck stabbing his wife to death.

In Handspring’s adaptation, many of the main plot points remain, though the setting is different. The puppets, whose mouths do not move, are still nevertheless rich in expression. Operated by two people, the puppets become truly alive: every gesture, every movement is pregnant with meaning. Kentridge’s animations are both clever and at times just astounding, adding to the emotion and context of the piece.

Walker performing arts curator Philip Bither says Bruchner’s original play was way ahead of its time, both for its fragmentary nature and also because of it’s working class lead character. Handspring brings a “wonderful joyous quality,” he says, to the very bleak quality of the text, and the company’s production, in collaboration with Kentridge’s beautiful animations, bring a contemporary quality to the production making it “fresh and relevant.”

Bither calls Handspring one of the world’s finest and most acclaimed puppet theater ensembles, both for their craft in the creation of the puppets, which are incredibly refined, and for their performance style, which encompasses a range of work, including numerous collaborations with artists working in different media such as visual arts and live music. “They’ve transcended the puppet ghetto and become highly respected as theatre artists,” Bither says.

Woyzeck on the Highveld has become the company’s signature work in some ways, according to Bither. For one thing, it was the company’s first collaboration with Kentridge. The work also “continues to feel very relevant even though it was made during the Apartheid years,” he says.  “Issues of class, questions of globalization and class tensions are all part of the work. It certainly speaks to in some ways what South African communities continue to deal with,” he says, though the piece isn’t explicitly anti-Apartheid—it takes place in the 1950s, and it has a universal quality, Bither says.