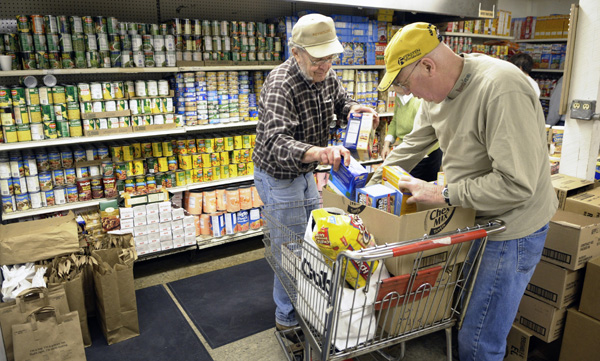 Rep. Patti Fritz (DFL-Faribault) was at a church service a few months ago when a woman in a neighboring pew tapped her on the shoulder. The woman told Fritz she had worked all her life, but was struggling to feed her children in light of her husband’s job loss. She asked Fritz to do something about it.

Now Fritz sponsors one of two bills targeted at hungry Minnesotans – a growing group. One in 10 Minnesotans visited a food shelf last year, with total visits up by 23 percent from 2008. As of November, more than 400,000 Minnesotans were enrolled in Food Support, the federal nutrition assistance program formerly called food stamps.

Fritz sponsors HF453 that would eliminate state-imposed asset limits on Food Support eligibility and raise the maximum qualifying income to about $30,000 annually. Another bill, HF2799, would increase the state appropriation to food shelves by $500,000 beginning in the current biennium. The legislation is sponsored by Rep. John Benson (DFL-Minnetonka).

“It is a fundamental human right to have sufficient nutrition,” Benson told the House Housing Finance and Policy and Public Health Finance Division Feb. 17. “It also affects all other areas of the society, from health care to even corrections – all these other issues that relate to this fundamental need for nutrition.”

The past two years have been especially tough for Minnesotans who were struggling even before the recession. According to the Department of Human Services, more than half of Food Support applicants each month since June 2008 had received similar assistance in the past five years. State officials also attribute much of the increase in the Food Support caseload to a 2009 policy change that allowed childless adults to stay in the program longer.

But county case workers and food shelf managers are seeing more of another demographic: the middle class. At Channel One Food Bank and Food Shelf in Rochester, visits were up by 30 percent each month of 2009 compared with the same month in 2008. Executive Director Cynthia Shaffer credits the increase to more first-time visits among the middle class.

“These were not people who were used to using the system,” she said.

Unemployment is a major factor, but it’s not just the jobless who need help. Byron Laher is president of Community Emergency Assistance Program, Inc. (CEAP), which runs three food shelves in the north metro. He says most CEAP clients are working and visit only when they’re desperate. The average family comes in three times a year.

“They are working, they are right on the edge,” Laher said. “And a car repair, kids need clothes, rent gets raised – those are the things that throw these families into a real economic turmoil.”

Under current law, some of those “on the edge” families don’t qualify for Food Support because they have savings and other assets totaling more than $7,000. Supporters of Fritz’s bill hope her proposal will remedy the situation.

“The reason we don’t want asset tests there (is) so if you lose your job for six months (and) you need the money for a short time, we don’t want you spending down your assets because then you’ll never be able to build yourself back up,” said Rep. Paul Thissen (DFL-Mpls), a member of the House Health Care and Human Services Finance Division. Division members laid the bill over Feb. 16 for possible inclusion in an omnibus bill. A companion, SF481, sponsored by Sen. Linda Berglin (DFL-Mpls), awaits action by the Senate Finance Committee.

Benson’s bill was also laid over for possible inclusion in an omnibus bill following his testimony before the housing division. A companion, SF1607, sponsored by Sen. Katie Sieben (DFL-Newport), is also before the Senate Health and Human Services Budget Division.

Food assistance got a big boost from the American Recovery and Reinvestment Act of 2009, which gave most four-member Food Support households an $80 increase in their monthly grocery benefit. The legislation also provided $100 million for the federal program that distributes commodity foods from the U.S. Department of Agriculture to states, where food banks allot goods to food shelves, soup kitchens and shelters.

Donations to food shelves are also up, but not enough to match demand, said Colleen Moriarty, executive director of Hunger Solutions Minnesota.

“The charitable system alone simply cannot handle the crush of people that have found themselves in the position of having little or no income at all for a substantial period,” Moriarty said.

The challenge for lawmakers is how to address the need when so many issues are high-priority and high-cost. Broadening access to federally-funded Food Support wouldn’t have a direct impact on the state budget, but as Rep. Laura Brod (R-New Prague) observed, the federal dollars need to come from somewhere.

“It’s not free money. It’s not separate money,” she said. “It’s all money that comes out of the pockets of the hard working people of this state.”

Bill supporters maintain the cost is worth it.

“I understand the dramatic economic strain that you have in dealing with the budget,” Moriarty told members of the housing division, “but your neighbors and your friends are dealing with this on a daily basis.”