All My Relations Arts (Mitakuye Oyasin) (AMRA), the arts programming operated in Ancient Traders Gallery, located on Franklin Avenue, will be sponsored by a new organization following the close of its existing location and an end to its relationship with Great Neighborhoods Development Corporation (GNDC). The move, seen by many as a hopeful and positive step for AMRA, has also caused some trepidation for the much loved arts programming that has been a positive pillar of the Native American community, both in the Phillips neighborhood and throughout the state. The gallery space will now be leased by a new tenant.

Using Art to Build the Neighborhood

Ancient Traders Gallery was established in 1999 by the American Indian Business Development Corporation (AIBDC), which two years ago changed its name to Great Neighborhoods Development Corporation (GNDC). Shirlee Stone, who named the arts programming Mitakuye Oyasin (All My Relations Art), was the Director of Special Projects for AIBDC at the time. She said that when the gallery was first built, the neighborhood along Franklin Avenue was “crime ridden.”

“One of the problems in the early nineties was safety,” Stone said. Having a place to show art was one way that the neighborhood was able to change. “We were trying to open businesses and use art as a way to help change the neighborhood,” Stone said. “We wanted to make the community seem friendly and exciting.”

AIBDC also redeveloped Franklin Circles Shopping Center, and developed the adjacent Ancient Traders Market, according to a research report, “More than Bricks and Mortar” written for Projecdt Pride in Living by Will Delaney. According to Delaney, the additions of Maria’s Café and the gallery, as well as changes in landscaping and design, increased the vibrancy of the area. 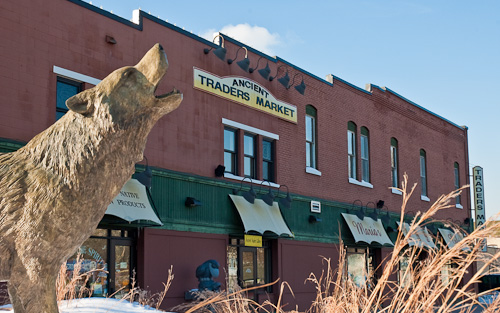 Over the years, AMRA has brought tens of thousands of visitors through the gallery doors from all over the state and from around the country, according to Stone. The art was also sought out by international travelers. “It was an incredible success for the community,” she said.

The gallery has been a vital hub for local Native artists. Doug Limon, a native artist, said the gallery was important because it provided an outlet for Native artists to show their work. “It’s just so important to the whole community,” he said, “and to so many artists throughout the region.

Jonathan Thunder, a Native American Painter, said the arts activities were a positive for the community, particularly AMRA’s youth programming. “We’ll bring in kids from programs that may not know that it’s a possibility that they could be an artist in their life,” he said. Thunder also said that he appreciated that the gallery showed contemporary work and stayed away from romantic Native American imagery such as “an Indian princess with a deer in the background.”

In 2008, the American Indian Business Development Organization became Great Neighborhood Development Corporation, causing controversy and anger in the Native American community. According to Steve Brandt in the Star Tribune, community members met at the time to protest the change in the name and GNDC’s $2.5 million sale of the Franklin Business Center, which housed, among other tenants, the Native American Community Clinic.

In the Star Tribune article, Kelly Morgan is quoted as saying, “There’s been mission shift, mission drift,” and warning that GNDC’s new focus in North Minneapolis would undermine work that’s still to be done on Franklin.

“I feel like we had the wool pulled over our eyes,” said Mike Forcia, owner of the Wolves Den, who was a tenant with AINDC, and then Great Neighborhoods, from 2004 to 2008. “I assumed they wanted to work with Native people,” Forcia said, “But it seemed like a front.” He said a number of Native people in the community hold a grievance against Great Neighborhoods for raising funds under the auspice of helping the Native community, and then shifting away from the Native focus. “They raised something like $21 million,” Forcia said, “It’s just another example of a Native Organization being taken over by Non-natives.”

“I was under the impression that the whole thing was funded for the Native American community,” said Native artist Douglas K. Limón . “They requested money for Native American businesses.”

Greg Bellinger, who runs Northland Visions, formerly Northland Native American Products, which was started by his father, said he was a little disappointed that Great Neighborhoods wasn’t more instrumental in building the Native American community.

“I think they had some big plans when they started the thing,” he said. “They ripped up Franklin Avenue the first year we were here.” He said that Ojibwe, Dakota, and Plains natives from South and North Dakota all came to the Phillips area to live. “That’s one of the reasons that the Indian center was built here,” he said, stressing the importance of recognizing and preserving that history. “You start with an organization and you have high hopes that they are going to continue to help the community grow,” Bellinger said, “but I understand it’s a business aspect. When you are done with the project you gotta start a new project. I would rather see this neighborhood be under a more Native direction.”

Heid E.Erdrich, who took over the curatorial duties of the gallery when Shirley Stone retired in 2006, wrote in an email that AMRA has been building its independence “in the hope that we would find an appropriate parent organization to which All My Relations Arts would be an asset.” She stressed that it was important to highlight that the arts programming was moving to a new parent organization, rather than that the gallery was closing.

Erdrich said in an interview that, in 2008, AMRA was accepted to ArtsLab, a three year learning and technical assistance granting program, with the understanding that AMRA would seek to find a new parent organization. Erdrich said that some time this fall, Theresa Carr, Executive Director of GNDC, said she thought it was time for AMRA to move. “The timing was initiated by GNDC,” Erdrich said. “But really it was pefect, since that was part of our plan.”

“We’re tightening our belts, and cutting back on staff,” Theresa Carr said. According to Carr, GNDC has subsidized AMRA with in kind support at an average of $40,000 a year, which includes rental space, staff, copy machines, and computers.

“The reason we want them to transition to NACDI is because NACDI has a commitment to Native American culture,” Carr said. “Over the last couple years we haven’t been able to support Heid. We haven’t supported her as much as the program really deserved to be.” When asked why GNDC changed the name of their organization in 2008, Carr said she had another meeting to attend to and that the conversation was leading off topic.

Justin Huenemann, Director of the Native American Community Development Corporation (NACDI), said that NACDI is in talks with Erdrich about supporting AMRA, although final plans have not been worked out.

To those who have loved the gallery, it’s an uncertain time. “I was completely blindsided by the news,” said artist Doug Limón, who has shown his work in the gallery. “We’re between a rock and a hard spot right now.”

“Well, it is sad,” said Gordon Coons, an artist and board member for AMRA. “It is going to be a losing a great thing that also drew people to the area… It’s the only place we get together as a group, where we get to visit each other.”

Coons and Limón, though they have trepidations, said that they were hopeful that it will all work out for the best.

Peter Morales, who was commissioned by Minneapolis to create the drinking fountain sculpture installed outside of the gallery, said he felt that the spirit of the place will remain.

AMRA’s next exhibit, Original Green, begins at Mill City Museum in May and will also be exhibited in Phillips at a location to be announced in late 2010 or early 2011.