This September, Ananya Dance Theatre (ADT) presents the third installment of a four-part series exploring how women around the world experience violence and trauma, and how they resist it and empower themselves. On July 10, the dance company gave a short preview of the new work, Moreechika: Season of Mirage, which takes in the oil industry.

Like Kshoy!/Decay!, whose theme was mud, and Tushaanal: Fires of Dry Grass, about the gold trade of Africa and Asia, Moreechika: Season of Mirage is much more than a dance piece, but a collaborative work of art where the music and soundscape by Laurie Carlos and composer Greg Schutte and the shadow puppetry by Annie Rollins are as much a part of the voice of the piece as the movement.

Rollins’s Hungry ghost shadow puppets were projected onto a large screen behind the performers, and almost seemed to comment on the developments in the foreground. Sometimes, the shadows of the dancers fell onto the screen as well, adding to a sense that the ghosts were a part of what was happening, or that at times the dancers even would transverse into the ghost world.

For the preview, the company showed different sections that will end up being part of the final performance. It began with Vision, an improvisational piece that began with Ananya Chatterjea, Artistic Director of the company, alone onstage as Laurie Carlos created an accompaniment through poetry and vocals. Chatterjea depicted a person in a moment of crisis, as if in a frenzy of emotion as the hungry ghost shadow puppety loomed behind in her, it’s dark circular eyes looking both menacing and sad.

This was followed by a section where the dancers made a circular military formation, at first all in step with each other, but eventually making wild movements as if going mad. They ended up all collapsed in a pile, which transitioned into the next section, Pelican, where dancer Chitra Vairavan emerged, contorting her body to look as if she were a bird climbing out of an oil slick, her leg wrapped around her shoulder, while ritualistic vocals, drums and found sounds highlighted this intense moment.

After Pelican, dancer Orlando Hunter begins to dance seductively, luxuriously with a long shiny black plastic. The first male dancer ever to perform with the company, Hunter stands out for obvious reasons but also because his energy in this section is so different from the rest of the dancers in the performance. It’s a little unclear why the two most stunning moments of the show—Vairavan’s haunting pelican, and Hunter’s erotic oil dance are also associated with the most disturbing aspects of the oil industry- pollution and greed. Perhaps Chatterjea intentionally created that disconnect in order to draw attention to these aspects.

After the Plastic Desire section was a nightmare about progress, in some ways recalling the earlier military section, with the dancers descending into chaos, creating bizarre crazed expressions with their faces, their mouths and eyes wide open. The end of the preview- Beauty, included a solo by Hui Niu Wilcox, who concluded by running off with the sheet of plastic with flourish. Here Chatterjea used the title Beauty in an ironic way—how else to explain the plastic—a symbol of our society’s dependence on oil- to create the gesture?

The performance—which no doubt will still be developed before the company goes on tour to Trinidad for the world premiere—is the most disturbing of the three parts so far shown in the series. That’s probably because our world’s dependence on oil hits so close to home. It’s in everything we do- in how we package our food, how we drive our cars, how we heat our homes, how we wash our hair. The company offers no easy answers, no solutions. Rather, it illustrates the horror of what our world has come to be, and does so in a way that is both gripping and unsettling. 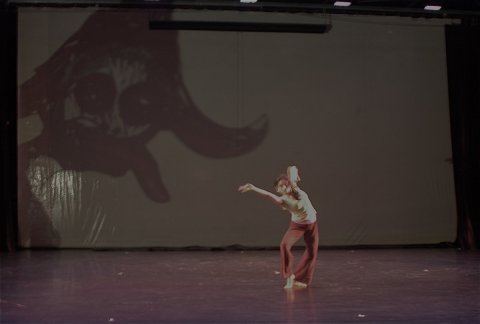 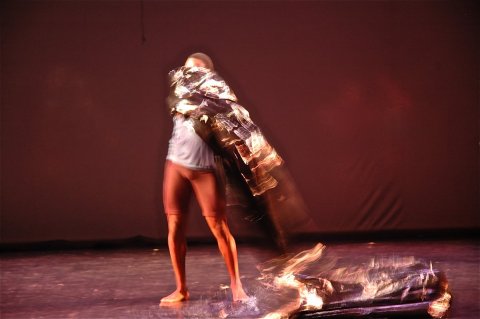 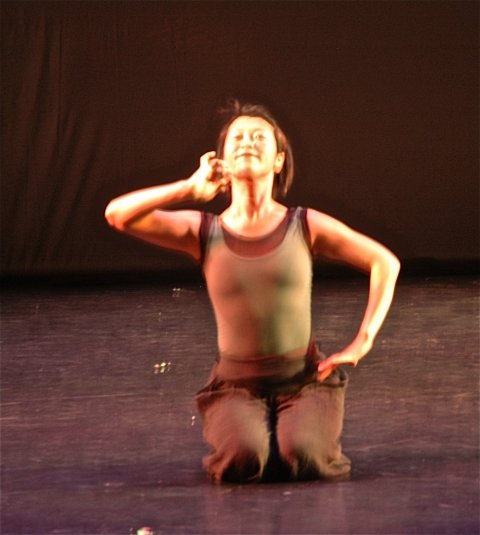