At Art-a-Whirl, one studio you can’t miss is the one belonging to Amy Rice. She’s a Minneapolis-based artist whose star is just beginning to rise on the national scene. Her work has been shown in a diverse array of settings at home and abroad, from Palmer’s Bar on the West Bank to the Carmichael Gallery in London. Critics have praised her style—which makes use of spray paint stenciling and pastel palettes to create a fragile world of women and children in natural settings—calling it a mix of “cute” and “quirk” and comparing her work to that of another artist she’s exhibited with—Banksy.

Now she’s made an even bigger step: In April, she left her long-time post at Spectrum ArtWorks in order to pursue her art full time.

Recently, Rice opened the doors of her spacious Northeast Minneapolis studio for a tour and interview. In person, she is as gentle and friendly as the subjects she depicts. She appeared, all smiles, at the front entrance to the California Building, accompanied by her canine companion Ella who, in spite of her age and health, was having a “good day.”

It’s no coincidence that natural and pastoral themes figure so prominently in Rice’s work. She grew up on a farm in northern Wisconsin, and in many ways, her heart still resides there. 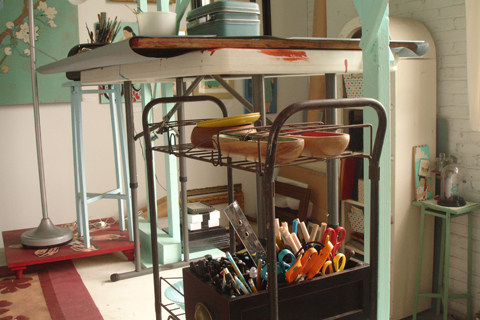 Rice was raised in an atmosphere that was both creative and unconventional, and says there was never a time when she didn’t see herself as an artist. She describes her mother as a “storyteller”—someone who approached everyday life with a sense of magic, in which every thing, including every inanimate object, had a life of its own. “I have this ridiculous sense of whimsy that comes from my mother,” says Rice. But sometimes, she says, the whimsy “went overboard” and became “a little weird.” She recalls a time when she lost an argyle sock. Her mother wrote her a letter from the missing sock: “Dear Amy, I am so lonely in this world without my soulmate.” Rice says that daily activities sometimes trigger in her a tremendous, inexplicable sense of loss. But she has found a way to make sense of these feelings—especially after getting to know Native Americans and others who were raised within animistic belief systems.

Rice went to college at Augsburg and studied sociology and women’s studies. She received no formal art training, although she took a lot of art history courses. Upon graduating, her goal was to become an organic vegetable farmer. So she moved back home to northern Wisconsin, where she courted, for a while, what she calls an “alternate, happy life she didn’t choose”—settling down on the land, fated to marry the boy next door and become a farmer’s wife. That scenario did not play out, but her time on the farm taught her something about herself. Whenever she brought her wares to the farmer’s market, she brought along small artworks she’d made. They sold quickly. In fact, she made more money from art than from produce. So at 28, she decided to call it quits on farming and move back to the city to become an artist. 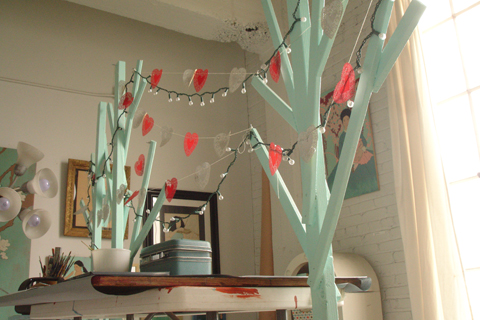 When she arrived back in Minneapolis in the late 90s, she immersed herself in city life. She says that, in the neighborhood where she lived, there were many conflicts between Native Americans, people in poverty, and the police. These conflicts erupted into full-scale demonstrations, to which Rice lent her skills, making stenciled signs and street art. At the same time, she started life as a working artist. She assembled a body of work, bought a camera, and put together a professional portfolio. But she saw art and activism as separate pursuits until two watershed events fused them together in her mind.

The first event was a co-created series she displayed at Hard Times Cafe, called See No Evil, featuring stencils of Fisher-Price Little People with their eyes, ears, and mouths covered. This show allowed her to explore the idea of stencil art as fine art. But she didn’t seriously pursue this idea until she saw the work of Chris Stain. The realization that she could bring the art of the streets to the gallery completely freed Rice from self-imposed limitation, and she began creating the body of work she is known for today. 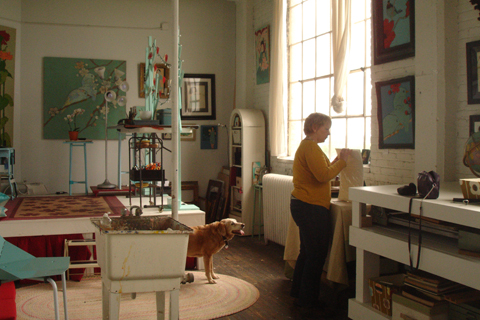 Fans and collectors may be surprised to learn that the process and materials Rice uses in her work today have changed very little from those early days. Rarely does she set foot into an art materials store. She says most of her supplies come from Home Depot—house paint, spray paint, plastic sheeting, Elmer’s glue. She spends many hours looking at other artists’ work—Jennifer Davis is a special favorite—to get a sense of what she likes. But she also draws inspiration from unexpected places—that robin’s egg blue that appears in the background of so many of her pieces came from a bike she once owned. She chooses subjects of great personal meaning and spends anywhere from a few hours to a few weeks working on a piece until it feels finished to her. There’s no telling how long it will take. The process has to unfold organically.

Rice has been told time and again about “the rules.” “I have a lot of friends who went to art school, and they have a lot of rules in their heads about what you should and shouldn’t do that I don’t have,” she says. But this lack of “rules” has led her to one innovation after another. How does she get those beautifully crackled, antique-looking backgrounds? “Elmer’s glue,” she says. And how does she get those tiny black lines into her stencils? “A burning tool,” she says—one with a fine tip. 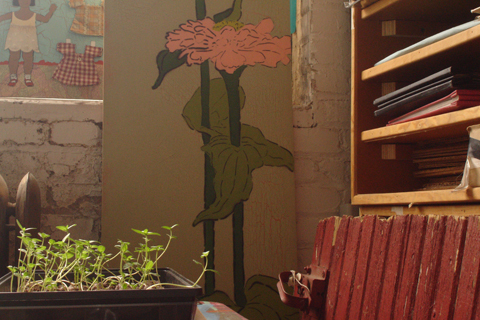 After Rice completed her portfolio and landed a few shows, she got her first arts job. Her work was spotted by the director of Spectrum ArtWorks, and she was hired to teach art classes for a now-defunct day treatment program called Span. The individuals in Span were developmentally disabled, mentally ill, and had some type of physical disability. At the time, the day treatment’s art program offered participants very little by way of a creative outlet. Rice describes what she saw: “For so long art in mental health was leather wallets and glitter and—seriously!—painted macaroni noodles.” Rice wanted something different: “I was an advocate for fine art, finished product, [something] you can hang on the wall and be proud of when you’re done.”

Once the program participants had mastered materials, craft, and technique, it was time for the next step—gallery showings. Shortly after Rice was hired by Span, Yuri Arajs opened Outsiders and Others Gallery and eventually recruited some of her students to show their work there. She says the gallery experience transformed participants’ lives: “I’m just making a name up—Dave—but Dave would say, ‘Hi, I’m Dave, and I’m schizophrenic.’ After [showing his work] Dave would say, ‘Hi, I’m Dave, and I’m an artist.’ It’s just that power of having a new identity—a real artist showing in a real gallery with white walls and lights and press.” 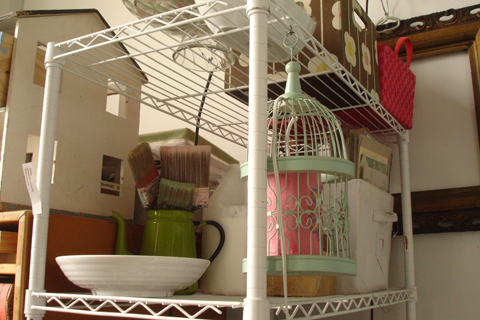 There have been changes since that time within the disability community. Funding cuts eventually did away with the arts programs, and eventually with the day programs themselves. But the changes haven’t all been negative. Rice says that many of the artists she worked with at Spectrum gained enough of a sense of self-empowerment that they transformed again—this time into activists and advocates. And when she left her post at Spectrum in April, it was with mixed feelings—she was, in many ways, sorry to leave, but both she and Spectrum were ready for the next step. Rice became a full-time artist, and an artist and activist with disabilities, Christi Furnas, took the helm.

So much of how we experience life has to do with perception and belief. Throughout her life, Amy Rice has eschewed prejudice and labeling, choosing instead to interpret situations and people in her own way. Time and again, she imbues everything she touches with a life of its own—bringing a little magic into every day.