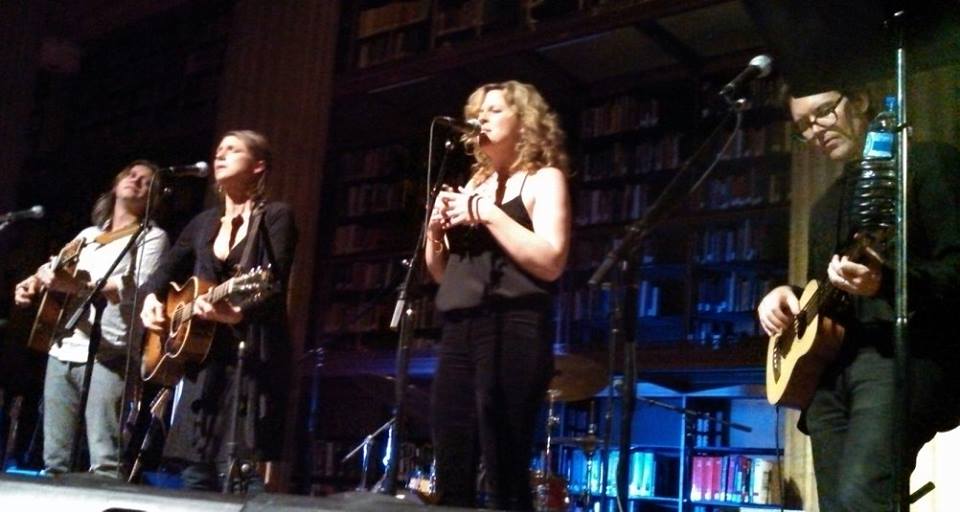 Thursday night the stacks were swaying with Amy Helm and Martha Scanlan on Real Phonic Radio at the James J. Hill Reference Library. Real Phonic Radio is a monthly show featuring local and national music – generally with a country drawl – at the library. It was the largest crowd I’ve seen at event – with standing room only and plenty of folks watching from the second tier stacks.

Amy Helm (daughter of The Band drummer Levon Helm and singer Libby Titus) brought passion to her songs. He voice has am almost twangy crooner quality. She sings sexy sounding songs that make you want to wiggle. Minnesota native Martha Scanlan had a voice that my daughter called good and soft and loud. Her voice is higher and somehow sweeter, playing music that makes you want to sway more than wiggle. Together they created a smooth harmony that bounced off the walls of majestic library reference room. While each singer had a designated set – truth is they were both up and supporting each other through most of the show.

The house band – Erik Koskinen, Paul Bergen, JT Bates and Lizz Draper – opened and closed the show. They played a couple of new sounding songs and at least one favorite – Tell Me It’s True. I always enjoying their music.

The event always has a hometown, homegrown feel. It’s produced and performed by musicians and people who clearly have a love of the arts. Molly Maher gave a touching introduction to Amy Helm, speaking about seeing her at a festival. Her introduction punctuated the love of music in the room that makes everyone feel a little bit like family. Emcee Thom Middlebrook also does a good job setting the stage. When I was a kid we used to go see Garrison Keillor regularly and I never really got what was fact and what was fiction. (So we’re really on the radio, but there’s no real Lake Woebegone? Huh?) Middlebrook is helping to perpetuate the confusion for the next generation. I spent a few minutes explaining to my 9 year old that the library doesn’t actually make $2 million a year in overdue fees!