Pete Lebak waits for customers in front of his one-chair barbershop Saturday on University Avenue. Despite a drop in business during light-rail construction, Lebak is determined to keep his shop operating, as he has done for the last 32 years. (Photos by Mark Van Cleave)

The barber shop doesn’t have a cash register or a computer. The space is filled with deer heads, old chairs and plants.

At Pete Lebak Barber Stylist, a haircut is $12 flat.

Pete Lebak, 74, has been running his one-chair shop on University Avenue for 32 years. He keeps a list of his devoted customer base in a red notebook.

Since the start of the Central Corridor light-rail construction, business has declined, with fewer regular customers and virtually no walk-ins.

“The light rail is killing all of us. It is beating us to death,” Lebak said.

Friday afternoon was slow with only two customers — a common occurrence these days.

As he sat in the chair, a red smock flung around his neck, client Bill Richardson chatted and joked with Lebak. Richardson, a senior assistant Hennepin County attorney, has been coming to Lebak for haircuts for 20 years.

It’s because of customers like this that Lebak said the shop is not going anywhere –– the relationships he’s formed with his patrons will keep him there. 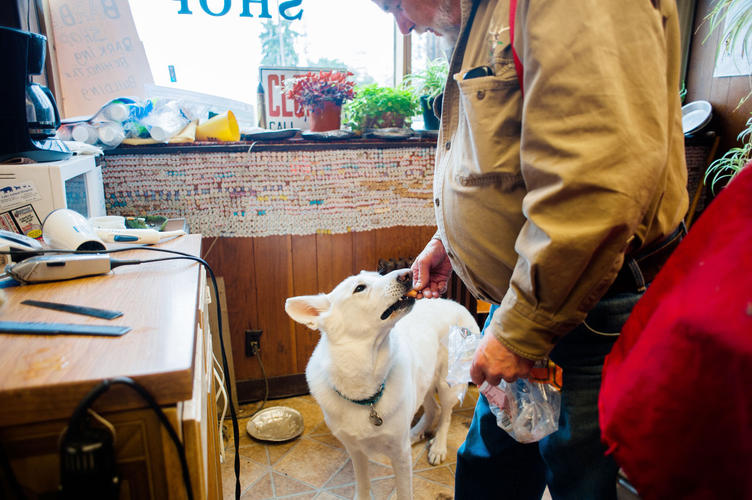 Pete Lebak gives a regular’s dog a treat while his owner waits for his turn in the chair.

Lebak started cutting hair at 13, learning from his grandfather, also a barber.

While attending the University of Minnesota, he worked at a barbershop that has since left Dinkytown. After serving in the Army, Lebak came back to Minnesota to attend barber school.

He opened four shops but closed three after his partners left. The lease for the fourth shop was running out when a regular customer offered Lebak a spot in a building he owned on University Avenue.

“I told [the owner] I’d be here only a short while until I found something else,” Lebak said as he worked on a customer’s hair. That was 32 years ago. “I’m still looking,” he said with a smile.

Lebak’s store is equipped in much the same style as when he first opened it, the only real additions being a collage of customer pictures and a collection of artifacts from Norway decorating the walls. 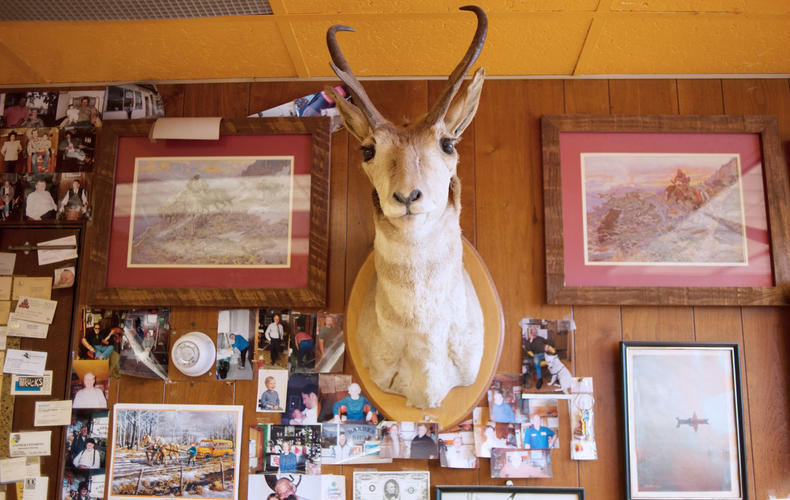 Peter Lebak, originally from Wyoming, said he set up shop in Minneapolis after “evil tidings” brought him to Minnesota.

“I don’t think you get any more boutique than this,” Richardson said.

He sat calmly in the chair with his eyes closed and told Lebak about work. Richardson wasn’t talking to a barber –– he was talking to a friend.

“I really love the people; they’re great,” Lebak said. “You get to come here, talk to your friends all day, they pay you and you go home. [Friendship is] what this is all about.”

Lebak’s customers come from all over. One lives Alexandria, Minn., and another drives from Wisconsin twice a year. He even has customers from Virginia.

He can list their names without missing a beat, give the names of their children, talk about their childhoods and their jobs. He has known some for almost four decades. 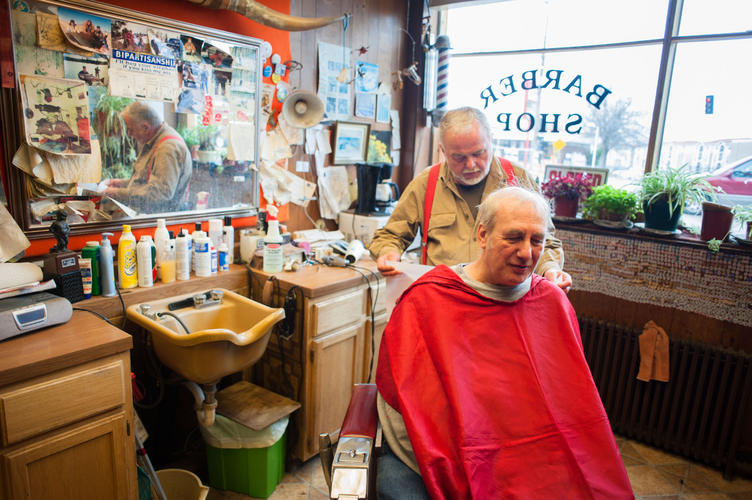 Regular customer Tom Maciejko has gotten his hair cut by Lebak about every six weeks since 1985. The St. Paul native explained, “When there’s something I like I stick with it.”

The construction tearing up University Avenue is visible from the shop’s window.

Since it began, access to the shop has been limited. There’s a parking lot in the back, but it’s not as convenient as the street parking that was once available, Lebak said.

The Metropolitan Council tries to help out the affected businesses, said Laura Baenen, spokeswoman for the project. Before construction began, outreach staff went door-to-door asking businesses about their access needs.

“We’ve tried to make clear that there will be access, but it may be different — it has to be,” Baenen said.

The council offers forgivable loans to small businesses if they show revenue changes compared to taxes and receipts from the last three years, Baenen said. Money is also available to improve storefront visibility until construction is completed in 2014.

But the building housing Lebak’s barbershop has been empty except for him and a pharmacy since June last year.

“[Lebak] left me a phone message saying ‘Nobody’s been here all day, come in and get a haircut,’” Richardson said.

But not all weeks are bad weeks for Lebak.

“You never know how many customers you’ll get,” he said. “This week has been the worst, but I had three great weeks before it.”

Lebak is fairly busy on the weekends, Richardson said. “But you can’t make a living just on Saturdays.”

Despite the frustration of construction, Lebak is determined to stick it out in his shop.

“I have gotten so much encouragement; I’m going to hang in here until they drag me out feet first or I get kicked out.” 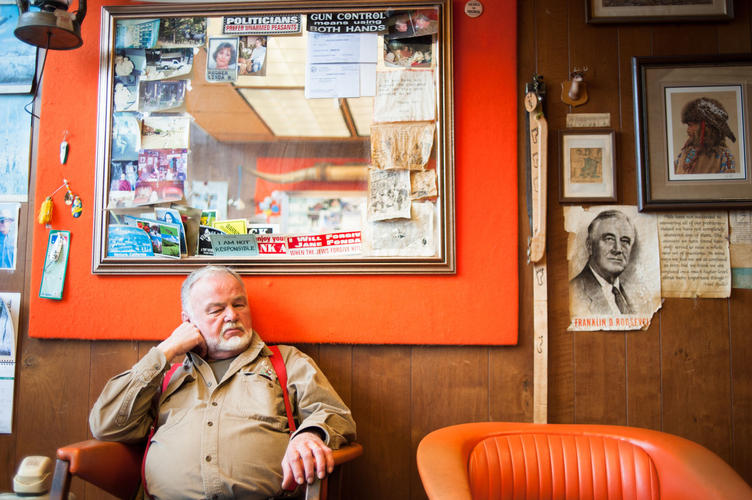 Lebak says he only has four rules for his customers, “No hittin’, no spittin’, no group sex and no breaking the furniture.”