As people mobilized in the streets of Minneapolis to demand that Wall Street be accountable for creating the economic crisis, SEIU Local 26 President Javier Morillo-Alicea was thousands of miles away – hearing a similar message in Sun City, South Africa. Morillo-Alicea represented the 2.1 million members of the Service Employees International Union at the 3rd National Congress of SATAWU, the South African Transport & Allied Workers’ Union, composed of 165,000 workers in several industries, including security and cleaning. He found that workers in both the United States and South Africa are discussing the same issues, such as rising inequality, and grappling with similar challenges, particularly concerning their role in advancing a progressive agenda. 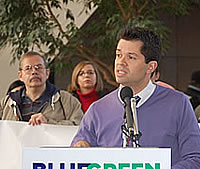 “The labor movement [in South Africa] is at a very interesting moment,” he said in an interview upon his return. While the decades-old system of race-based oppression known as apartheid has ended, the country still faces deep poverty and high unemployment, especially for young people.

SEIU and SATAWU have an on-going relationship because they deal with the same employers.

“Our major employers in both cleaning and security are global companies” like Securitas and G4S Secure Solutions, formerly known as Wackenhut, Morillo-Alicea said. The unions regularly compare notes and support each other, as they did when South African security officers went on strike in 2006.

The unions face similar issues when it comes to political activity, Morillo-Alicea noted.

SATAWU is a strong supporter of the African National Congress, the political party that controls government in South Africa. SEIU has longstanding ties to the Democratic Party and played a significant role in electing Barack Obama.

Yet the ANC has alienated SATAWU members with some of its policies – and the same problems have arisen with Obama and other elected officials in the United States, Morillo-Alicea said.

In both countries, “we’re questioning whether the closeness of the labor movement to the party really makes sense,” he said. “Do we get out of the political process what we put into it?”

The Occupy Wall Street movement and other initiatives to challenge transnational corporations and the wealthy are growing. South Africans were excited and curious about the actions taking place in the United States, Morillo-Alicea said.

Members of SATAWU, which openly advocates socialism, have a sophisticated critique of capitalism and its effect on workers in the global economy. SEIU Local 26 is part of Minnesotans for a Fair Economy, which recently coordinated a series of actions in Minnesota focused on Wall Street, banks and the need to create jobs and stop home foreclosures.

“The superwealthy and corporations are taking over our democracy,” Morillo-Alicea said. “In the end, we can ask whatever we want of politicians, but if we don’t do something about the inequality of wealth, there are limits to what they can do.”

While the SATAWU convention was marked by intense debate on serious issues, the Local 26 leader was struck by the festive atmosphere, which included singing before and after each speaker, who also were sometimes interrupted by song. U.S. unions would benefit from such energy in their proceedings, he said.

“I’ve never heard so many union songs in my life,” he said, smiling.