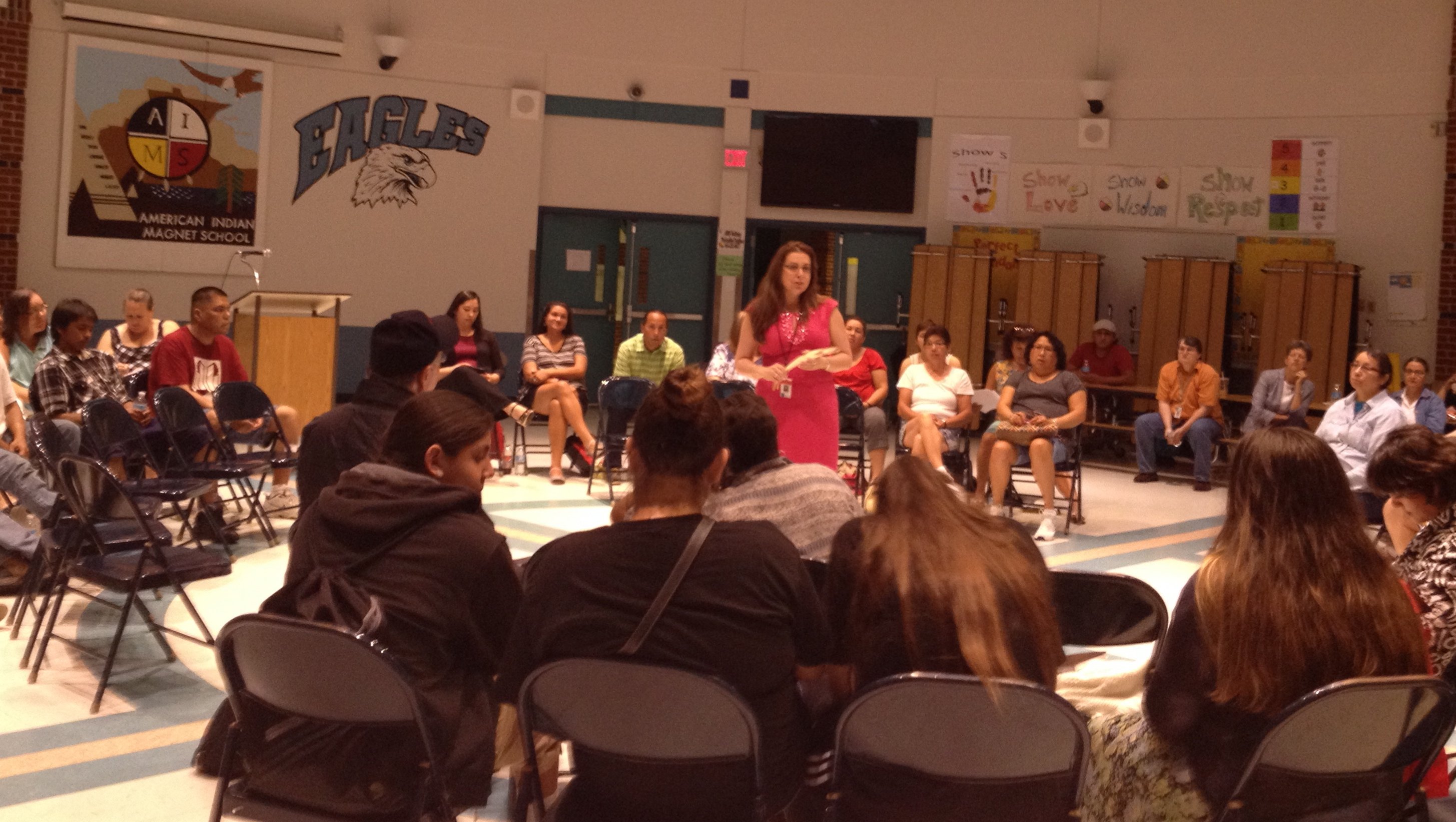 Recent controversies within the St. Paul American Indian community over programs associated with St. Paul Public Schools (SPPS) have led to the director of the SPPS American Indian Education program requesting a reassignment within the district. Questions about the future of the program continue. Among the controversies: adoption of former director Rosemary White Shield’s proposed New Day model, staff restructuring, and criticism of how elections of the two Indian Education Parent Committees were conducted. The recent controversies add to ongoing criticism that Indian Ed fails to serve all Native students adequately and that Native students continue to be affected by the achievement gap.

There are two American Indian Education parent committees ‑ the Title VII committee and the Johnson O’Malley committee, which are funded by two separate federal grants. Both groups usually meet together, according to Nicole MartinRogers, a member of the Title VII Committee. The two groups have different criteria for participating, with the Johnson O’Malley committee requiring that parents have a child in the district who is enrolled with a tribe.

Angie Thornhill, who serves as the Johnson O’Malley board chair and is also on the Title VII parent committee, said that while Title VII is an advisory committee, the JOM board is a governing body, where parents decide how Indian Ed funding can be spent. Title VII, meanwhile, “works in collaboration with district and Indian Ed,” Thornhill said.

Pretty much all sides agree that the elections for next year’s committee members for both committees didn’t go well.

According to Thornhill, the initial elections for the two parent committees had to be redone, since there had been a person misidentified on the ballot when they were first conducted in April. A second election was held in May at a Powwow at American Indian Magnet School.

According to Thornhill, the committee decided to keep the names on the ballot that had been on it for the first election, but once the verification process started, “almost all those names weren’t eligible,” she said. Thornhill said ballots were mailed out to parents and sent home in children’s backpacks.

However, when the second elections took place at the Powwow, there were no names on the ballot. Parents had to write in names. Parent Maggie Lorenz said, “No one knew who they were supposed to vote for.”

In a written response to a petition about complaints about White Shield, the New Day Model and problems surrounding the recent parent committee elections, Superintendent Valeria Silva wrote, “SPPS and the Parent Committee are aware of the challenges many parents faced during the nomination and voting process. While a range of improvements is needed, the SPPS and Parent Committee believe it should seat those candidates elected in May as committee members.”

Questions about the New Day Model

The New Day model was developed by Rosemary White Shield, who was the director of the SPPS American Indian Education program from October 2013 until mid-June.

According to Thornhill, White Shield’s New Day model came about as a result of the parent committee’s resolution at the end of the 2012/2013 school year, which called on the director to investigate each and every grant that Indian Ed receives. “Grants have not been in compliance for some time,” Thornhill said. “We wanted evaluation for all of the programming.”

White Shield’s first priority, Thornhill said, was to basically do an audit of each grant. Previously, it was “confusing about how everybody was paid and what job they were supposed to do,” Thornhill said. What White Shield found was that some positions weren’t in line with any of the grants. “They were piecemealed together,” she said. “In order to be compliant, some positions needed to be eliminated and new positions needed to be made.”

Thornhill said the parent committee found themselves at a crossroads, and described two choices: “We stay with how Indian Ed was, which we knew isn’t working. Our achievement is in a downward spiral. That’s business as usual. Or we take a chance on this model that was presented in front of us. We decided we were going to back that, but we didn’t ask clarifying questions.”

Thornhill was impressed that it was an actual plan, and that White Shield wanted to partner with different people in the community, and that it was open to how it would be laid out in the community. “I can’t speak for anyone else — that’s what made me want to support it. It wasn’t telling me what she was going to do.”

As a committee member, MartinRogers said she voted by an email vote (because the group wasn’t able to get quorum at meetings for a vote) in favor of a resolution that approved White Shield’s proposed New Day model. According to MartinRogers, she had a “slight degree of discomfort” in voting in favor of the resolution. “A lot of it was vague,” she said, but “there was some pressure to get it passed.” According to MartinRogers, she was unaware when she voted for the resolution that the New Day Model included eliminating three staff positions within American Indian Ed.

According to a PowerPoint presentation about the resolution, the Parent Committee will work with Indian Ed and the district administration to develop and implement a “culturally-based, student-centered” model for American Indian students, provide culturally relevant curriculum for students of all races, provide “culturally-responsive” trainings for teachers and staff, improve attendance and behavior issues, provide more culturally-based after school activities, improve communication between the district and the Parent Committee and improve racial identification of Indian students. The PowerPoint also outlines that the model will “address structural and resource challenges within the American Indian Studies (AIS) program and “implement culturally responsive evaluation plans to assess the impact and effectiveness of Indian Education and American Indian Studies programming.”

The New Day model itself outlines that in addition to staff development, “Job descriptions will be adjusted to align with clearly defining roles and responsibilities as directly congruent with the overarching outcomes of the Oshki Giizhigad (New Day) Model,” according to a report about the model written by White Shield and dated January 1.

After the committee voted in favor of the resolution, it was passed by the school board on April 8.

At a parent and community meeting held at American Indian Magnet School on June 16, parents, students, community members and staff sat in a circle for nearly three hours discussing issues the community wanted to be addressed. SPPS Superintendent Valeria Silva attended and participated in this meeting. Many of the speakers talked about frustration with the way Indian Ed had been operated in the past year since White Shield took leadership and expressed concern about the staff members whose positions have been eliminated.

Stephanie Schroeder, a teacher in the American Indian Studies program at Harding High School (which is a separately funded magnet program not to be confused with Indian Ed), said this past year has been very difficult. “I feel like almost a knife was stabbed into our family, and our family was cut apart this year,” she said, adding that two of the staff members who have left Indian Ed were there for any student that had a problem.

Nicole Other Medicine, a social worker with Indian Ed, said that she has “big concerns about staffing,” saying that two social worker and one counselor position had been eliminated. “We are understaffed,” she said. “How do we serve our children when there’s not enough of us?”

In a written response to a petition by community members over White Shield’s leadership, Silva released a response on June 13, verifying that the district has moved forward with a staff restructuring plan that White Shield had proposed under the New Day model that the Parent Committee had approved. “Because personnel matters are private information, we can’t discuss the details of any employee’s specific situation,” Silva’s response stated. “However, we can say that none of the program’s staff have been terminated (“fired”).” The statement goes on to say that staff whose positions were eliminated from Indian Ed “have rights to positions elsewhere in the district.”

At Monday’s meeting, Silva announced that White Shield had asked to be reassigned to a new position, but didn’t clarify which position that would be. White Shield was not available for comment or interview, either before or after the June 16 meeting. [The Daily Planet first requested an interview with White Shield on June 6. She has not been available for an interview and on June 19, the SPPS Office of Communications, Marketing & Development advised us that she would not be available for at least the next few weeks.]

Besides issues surrounding the former director, the June 16 meeting also raised other issues, such as overcrowding and bullying at American Indian Magnet School, which has 30 percent Native students. Chief Engagement Officer Jackie Turner responded that the school has capped enrollment for next year, and Silva promised to address bullying concerns.

In addition, some people at the meeting said that not all American Indian students were getting the services they needed. Nathan Taylor, who graduated from Central High School, said his need weren’t met because of which school he attended. After attending American Indian Magnet School, “for the best year of my life,” Taylor “left behind a sense of community,” when he went to Central.

“Those dollars need to provide services for all of our children, not just children at one school,” said Laurie Harper, whose child attends American Indian Magnet.

David Cournoyer, who serves on the Parent Committee, said that right now, the community is “operating with handcuffs.” Speaking to a need for a return to relationship building, Cournoyer said that the parent voice is not the first thing the district listens to. “Who are they listening to? 22 union leaders,” he said. “They are running the system with rule books.” Referring to another person’s comment about how one of the staff whose position was eliminated used to greet students at the door, Cournoyer said that volunteers from the community could be doing the same thing. “The rules are killing us,” he said.

At the end of the meeting, Silva said that she has asked Elona Street-Stewart, a former school board member who is American Indian, to help work with the district and the community to find solutions. “I’ve asked Elona to give wisdom and help put ourselves together,” she said.

Janice LaFloe, who facilitated the meeting with filmmaker and community organizer Syd Beane, called for people to come forward and speak with her after the meeting to be part of an ad-hoc committee to guide the next steps.