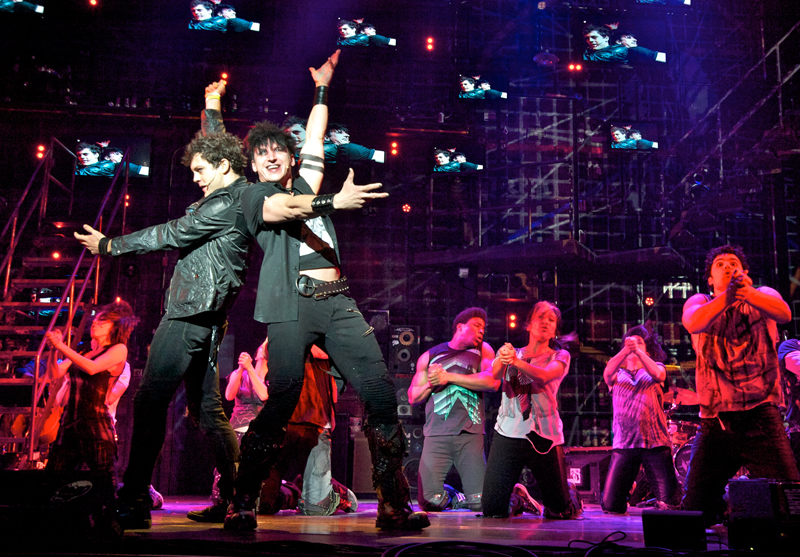 “Every generation sends a hero up the pop charts,” sang Paul Simon. And every generation, in due time, selects a couple dozen of its most agile young representatives to take to the stage and dramatize its defining struggles in the form of musical theater. The Baby Boomers had Hair, Gen X had Rent, and now the Millennials have their own generational pageant in the form of Green Day’s American Idiot.

When I spoke with the show’s music arranger Tom Kitt for a Vita.mn preview of the show’s Orpheum Theatre run, he told me that “American Idiot belongs squarely in the line of exciting rock musicals.” And how. The musical is practically an encyclopedia of generational-angst signposts, from revolt against conformity to experimentation with sex and drugs to conflicts of conscience over a war and its aftermath. Baby Boomers who see American Idiot must leave feeling at least a little deflated at the musical’s demonstration that, 40 years after everything was supposed to have changed, everything’s exactly the damn same.

That’s not entirely true, though: now, the music is better. Classic 70s punk rock was an amped and accelerated version of Woody Guthrie’s major-key protest songs (filtered through the sardonic cool of Bob Dylan), and Green Day sensed correctly that W-era America was no time to mind the bollocks. Nothing in Hair, Rent, or Tommy jumps out of the speakers like American Idiot‘s anthemic title song, with its braying chorus: “Everything’s not meant to be okaaaaaaaay!” The original 2004 album is a classic in its own right, but these songs are at home onstage even more than they were on disc or in concert.

Part of the challenge in adapting American Idiot for the stage was supplying it with a servicable story line, but director/co-writer Michael Mayer (best known for his hit musical Spring Awakening) and Green Day’s Billie Joe Armstrong have wisely gone easy on the plot. Beat-like spoken-word interludes by central character Johnny (Van Hughes) give us just enough context to understand who’s singing what and why, but American Idiot is more a showcase for ideas and feelings than a conventional A-to-B tale. Its conclusion is brutally anticlimactic, so much so that a woman sitting behind me on Tuesday night gasped when she realized that was it.

American Idiot is probably the hardest-rocking Broadway musical you’ve ever seen, but it’s still a Broadway musical, so at least a few moments of awkwardness are unavoidable: what I think of as “the heroin/thong dance” between Johnny and his girlfriend Whatsername (Gabrielle McClinton, and yes, that’s actually the character’s name) comes to mind. But overall, it’s a lean and forceful show: the decision to present the musical without padding or intermission was wise, as the power of the music and the effective staging—in front of Christine Jones’s wall of TVs—keeps the show’s momentum hurtling forward.

“That was the best theater I’ve ever seen,” said my 31-year-old sister when the lights came up. “It actually had songs I could relate to.” As far as I know, Julia’s never been accidentally pregnant or gone to war or shot heroin with a bad-influence boyfriend, but the songs are familiar for a reason, and the ones that aren’t feel as though they should be.

The show closes with a group rendition of Green Day’s “Good Riddance (Time of Your Life),” which kept the Tuesday night crowd on its feet and doubtless had many in tears. Sweetening the musical’s pot with an acoustic heartbreaker borrowed from an earlier album would seem to be a cheap trick, but it works because the song’s bitter, wistful lyrics (the song has that title for a reason) are so in keeping with the musical’s disenchanted yet hopeful themes. We don’t believe in magic, we don’t believe in Jesus, we don’t believe in kings…but maybe we can still believe in Yoko. Or, at least, follow her on Twitter.