Dr. Bee Her Vang, PharmD, MD opened Alliance Pharmacy about two months ago, where the physician-pharmacist is taking on plenty of new clients offering a personalized alternative to the big pharmacy.

Alliance Pharmacy is the newest addition to the St. Paul Family Medical Clinic building at 1239 Payne Avenue, St. Paul. The founding physician remains Dr. Phua Xiong, M.D., and a host of new modalities have come on board including a chiropractor Everett Wells and the Massage Therapy Clinic.

Dr. Vang said it will be a challenge to compete with the larger commercial pharmacies in the area, and that his advantage is his own service as a full-time Hmong and Spanish speaking pharmacist-physician, along with Hmong speaking technicians.

The big pharmacies offer phone translation and Hmong speaking staff but he will translate medication labels into Hmong or Spanish. He hopes to share the big demand for customers with just one other Hmong owned pharmacy in the Sunrise Building at 995 University Avenue, St. Paul.

Hmoob Pharmacy recently closed when the CVS opened on Maryland.

Alliance Pharmacy does not carry the inventory of the competition but Vang said he knows what to have on hand, and works with providers to ensure low cost alternatives. He said the elderly want to be sure that Medicaire will cover the cost of their prescriptions. He said the pharmacy role is to offer alternatives for them to take back to their doctor – or call them him self.

“The costs of competition are not difficult because we only order what we need,” he said. “They are bigger but we don’t have a big front-end.”

The younger generation is modern but he said there are still barriers to understanding and using medications, said Vang. Just as the mainstream, people still tend to take their medications as they see fit rather than according to the directions. When their condition worsens they go to Emergency Room.

The pharmacy has been open for just a couple of months and Vang said he is getting calls from Hmong clients and is transferring an average 30 to 50 prescriptions some days from profiles held at other pharmacies in addition to the new clients.

Vang said his future outreach would include the “Give Back” discounts based on the Target model. Patrons may direct a charitable portion of their purchase to the church or charity of their choice.

Vang was just a boy when his family moved to Minnesota as refugees in 1979. They would moved on to Stockton, California in 1982, where he was raised and graduated from UC Riverside in 1993.

After completing medical school in the Caribbean in 1999, Vang said he wanted to apply his medical knowledge toward pharmacy and studied for three years at the University of Southern Nevada in Las Vegas.

As a pharmacy student Vang worked for CVS and continued with them after graduation. He lived in Las Vegas from 2004 through 2011 when he returned to St. Paul with the idea of opening a Hmong speaking pharmacy.

“I came back want to see if I could serve the Hmong community and help a little bit,” said Vang.

Everett Wells, D.C. has twelve years experience as a chiropractor and has worked almost exclusively with a clinic that served the Hmong community. When he went out on his own, the Hmong clientele followed. 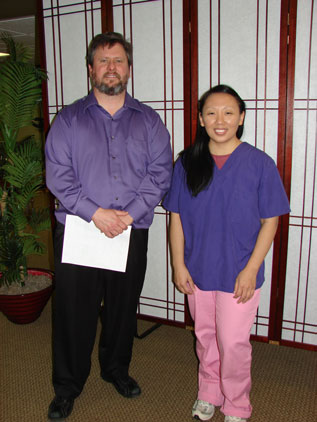 He said the specialty fields of chiropractic include injury and family practice, preventative and structural corrections and pediatric. They each have their own types of treatment and rehabilitation.

The chiropractic clinic is about working in unison with physicians and teaching patients a health perspective that discourages delayed treatment. He said people often discover that chronic pain may be symptoms of diabetes, kidney disease, cancers or other conditions that could do less damage with early detection.

Most of his musculoskeletal work comes from automobile accidents and domestic incidents such as hurting the back while doing yard work or gardening. Patients often need to be reminded to stay with a regimen of therapy, he said.

Tasha Lauj, officer manager, has worked with Dr. Wells for six years. She said a car accident resulted in her own continued therapy and that it has kept the recurring pain in check.

The St. Paul native lived for a time in Hickory, North Carolina, where she worked as an ESL teacher for the Hmong community. Her work expanded into health and education seminars on life skills training. When the jobs there dried up so did the new Hmong and she returned to Minnesota and began working for Dr. Wells.

She said her work begins with making people feel comfortable about chiropractic care.

“My grandfather said ‘you have to make way for friendship first before you can bond with someone’,” she said. “The Hmong love each other and take care of their own. That is the groundwork to work with patients professionally.”

St. Paul Family Medical Center was established in 2008 as the private practice of Dr. Phua Xiong, and it was here that she established “Quik Urgent Care Clinic,” the first Asian American-privately owned and operated urgent care facility.

Dr. Xiong came was a Hmong refugee as a child who went on graduate from Philadelphia Masterman Laboratory and Demonstration High School with honors in 1987. She received her undergraduate degree from Haverford College Pennsylvania and then her Medical Doctorate from the University of Minnesota Medical School in 1996.

Dr. Xiong received the U of M’s Resident of the Year Award and went on to practice at Model Cities Health Center before opening the first St. Paul Family Medical Center on University Avenue.