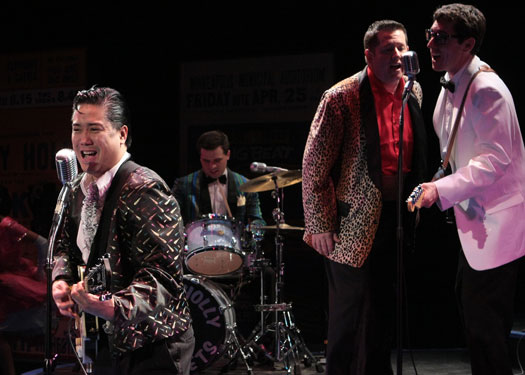 Local Filipino American actor Allen Malicsi has the role of Ritchie Valens in the encore production of Buddy – The Buddy Holly Story at the History Theater.

McNally Smith College of Music is co-producing the musical show with History Theatre and calls it part biography and part rock ‘n’ roll concert. The first production played to sold-out houses in 2009.

The Buddy Holly Story follows the rock ‘n’ roll singer from his early days with the Crickets in their home town of Lubbock, Texas, focusing on their stubborn refusal to give into pressure to not play the new music form. When Holly does get a recording contract he resists pressures to change his music or his looks.

The play has plenty of 1950s regalia for dancers to display the innocence, humor and charm that epitomized the emergence of rock ‘n’ roll into the American mainstream during the 1950s. Holly’s songs “Peggy Sue,” “Oh Boy!” “Rave On,” “That’ll Be the Day,” and others provide the soundtrack to a special time and place.

The issue of race was an impediment to rock ‘n’ roll and Buddy Holly’s appearance at the Apollo Theater in Harlem is portrayed in grand fashion in the play, with Lynnea Monique Doublette and Munyaradzi Tirivepi appearing as headliners that both give legitimacy to Holly as a barrier breaker and showcase the blues and jazz influence on rock ‘n’ roll.

Holly became a rock ‘n’ roll icon with countless hits recorded in less that two years leading up to the Winter Dance Party Tour with Ritchie Valens, The Big Bopper and Dion & The Belmonts.

Malicsi’s resemblance to the late Richie Valens (Ricardo Esteban Valenzuela Reyes) may have been a significant factor in his landing the role but he is also a dancer and singer, athlete and musician. These are important to a role that takes place in many of the final scenes when he sings the timeless “La Bamba” with Holly and the Big Bopper as back up.

“To me, playing Ritchie Valens is one of the most meaningful roles I have ever had the chance to play,” said Malicsi. “I grew up listening to the music of the 50′s and 60′s and always wanted to be a rock and roll star as a kid. In fact the first rock song I ever learned was La Bamba. So to be able to help tell the Buddy Holly story is such a tremendous honor for me.”

Valens (May 13, 1941 – Feb. 3, 1959) was a Mexican-American singer and musician who was already the forefather of the Latino rock and roll sound before he turned eighteen years-old. Much like Buddy Holly, by the time of his untimely death, Valens had put together a series of successful rock recordings in a short time.

The Winter Dance Party Tour started on January 23, 1959 in Wisconsin with stops at Milwaukee and Kenosha. They drove to Mankato, then back to Eau Claire, and back to Montevideo before making the January 28th stop in St. Paul at The Prom Ballroom on University Avenue on January 28, 1959. The Prom Ballroom was a major venue that opened in 1941 and closed in 1987. It was torn down and Bally’s Fitness later built on the spot.

From St. Paul the tour went to Davenport and Ft. Dodge, Iowa, and then back to Minnesota to Duluth, then over to Green Bay and then on to Clear Lake, Iowa for the fateful last concert on February 2, 1959 – “the day the music died.”

Holly and Big Bopper arranged for a small plane to fly them to Moorehead, Minnesota, to avoid the long bus ride in a snow storm. Valens ‘wins’ a fateful coin toss with one of Holly’s road crew to get the seat on the plane that would take his life.

The three took off with a local pilot and the plane struck a fence and crashed in the storm, claiming all four of their lives.

This History Theatre production is directed by Ron Peluso and Jan Puffer, with musical direction by Gary Rue and choreography by Jan Puffer. It is based on the Alan Janes play and original London production directed by Rob Bettinson.