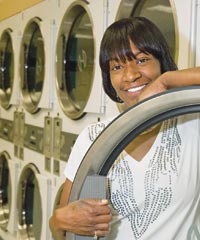 "A support system helps you stay connected to hold onto your dream and work with it." - Shantae Holmes (Photo by Paula Keller)

Balancing her 14-month-old daughter on her knee while she visits with customers, Shantae Holmes, 39, doesn’t have much time to reflect on how much she has accomplished in her life.

She perches on a stool in the light and cheerful atmosphere of All Washed Up, the laundromat she owns at 3008 Penn Ave. N. in Minneapolis. Becoming a business owner was a dream that Holmes has had since she was a child. But the dream lay dormant for a while, as Holmes spent time in incarceration.

Challenges to face
“I had the recidivism virus,” Holmes explained, “and I served two probationary periods of three years. I was in Shakopee, the workhouse and the county jail. I was involved in miscellaneous negative activities.”

But her dream resurfaced again. “I was tired of my lifestyle, and I wanted to challenge myself. I didn’t want a career as an inmate.”

Although Holmes is very personable, she chooses to be selective in sharing some of the problems she has encountered and overcome. “I much prefer to connect with women survivors from different disfunctionalities of life,” she said.

Support search
In Holmes’ senior year at Minneapolis Community & Technical College, she was applying for internships and getting turned down because of her ex-felon status. But she secured an internship with Amicus, an organization that helps ex-offenders transition to the community. Upon graduation with an associate’s degree in human services, she worked with the agency full time and then worked for Family Partnership and its PRIDE program for women rebuilding their lives after leaving prostitution. And she began her journey toward business ownership.

“I knew I had the personality and drive within me,” Holmes related. “I started my search in this block. I have lived in this neighborhood 30 years, and I knew there was a need here for a laundromat.” She did the demographics-which were a confirmation of what she already knew-and worked with a neighborhood hardware store owner as her mentor.

With the help of community agencies, including the Northside Economic Opportunity Agency that served as a catalyst to the project in partnership with Minneapolis Consortium of Community Developers, the Neighborhood Development Council and the City of Minneapolis, Holmes was able to follow the process and get the loans for her business.

The most challenging part of her quest was getting turned down by lenders for financing, but she persisted. Four institutions with mission statements indicating they helped small business owners turned her down.

“I knew going into it that it was going to be a difficult process for an ex-felon with no collateral to get a loan,” she stated. “But once I got into it so deep, that perseverance popped up. I was not going to end this process with a no.”

Staying grounded
Holmes said her work with the women in PRIDE also encouraged her.

“I have an expectation for them to further their lives,” she said. “How can I ask them to reach for higher goals if I don’t?”

She shared bits and pieces with them as she struggled, coming in to work and telling them, “I was turned down again today, you guys.” “I remember telling my supervisor one day after another loan rejection that I was giving up, I was quitting the process at exactly 6:39 p.m. that day,” Holmes recalled.

“She kept me grounded, not only helping me but convincing the women in the program that change is possible. A support system helps you stay connected to hold onto your dream and work with it.”

It took three years to achieve her goal, but today Holmes can look at her business with pride. Her laundromat offers not only 44 washers and dryers, a drop-off for dry-cleaning, a wash-dry-fold service, seamstress services and Wi-Fi, but a community resource bulletin board and a place where customers can feel safe and comfortable.

“I wanted a business that would allow me to still be a mother [she also has two sons, ages 9 and 6], but also the opportunity to develop a conversation with people,” Holmes said. She continues working with PRIDE part time while she runs the laundromat with the help of family members and other paid staff.

“It hasn’t been easy,” she said. “So many days were overwhelming and challenging.”

Holmes said she sometimes looks back and says, “This is what you asked for.” She said she then takes a deep breath and tells herself “This will get easier.”

“I am elated I was chosen to do this,” Holmes said. “I praise God first, and then the agencies who helped.”