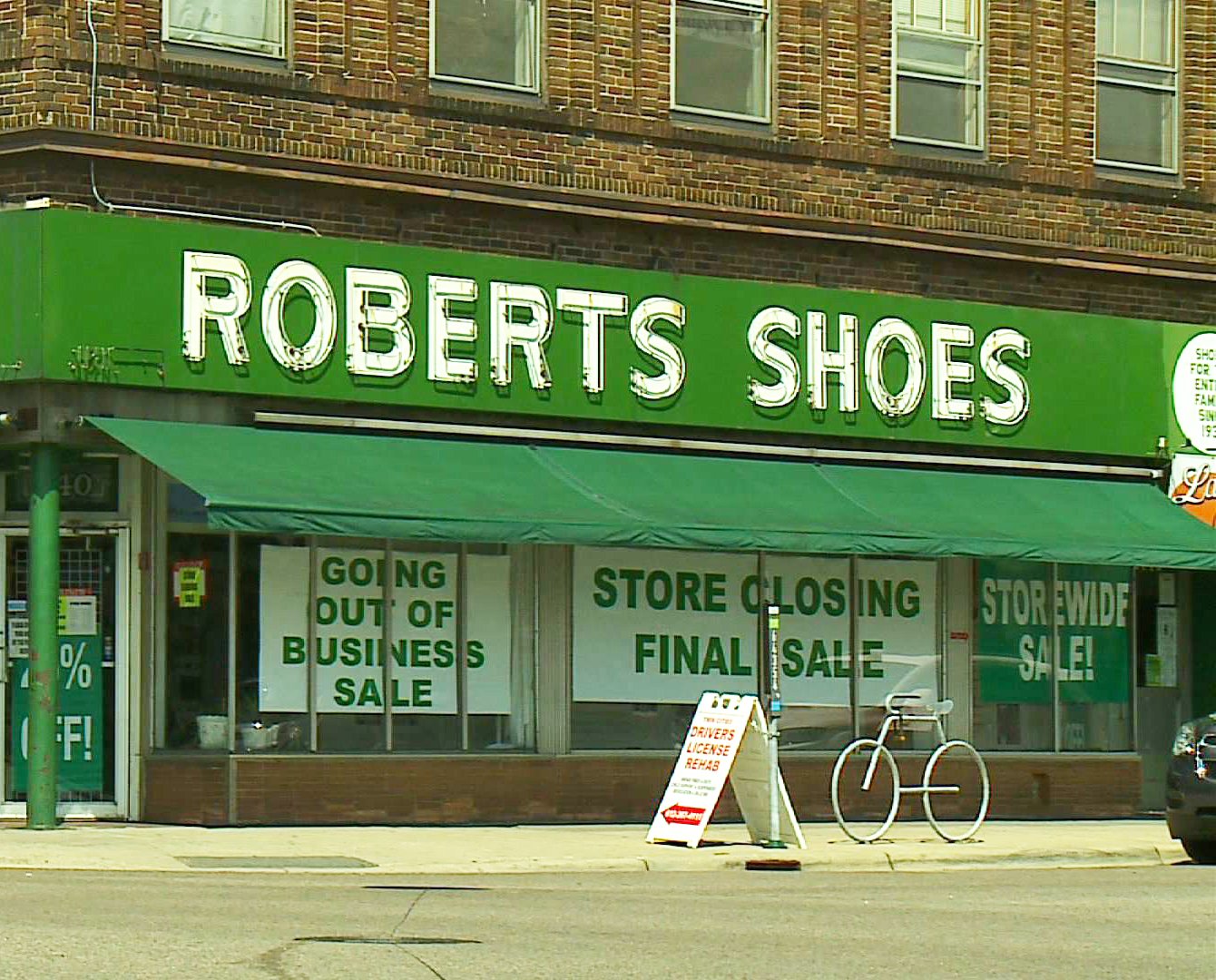 Any time you see a Going Out of Business Sale sign, you know some lives are changing, as an institution is coming to its end. But what if that business has been in the same location, in the same family, and with only two owners, since 1937? That’s the story at the corner of Chicago and Lake, where the familiar green signs “Roberts Shoes” and “Hardly A Foot We Can’t Fit” are now eclipsed by huge going-out-of-business sale signs. That’s the main story, but there are scores of other stories, too.

The stories about people: Nathan Roberts was the original owner. In 1937 he was an employee at Kaplans, when it was on Franklin Avenue. A chain store called Minneapolis Shoe Company was going bankrupt, and Roberts had the idea to buy one of their stores, at the corner of Chicago and Lake. The Sears department store and warehouse had just gone in a few years earlier, and two streetcars passed by the corner, so he figured it would be a good location. He was obviously right! Roberts worked in the store until his death in the late 1990s at age 89. There are a few old-timers still working there who sold shoes with Roberts years before Mark Simon, the current owner. At 62, Simon says he is one of the younger members of staff. Several are well past retirement age, but apparently shoe salesmen never want to retire. Or maybe they were just inspired by Roberts’ example.

In 1982, Nate Roberts recruited his son-in-law Mark Simon to work in the store, with the view to taking it over. Simon found he liked retail sales as much as his father-in-law, so he stayed on and then he and his wife bought the business in 2000. Simon is the owner of both of the business he is closing down and the building that will remain. He is also a commercial realtor and will continue in that business, seeking a new tenant for the Roberts Shoes space after the business closes.

The story about the neighborhood: The Sears store was struggling at the end of the ’80s, and closed in 1994, leaving a derelict building on a corner where blight and crime were coming in fast. Simon was and remains a very involved business owner, attending community and Lake Street Council meetings, and steering the neighborhood into more prosperous times. This activism paid off in a major way when the Sears building was converted to the Midtown Global Market and Allina Health complex in 2004. Roberts Shoes had a good rebound in business at first, but this was followed by recession in 2008.

The story about the business models: Roberts Shoes had a really good business model to start with. They are still known for hard-to-fit sizes, and these are the customers most distressed at their closing. Through the years, changes in the retail environment challenged both Roberts and Simon, who reacted to each of them with a plan. Roberts Shoes, at Simon’s urging when Nate Roberts was still the owner, branched into athletic shoes just in time. Simon was an early adopter of the tactic of having a “web presence.” More recently, they added a line of athletic clothing. Roberts has seen many other independent shoe stores fall victim to mall-based chains and internet sales, and each one has meant a small uptick in their own business. But in the end, the tide is turning, and Simon is closing now when, as he said in an interview with the Star-Tribune, he can do it on his own terms, not under pressure from anybody.

I talked to Mark Simon in the store and asked him to tell me the best stories. One, the Tornado Story, happened in 1981, the year before he started working there. The tornado tore through the Twin Cities on a Sunday in June, from west to east. At Roberts Shoes, the windows were all blown out, and the roof was taken off of the building. The inventory was scattered; there were even tales of Roberts’ shoes landing in St. Paul! But the store opened for business the next morning, out on the sidewalk, selling shoes. The other great story may be apocryphal; I can’t confirm it, but it’s a great story. According to Simon, Robert Pirsig penned his best-known work, “Zen and the Art of Motorcycle Maintenance,” in a studio above Roberts Shoes that he was subletting from a small publisher. I really hope that’s true.

According to Minneapolis licensing rules, the store has 90 days to hold its closing sale. They can apply for an extension, but best be safe and don’t put it off too long. Get yourself some shoes for a bargain, and a piece of history for free.