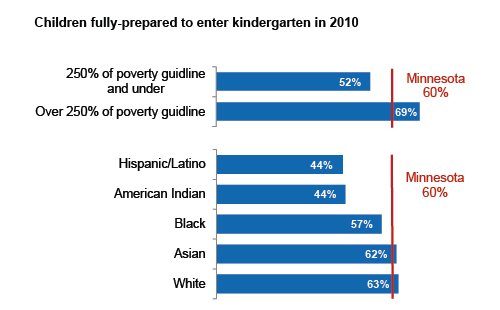 Our infants, toddlers, and preschoolers have the distinction of being the most racially and ethnically diverse Minnesotans. Children of color now make up about 30 percent of the 420,000 children under age 6.

Something is fundamentally wrong, however, because our youngest children are also the poorest Minnesotans. Nearly one in five children under age 6 lives in poverty, and 61 percent of children under age 6 living in poverty are children of color. They also suffer disparity after disparity in indicators of educational, health, and social well-being, which place their own and our state’s future prosperity at risk.

A new School Readiness Report Card prepared by Wilder Research for the Minnesota Office of Early Learning shows the systemic challenges that begin before birth:

Mothers of color report higher rates of depression. A mother’s mental health can impact her baby’s brain development and the healthy attachment between parent and child, which can affect the child’s physical and mental health and ability to learn. About 12 percent of babies have mothers with a history of depression. In 2010, African-American (18 percent) and American Indian (28 percent) mothers had significantly higher rates of reported depression prior to pregnancy.

Children of color have higher rates of out-of-home placement. In 2011, about 3,000 children under age 6 were in out-of-home placement or foster care, with large disparities for American Indian and black children. Often this is a result of reported abuse and neglect, which is also highest among American Indian and black children.

Children from lower-income families, Latino children, and American Indian children have the lowest rates of kindergarten readiness. In 2010, 60 percent of Minnesota’s kindergartners demonstrated readiness for school. While the percentage is higher than in the three prior years, when 52 to 54 percent reached overall proficiency, it is important to note that only about half of low-income children under age 6 are ready.

This first School Readiness Report Card provides the opportunity to advance our conversations and actions, progressing from documenting the disparities in access to resources and well-being among children under age 6 to understanding these differences as avoidable and unjust.

Achieving the goal that all children are ready for kindergarten by the year 2020 requires targeted investments in multi-generational, comprehensive, and flexible services for early learning, health, and family support and greater economic development among Minnesota’s diverse communities. It also requires valuing diversity and equity for all children, families, and communities and eliminating systemic and structural inequities based on race and racism. Equity and inclusion must be integral to our actions and to how we define and measure service access, family and community engagement, program quality, and early childhood outcomes.

Unless we address these concerns now, the inequities will grow, and kindergarten readiness efforts will likely fail.

This first School Readiness Report Card was developed to monitor the state’s progress toward the goal that all children are ready for kindergarten by the year 2020. It consists of six fact sheets that include indicators of progress for both systems and child outcomes. Together they provide a comprehensive picture of Minnesota children under age 6. Trends are examined in the early childhood population, early care and education, health and development, and family support.