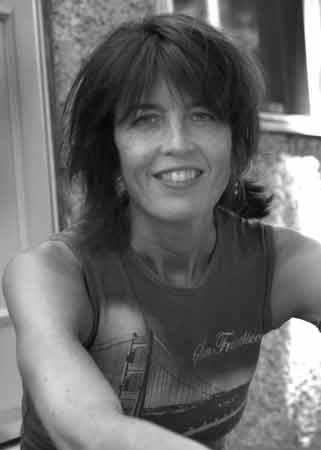 This spring, Alison McGhee won her fourth Minnesota Book Award for her novel All Rivers Flow to the Sea. It won in the Young Adult Fiction category and concerns how 17-year-old Rose flounders to find purpose in her life after her sister is rendered comatose by a car accident. The award was granted at an awards ceremony held at the Women’s Club of Minneapolis that was hosted by Cathy Wurzer of Minnesota Public Radio and Television.

Alison has lived in Uptown since 1986, and now lives with three children, a poodle and a nervous cat. She grew up in the northern part of the Adirondack Mountains on a non-working farm with her father (who worked for a dairy-farm cooperative), mother and three siblings. She has a cabin in Vermont and visits her parents, who still live on the farm. The place she grew up and her family life are often reflected in her books. She went to Middlebury College in Vermont and next lived in Boston typing papers for college students while developing as a writer.

Alison’s novels previously won the Minnesota Book Award with Rainlight in 1999 and Shadow Baby in 2001. She won in the Children’s Picture Book category in 2003 with Countdown to Kindergarten. She was also a finalist for the award with her second children’s picture book Mrs. Watson Wants Your Teeth and with her young adult novel Snap. These and other publications have won many other awards as well, including Shadow Baby being nominated for the Pulitzer Prize. She has published dozens of short stories, poems, essays and book reviews. One can read one of her short stories, Joseph is Falling, on The Rake magazine website in the August 2005 archive.

McGhee has written her next novel, Falling Boy, which is set in Uptown. It is a story about a 17-year-old boy who is a paraplegic and confined to a wheelchair. It will be released next March and the theme is similar to her previous novels, in which a young person copes with tragedy. Alison has a very poetic style, often returning to the same thought like a refrain in a song. Each time she does, another aspect of the central event is revealed to the reader. She would like to write a comedy, however, and her books do contain many humorous asides, especially in Shadow Baby.

McGhee loves Uptown for being such a great walking neighborhood and having proximity to shopping and nature. She also likes the mix of people but is afraid that the rising real estate values will reduce the diversity. She is also afraid that development will kill the character of the neighborhood.

She is a professor at Metropolitan State University, working half-time as the coordinator of the creative writing program. She teaches introduction to creative writing (fiction, poetry and memoirs) as well as advanced classes. She has taught at a number of colleges, such as Carleton, and likes the diversity of the students at Metro State. They have an average age of 33, are usually working with families, and often are the first persons in their families to go to college. They often go on to writing careers but mostly want to write for personal enrichment. McGhee also teaches in Vermont College’s MFA program in writing for children and young adults.

McGhee is a self-disciplined person, as her athletic physique, very busy life and voluminous accomplishments testify. She advises that the successful writer is one who shows up at her station each day. She has a sign in her office that says, “Write a little every day, without hope and without despair.” She used to have one that said, “A diamond is a piece of coal that stuck with the job.” She says that to be good at anything you have to just keep plugging away at it. Her motivation is that she wants to write beautiful books but they are never quite what she wanted, so she keeps at it. She credits her mother for being her example of having self-discipline. She also doesn’t like a lot of labeling of persons or the setting up of false categories.

She says that writers need to love words and must be avid readers themselves. They need to love to put the words together to achieve the best order and that great writing has both insight and good construction. She feels that an artist reveals to the reader what he already knows but can then see in a different way or with greater clarity –– the perspective has been pivoted.

McGhee has concerns for the country and world, and feels that we are in a crisis but that change provides opportunity for improvement. She feels that those people wanting power have been at it for many years and that only now are others waking up to it. She feels that we used to have at least semi-active political parties but that they were lulled to sleep with apparent comfort.

We will all be waiting for the new novel set in Uptown to come out and see if we recognize anyone in it. Perhaps we will eventually have a movie set in Uptown directed by Altman and starring McGhee and her cast of many characters.