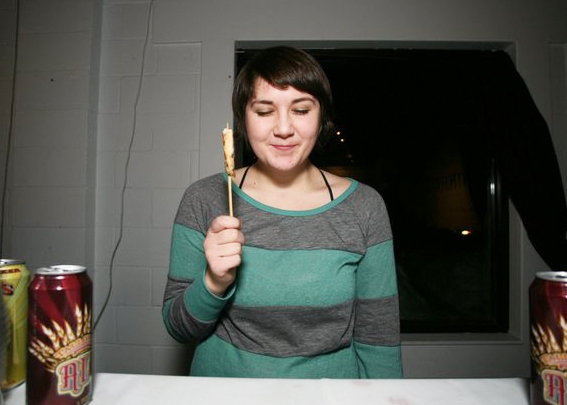 What’s your job?
“Driving the Paratransit van for the U of M—which means I drive injured athletes and old people to their classes/work.”

Other than your job, what are your claims to fame?
“I’m Meatpit. I like to think that has the same effect as saying ‘I’m Chuck Bass.’ I just go out a lot. I would like to be known for highbrow poop jokes or my amazing ability to turn my arm into a prehensile dolphin penis when I drink, but my fake Facebook ads for ‘asshole pussy tattoos’ will do, I guess.”

What’s your relationship status?
“The .5 boyfriend has recently been promoted to 1.0, but no one can tame this wild stallion.”

Where are you most likely to be seen?
“I go out every night, but I’m afraid of crowds, so I’m usually sitting in a corner at the bar trying to get some air. Tuesdays i hang out on the old bar side of Triple Rock, thursdays I’m at Jäger, those don’t change much. Other nights you can find me at Neddies, CC Club, Turf, or First Ave.”

Where are you most likely not to be seen?
“The venue side at Triple Double, Too Much Love, the Library. Anywhere I run the chance of being the oldest one there (I’m 22). I kinda stopped going to the ‘secret’ venues too—it has to do with the ‘need for air’ thing.”

With what person or people are you most likely to be seen?
“I’m usually in the vicinity of Mark McGee, Emily Angelo, or 1.0, but I’m kind of a compulsive mingler. So go to the places listed above, and I’ll probably be talking to someone you know.”

Where were you born?
“A farm in Ham Lake, Minnesota.”

What neighborhood do you live in now?
“North Minneapolis, but like, a nice part.”

What’s your ride?
“My Pontiac Grand Am is a memento from my suburban past.”

What’s the best way for someone to start a conversation with you?
“Just pretend you know me. I’ll spend the entire time quietly trying to figure out how I know you and will feel too guilty to excuse myself.”