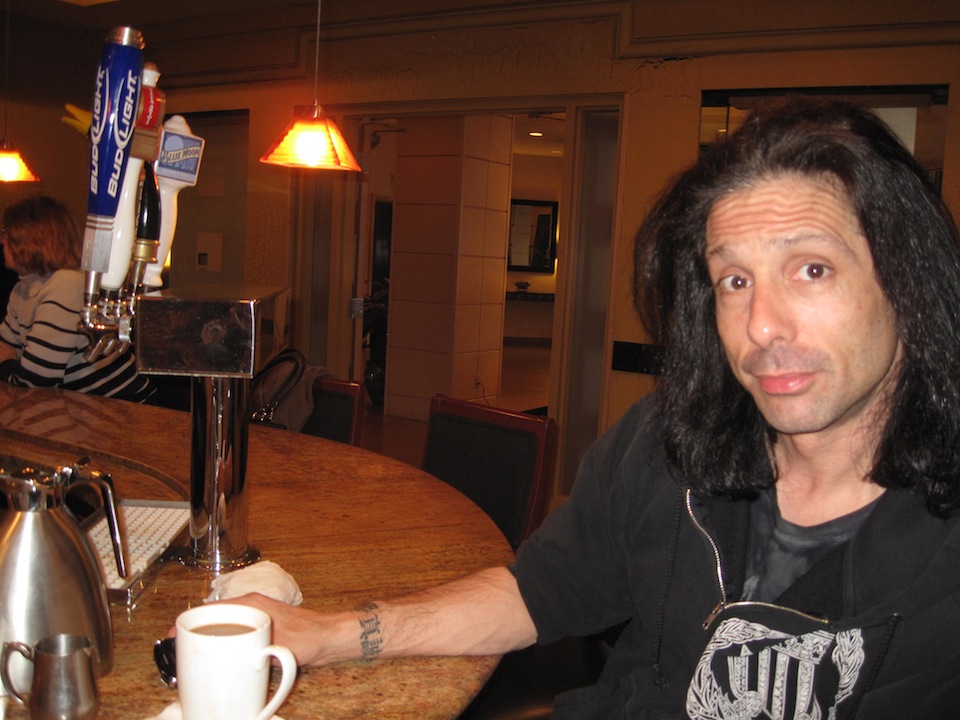 Just in case you were wondering, the Trans-Siberian Orchestra are not actually from Russia. That’s one of the first things Al Pitrelli, music director and lead guitarist for TSO, told me when we met up at the Mall of America Hilton for an interview this week. He looked a bit tired—he had been giving interviews all day and was ready to take a nap.

“Can I buy you a coffee, sweetie?” he asked in his thick Long Island accent as we were walking into the hotel café. “Or maybe a Martini?”

He asked me what I wanted to know, and I told him it would be great if he told me something different than what he’d told all the other reporters that day. “You know, they ask me a blanket question,” he said, “on the radio, on TV. I’m going to give a 15 second answer; it goes by pretty quick.” He took a sip of his coffee and looked around the café. “You ask me the same question in this kind of setting we’ll be here a while, so it’s kind of up to you. Take me where you want to go.”

TSO have been around since 1996, when producer and songwriter Paul O’Neill brought together Jon Oliva, Al Pitrelli, and Robert Kinkel to produce music that incorporated orchestral elements with hard rock and heavy metal. The band is named after the Trans-Siberian Railway. Pitrelli said that in the times he’s flown over Siberia when he’s on tour, the view is just white the whole time.  “It brings up images of you know, wintery stuff,” he said.

Before the band formed, a number of the members who were in a band called Savatage created a record called Dead Winter Dead, which contained the surprise hit “Christmas Eve (Sarajevo 12/24).”

“We sold a lot of records but a lot of the people that were not typical heavy metal fans were a little taken aback,” Pitrelli explained. “So Paul came up with this thing—’How ’bout the Trans-Siberian Orchestra?’ I was like, ‘Sounds Christmasy! Sounds like snow and reindeer to me!'”

Over the past 15 years, the TSO have produced a number of enormously successful rock operas, many with Christmas themes. The group will be playing at the Xcel Energy Center on December 27.

I asked Pitrelli to explain a bit about his background, and how it came to be that he’s fluent in orchestral music as well as rock and roll.

“Let’s go back a long time,” he said. “I’m 48 years old. So that means when I grew up my first introduction to music was listening to Ed Sullivan in 1964. So how old are you?”

“Okay, so you’re a little bit younger than me. Well, you’re a lot younger than me. I know it’s inappropriate to ask a woman that, but for professional reasons…you gotta understand that when you were two years old, so that’s 1980, okay, MTV was born. When I was two years old, you had three or four TV stations on your home TV, and one radio station.”

Pitrelli explained that when he was two years old, he saw the Beatles on the Ed Sullivan show and it changed his life. While he was growing up, there were few options for Pitrelli on the radio.  There was only one station, and on that station he listened to Gladys Knight, or Frank Sinatra, or maybe the soundtrack from South Pacific. “You were basically going to listen to whatever they put at you,” he said.

There were also two kinds of people in school, he said: those who played basketball and football, and those who joined band. Pitrelli joined band, where he played trumpet. He also played guitar, but not in the school program. The guitar “wasn’t recognized as a serious instrument back then,” Pitrelli said, “so there was no curriculum in the school.” So what did he do? Started a band, of course, emulating the popular music of the mid-70s: Skynyrd, Zeppelin, KISS, Aerosmith, and the like.

“What was your band’s name?” I asked.

“The Jake Lezley band,” he said.  “And the reason for that is because Lynyrd Skynyrd named their band after a gym teacher in high school named Leonard Skinner, so we decided to name our band after a math teacher who hated rock and roll.” They started writing songs, songs with horn sections like the Doobie Brothers had. Eventually Pitrelli took a few semesters of college, but decided it wasn’t for him. So he came back to New York City and began his professional music career “the old-fashioned way,” by hitting the streets.

Pitrelli spent his time in New York teaching guitar lessons, playing for different bands, scrapping together a living as best he could. Meanwhile, he was reading the record labels of his favorite musicians like the yellow pages, contacting record labels, managers, and musicans. In 1985, he found out that Michael Bolton’s band members were all moving on, so he got his friends to learn all the songs and managed to get an audition with Bolton’s manager, whose assistant was Paul O’Neill.

“We vowed we would work together one day,” Petrelli said. “You pass over 10 years later from that chance meeting, because this idiot kid from Long Island—you see, that’s how my life has been. 48 years has been a series of accidents and turns that have just led me to be in this seat sitting next to you having a cup of coffee in this lovely hotel today. I couldn’t have scripted it, I couldn’t have told you what I did, I just know that with a guitar in my hands I kind of have a focus on at least what I consider a musical integrity. In chance meetings with certain people, of course, my life is what it is.”

In 1989 Pitrelli got a phone call from a friend saying that Alice Cooper needed a musical director.  Pitrelli asked him, “What’s a musical director?” and his friend said, “It’s a little Italian with the biggest mouth.” To which Pitrelli replied, “That’s me. I can do that.”

From there, he worked with different bands over the years, a varied list that includes everyone from Celine Dion to Megadeth (a stint which, he said, taught him how to deal with Satan).

After all that, Pitrelli found himself in the mid-90s talking with Paul O’Neill about a band that would blend heavy metal and orchestral music.

In 1996 the band members joined O’Neill around his kitchen table in New York City. He’d play a Christmas carol or orchestral theme and ask the band members, “What do you guys got?”

“We were kinda hanging out, you know, like chain-smoking, sneaking whiskey out of a pint bottle under the table,” Pitrelli said.

O’Neill would play a Tchaikovsky theme, and Pitrelli would riff on it. That’s what they did for several months, tapping into their individual backgrounds and throwing things on the table. The group’s 1996 debut, Christmas Eve and Other Stories, was an immediate hit, and have become so popular a live attraction during the holiday season that there are now two entirely separate groups that simultaneously tour as the Trans-Siberian Orchestra. By Billboard‘s accounting, between 2000 and 2009 the TSO amassed over $200 million in sales of over five million tickets, making them one of the decade’s top 25 touring music acts.

“So are you a religious person?” I asked Pitrelli.

“Not really,” he said, but “I always wear a crucifix just in case I’m wrong. I grew up Catholic. You know, regular Italian Catholic. I don’t know if I’m totally religious as far as organized religion goes, but certainly I have a strong sense of right and wrong.”

“So is the Christmas theme a conflict for you?” I asked.

“I believe in the good,” he said. “I believe in the literal celebration of what the day is for—you know, the birth of Jesus Christ. I also think the idea of the holiday representing something special—that it could actually change something—makes this much of a difference in the world. It’s like a ripple effect on a pond or a lake. Good and bad is good and bad.”

After traveling for so many years, Pitrelli has interacted with a number of different cultures. “Everybody thinks their God is the God. If you’re a Christian, if you’re a Muslim, if you’re a Buddhist. Somebody’s got to be wrong. I’m not much for the hocus-pocus part of the religion. I’m a musician, which means I’m really good with mathematics. The common denominator is good. Be good. Be righteous. Be honorable. Don’t fuck anybody over.”

I asked Pitrelli whether he thought TSO’s music could change the world. He paused. “I didn’t start out that way and it would be more arrogant than I already am to say that, but I tell you what. It’s changed people’s lives, and they’ve told me about it.” Often, people tell Pitrelli that they’ve taken their kids to see a TSO concert, and the kids then want to learn to play guitar. He also likes looking into the audience and seeing generations of families enjoying something, and maybe helping the older folks realize that heavy metal isn’t horrible. “I just know people tell me things like that—we made a difference in their lives. Like the Beatles 46 years ago made a difference in my life, watching them on that Ed Sullivan thing.”

His favorite thing is to watch people’s expressions change when the band hits the stage, and he hits the first chord. He also loves looking at the people on stage with him: his friends that he’s cut his teeth with in the clubs of New York, getting hit over the head with a pool cue because they didn’t play “Freebird.” They make eye contact with each other, he said, and it’s one of the greatest feelings.