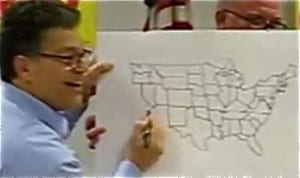 U.S. Sen. Al Franken does not belong to the International Independent Order of Odd Fellows (IOOF) — despite his listing among “Notable Odd Fellows” in the Wikipedia entry on the IOOF.

Anyway, that’s the claim of Franken spokesperson Jess McIntosh, who first told the Minnesota Independent that our query about Franken’s alleged IOOF membership would have to take a back seat to more pressing matters like national health care reform.

But when we told her about Walter Mondale’s frustration with Wiki-vandals who alleged the former Vice President kept roosters and sang opera, McIntosh promised to get back to us with an answer.

“That’s a no on IOOF,” came the message from McIntosh a couple hours later. “Sorry to disappoint.”

But our disappointment that Franken was not in fact a member of a 19th-century fraternal organization with a funny name was nothing compared to a let-down that happened last week.

A West Coast reader and former Minnesotan tipped off MnIndy that he’d received word from a friend at the Minnesota State Fair that the seed-art version of President Obama’s birth certificate was — as is so often claimed about the actual document — missing.

When State Fair authorities checked on the matter for MnIndy and found nothing untoward at the Crop Art exhibit, no blank spot where the birth certificate facsimile-in-seeds had been … now that was disappointing.