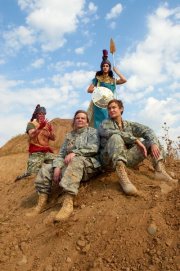 It makes a lot of sense to do an updated version of Sophocles’s Ajax in light of the Iraq War finally coming to an end and the U.S. seeing to the task of supporting veterans as they return home. The play is about the mythological character of Ajax, a war hero who, angry that Odysseus rather than Ajax was given Achilles’s armor, seeks revenge. But due to Athena messing with his mind, Ajax murders and tortures a bunch of animals, thinking they are his enemies, and then when he realizes the truth of his actions, kills himself on his own sword.

According to a study conducted by the Center for a New American Security Suicide Report, a veteran of Iraq and Afghanistan commits suicide every 80 minutes. The startling statistic just shows how enormous is the undertaking of caring for the mental health and wellbeing of soldiers past and present.

It really wouldn’t take much to simply stage a production of Sophocles’s text: the story itself, and the journey of its main character, has a lot of relevance today. A soldier, accustomed to life during wartime, finds himself unrewarded for his bravery, battling demons in his head, and facing shame from the civilians around him, and ultimately finds himself unable to face living.

But playwright Ellen McLaughlin takes it a step further. In Ajax in Iraq, she juxtaposes the Greek story with a modern retelling. The two stories—that of Ajax (Rich Remedios) and A.J. (Katie Guentzel), an Iraq war specialist near the end of her first tour of duty—alternate throughout the play with the addition of the character of Gertrude Bell (Frank regular Maria Asp) a British traveler, archaeologist and diplomat who helped shape the borders of contemporary Iraq.

In the contemporary version of the story, A.J.’s fellow soldiers notice that the once strong-willed and ferocious young woman has been withdrawn and moody, sleeping all the time and not being herself. McLaughlin weaves in the struggles of women soldiers (both through the plight of the main character and also in the voices of the chorus), and in particular highlights the issue of rape in the military.

The contemporary scenes are uber-realistic and brutal. Guentzel is striking in her role, and the chorus’s women do a great job—both in scene work and choral moments where they address the audience—of showing the struggles and thoughts of women soldiers.

But just a warning: this is not the kind of play for the faint of heart. There are some graphic scenes, and if you’re not the kind of person that can watch a pretty realistic rape depicted, then this might not be the play for you. Personally, I just closed my eyes for that part.

The play is fairly short—about 90 minutes—but it seems long, and I think it’s because the juxtaposition of the Greek and contemporary versions of the story was unnecessary. The contemporary version stands on its own: it’s enough to know that it’s loosely based on Sophocles’s Ajax without including those scenes. The Greek scenes aren’t engaging: the set is too cramped to let such a big text have the space it needs, and the actors don’t handle the transitioning between the two styles of theater very well; they are much better at the realism moments. The two actors that play solely Greek characters—Taous Khazem as Athena and Remedios as Ajax—don’t have the support to become their larger-than-life characters.

The other problem with the play is that it’s a bit preachy. I’m guessing the majority of Frank Theatre’s audiences pretty much agree with McLaughlin’s message. Political theater is a tricky thing. How would you get it seen by audiences that aren’t critical of the Iraq war, for instance? Still, it does offer some very relevant questions and issues, and with some fine performances it is a show worth seeing.