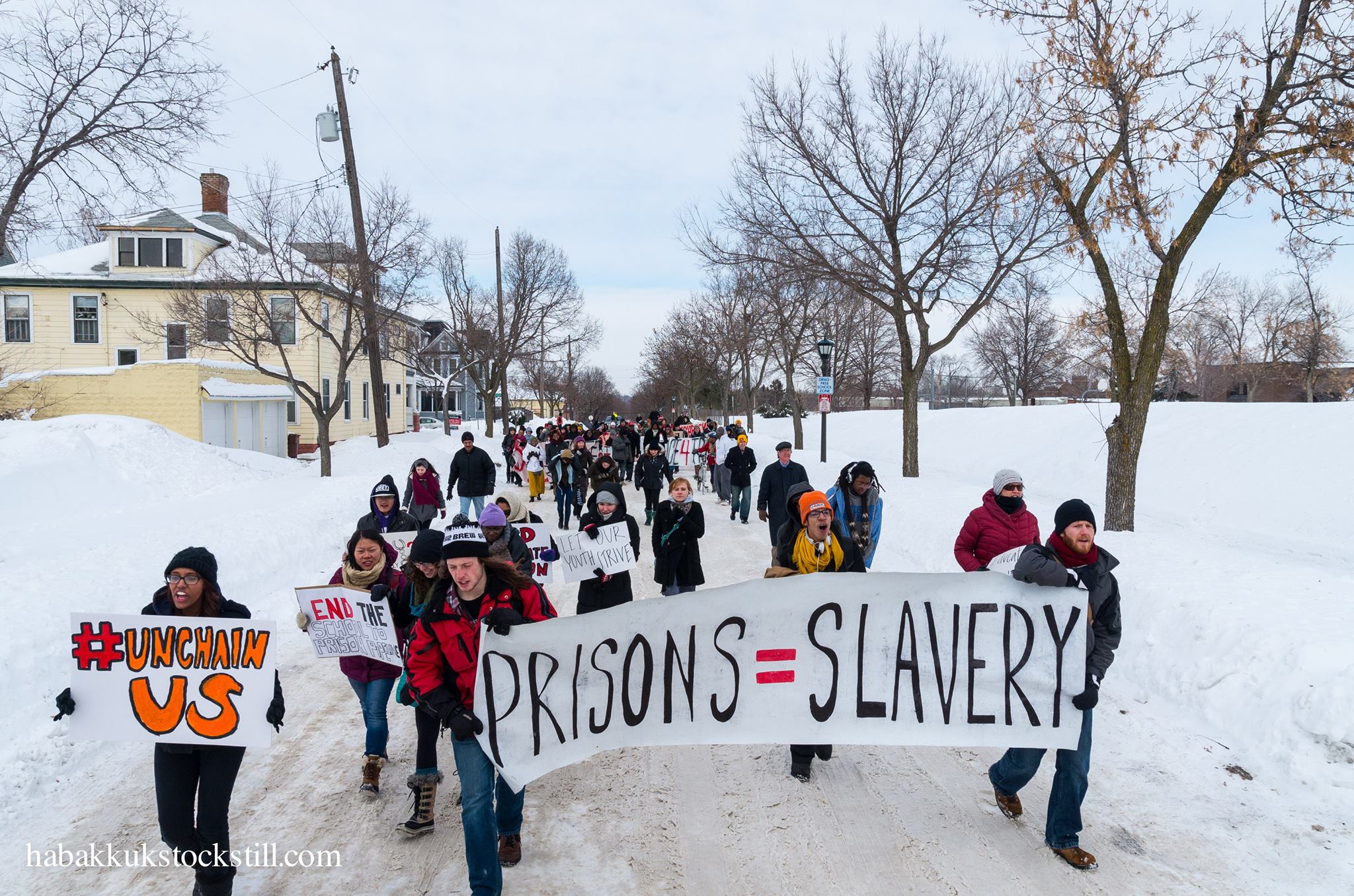 Here are people marching after the initial rally and walkout.

On Wednesday, February 26th, NAACP St. Paul Youth and Collegiate Branch and students from Central High School hosted a youth organized protest and walk out against the school to prison pipeline. This was a project that stems from student concerns about the mistreatment of low income youth and youth of color within the school system. The “Unchain Our Children” movement was birthed out of a desire to bring more awareness to the systematic complexities and harms of the school to prison pipeline.

The protest was a tremendous success and was an outstanding first step to the procession of this commendable campaign. Over the course of an hour and a half, more than 200 community members and organizers rounded up at Central High School in bone biting negative reaching weather. The sheer number of protesters who attended this event in the uncooperative weather exhibits the social exasperation and the political anxiety that community members have with the school to prison pipeline and their willingness to sacrifice their safety for the cause. People did not simply have a protest for the sake of a protest. They have legitimate concerns with the way that the youth are affected by institutional oppression and recognize the need to support this resistance movement.

The performative aspect of this resistance movement is essential to its exposure. The youth orchestrated a political production in order to heighten the visibility of the campaign. The first part of the performance was the assemblage of the protesters as they rallied in front of the school with signs and banners, crying out chants and screaming for liberation. The next section came the emergence of the students as they defiantly walked out of the school, even with the risk of suspension on their radar. After that came the taking of the streets; hundreds of individuals joined us as we marched our way around from Central High School to a safe sanctuary. The conclusion of the performance was the regathering of protesters at the St. Paul Lutheran Reformation Church to hear performances from local artists (Dem Atles, Lioness, Nick Mastermind Mohamed, Matt Carlyon, Desdamona, Anika Bowie, Sidiq Abdullah) and speeches from local activists who represent a variety of different groups (Nekima Levy Pounds, Anthony Nocella, Nick Mohamad, Marcus Harcus, Charles Gill, etc).

Unchain Our Children: Protesting the school-to-prison pipeline from SwayHeavy Productions on Vimeo.

This political performance acted as a spectacle and an entryway into the campaign and movement. People are now aware of the importance of the cause because of its conspicuity and its aesthetic appeal. The controversy and transience surrounding this project is key to opening up substantive dialogue about this issue.

It is important to also state that this was a movement that was dependant on the assistance of community members and of organization. The youth branch was not alone in its efforts in coordinating this event, nor in its efforts to stimulate change. Many other organizations and people within the Twin Cities contributed substantial amounts of help to the youth branch and provided them with the platforms needed to get the word out there. In order to stay in touch with all of these sponsors and people, NAACP has collected the information of hundreds of people and organizations that have been entered into the youth branch’s database. The information of these allies will assist in creating quick and effective political mobility.

NAACP St. Paul Youth and Collegiate Branch hopes to continue on with this project by assisting students with student lead protests, sitting with administrators and people in the public school system to work towards making changes for the better, pushing the school to prison pipeline higher up on local government’s agenda, and making this a more nationally recognized movement. This protest is not a one stop ordeal that will be forgotten in a short period of time. The youth branch has even taken large strides by making a subcommittee called “Unchain Our Children” that will be focusing exclusively on resisting the pipeline.The youth branch hopes to continue to make strides to create a better community and a better world for fellow youth. I end this peice with a quote from Nekima Levy Pounds that was extropolated from the video coverage of the event; “Let us unchain our children. Together”