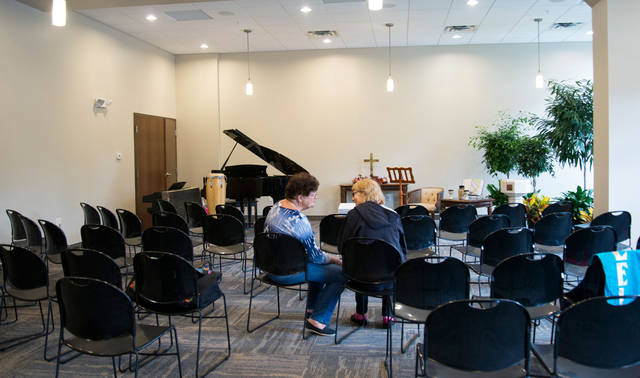 Associate in church growth Judy Maghakian speaks with pianist Elaine Klaassen on Saturday at Andrew Riverside Presbyterian Church. The church, rebuilt after a previous building collapse, is located in the first floor of The Elysian apartment complex. (Photo by Juliet Farmer)

The original building from 1880 was demolished in 2003 after a wall collapsed, and the church is now housed in the first level of a five story, 56-unit Elysian apartment complex.

In a letter to the congregation, church staff said they were excited to be in a building “full of bright, fresh young people.”

Judy Maghakian, associate director of church growth, said church staff want to welcome all members of the community as a non-traditional place of
worship.

“The people on the building committee wanted to put a cross out front,” she said. “I said no.”

The congregation focuses on diversity, globalization, collaboration, learning and welcoming students, Maghakian said. During its decade-long hiatus, the congregation gathered at the University YMCA and had an office in Dinkytown.

CPM Companies, which owns the Elysian, gave the church a free 99-year lease on the space in exchange for the land.

Katie Lindman, an Elysian resident and pre-mortuary science sophomore, said she didn’t know a church would be below the building when she moved in.

“I don’t know if they’ll enjoy living next to college students,” she said. “But it makes sense they’re there if they were here before.”

Judy Maghakian, wife of Pastor Harry Maghakian, said they invited their neighbors in the building to the first service on Sunday and that she’s thrilled the church finally has its own space again.

“We’re looking to grow with this new space,” Maghakian said. “We try to remove the barriers and make people feel welcome.”

A couple of students tried to use the church entrance to access the apartment building, but the church distinguishes its entrance with a stone from the old church on its lawn.

Andy Whitman, University of Minnesota finance professor and a member of the congregation since 1981, said the church has a unique history and connection with the University.

“There have been many students and faculty who go there,” Whitman said, “even our own president.”

Maghakian said University President Eric Kaler used to be a member of the congregation while pursuing his doctorate at the University.

“He was an engineer, so he used to talk about the walls deteriorating in the old building,” she said.

Elaine Klaassen, the church’s piano player, said Harry and Judy’s charisma is one of the main reasons she loves Andrew Riverside.

“They’re so nice and welcoming,” she said. “They’ll talk to anybody. They want to hear everyone’s story.”

Henri Mitambo, who graduated from the University in 2008, said the family aspect of the congregation is what keeps him coming back.

“Everybody knows everybody,” he said. “We all try to make each other feel welcome.”

Mitambo and church elder Michelle Parsneau both said they’re looking forward to the church returning to its original location.

“I’m excited for us to have our own place again,” Parsneau said. “This is a chance for us to engage with the community and have a presence.”