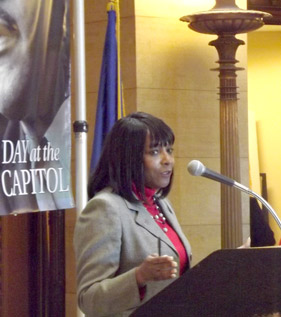 Rep. Rena Moran addresses attendees of the Council on Black Minnesotans' Day at the Capitol inside the Capitol rotunda. (Photo by Harry Colbert, Jr.)

African-Americans from throughout the state gathered inside the Capitol rotunda to let legislators know their voices will be heard.

The gathering was a part of the Council on Black Minnesotans (CBM) Day at the Capitol, designed to bring issues of importance in African-American communities directly to the state’s policy makers. The Council presented the rally, that took place on Mar. 19, as a part of its mandated obligation to fulfill civic engagement.

“What we hoped to do is give the public a chance to offer and share ideas with policy makers and support the Council’s recommendations we believe will improve the quality of life for African-Americans in the state,” said Edward McDonald, director of the CBM.

McDonald said the CBM has identified five key areas of concern that it wants addressed by legislators. Those areas are human and civil rights and fair housing, economic development, access to health care, criminal justice reform and education.

“To that point, yes, it would be helpful in our efforts to eliminating disparity outcomes if more funds were available,” said Kevin Lindsey, director of the Department of Human Rights.

Lindsey said the Day at the Capitol is important because the African-American community should have a direct link to the state’s policy heads.

“(This event) creates an opportunity for the community to have a longstanding relationship with legislators,” said Lindsey. “But this interaction has to continue. Change doesn’t happen with just one interaction. Events such as this allow us to build a coalition, and building coalitions is of great importance.”

“Today is the day to let your voices be heard,” said Rep. Rena Moran (DFL-65A), one of only three African-Americans in the Minnesota Legislature.

Moran called on the nearly 75 attendees – some from as far as Duluth – to hold members of the House and Senate accountable to the needs of the state’s various African-American communities.

Minnesota House Speaker, Paul Thissen (DFL- 61B) vowed that the Legislature would be accountable to the state’s African-American constituents and admitted the state has not done a good job in improving the quality of life for African-Americans.

“One of our darkest marks is that we have disparities in economics, healthcare and education,” said Thissen. “We need everybody to succeed in the state of Minnesota and education and jobs are clearly the ticket out.”

Another person heard at the Minnesota Capitol is not even a resident of the state, but has a serious gripe with the state and its foster care system.

Dorothy Dunning, who has taken her fight to gain custody of her two granddaughters from their foster parents all the way to the state’s Supreme Court, called on legislators to enact legislation to ensure qualified blood relatives be given first preference when it comes to determining guardianship of a minor.

“I want to know why you (residents of Minnesota) would waste your tax dollars – $6,000 a month – to raise my granddaughters in foster care when I will raise them for free,” questioned Dunning, a resident of Mississippi. “The system is broken. The system needs to be fixed.”

Dunning vowed that her fight will ultimately change the foster care system in the state.

“I will not stop fighting. Even if I get my grandchildren, I will never stop fighting (to change the system),” said Dunning. “I promise, you will remember me.”