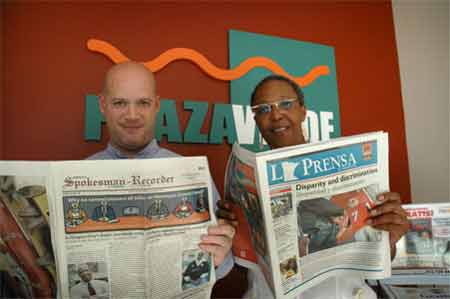 The leaders of two media organizations serving the state’s African American and Latino communities have formed a partnership, called Voices United, for the purpose of creating a stronger unified message and media presence within their communities, and to lead the way for greater understanding and cooperation between their respective readerships.

The Minnesota Spokesman-Recorder (MSR) and the Latino Communications Network (LCN), which includes La Prensa de Minnesota and other publications, expect this partnership to strengthen the political influence and economic prospects of both groups.

MSR President Tracey Williams believes the resulting exchange of news and information will help both communities understand the issues and concerns they have in common and facilitate cooperative efforts to address these issues. “It makes sense that we come together with a stronger voice through two well-respected newspapers that have long served our respective communities,” she said.

Latino Communications Network CEO Alberto Monserrate expressed his equal enthusiasm for the merging of the two companies. “I am very excited about the recent partnership signed between Latino Communications Network and the Minnesota Spokesman-Recorder. This alliance between the most respected Latino and African American media in Minnesota will allow us to be a more effective united voice for our communities.”

Williams believes that the trust both newspapers have established with their readers can, through Voices United, be applied to building greater familiarity and trust among African Americans and Latinos throughout Minnesota and encourage action in solidarity for their mutual benefit. ”Our partnership can serve as a role model for other communities of color to transcend their differences and recognize all we have to gain by working together.”

As an example of concerns both communities share, the current national debate over immigration has fueled more racist extremism and violent hate crimes against Latino people. The Southern Poverty Law Center recently reported a 33 percent growth in hate groups from 2000 to 2005. These groups hope to exploit immigration concerns to their advantage.

“Our community has a long and painful history with such bigotry,” said Williams. ”We look forward to acting in solidarity with our Latino brothers and sisters in opposition to these hateful influences.”

Disparities in jobs with living wages, health care, education and housing/home ownership also adversely affect both African American and Latino communities in Minnesota in comparable measure. In addition to their news collaboration, the MSR-LCN partnership is planning four community informational fairs in the coming months to address these areas of concern.

“Because the African American and Latino communities in Minnesota are already less separated than in many other places,” said Williams, “we can lead the nation in developing a model of open communication and true cooperation. It’s very important that we stop allowing others to drive a wedge between us, preventing collective action in service to our people. I’m excited about this opportunity and what we can achieve together.”

“Combining some of our editorial and commercial efforts will improve information for hundreds of thousands of Latinos and African Americans in Minnesota and help the mainstream community to better know our communities,” said Monserrate.

The Minnesota Spokesman-Recorder is a 71-year-old community newspaper committed to meeting the news and information needs of African Americans. The newspaper publishes every Thursday, reaching over 26,000 weekly readers here in Minnesota and across the country. The Spokesman-Recorder is a strong institution with deep roots in the Minneapolis and St. Paul metro area and an inseparable part of the community reaching the citizens across differences of class and background.

In 2002, the company merged with Nuestra Gente, Minnesota’s largest all-Spanish newspaper. At the end of 2005, in partnership with Davidson Media, LCN launched its own radio station, “La Invasora 1400,” KLNV 1400 AM. LCN acquired La Prensa de Minnesota, the oldest and most recognized Latino publication in Minnesota. La Prensa has been revamped with a new layout and a fully bilingual format geared toward reaching the bicultural Latino community and the American community at large. LCN Media publications have a weekly circulation over 45,000 which translates into more than 100,000 readers each week.

“I am confident that this combined effort between MSR and LCN will create a better source of information for all communities in Minnesota. It will also help advertisers more effectively reach close to 500,000 consumers with a combined purchasing power of close to $6 billion that is often overlooked by marketers in Minnesota,” concluded Monserrate