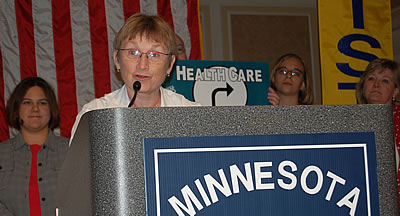 Affiliates of the Minnesota AFL-CIO touted their organizing successes Tuesday at the labor federation’s biennial convention, reporting more than 10,000 workers were organized in the past year.

Minnesota AFL-CIO Organizing Director Tim Geelan said six unions had organized 10,691 members in the last year. The total includes 2,800 Northwest Airlines flight attendants who had been represented by an independent union and decided to join the Association of Flight Attendants, a branch of the CWA, Communications Workers of America.

Representatives of all six unions addressed the convention, emphasizing the importance of continuing to grow memberships despite the difficult climate for organizing. In some cases, unions said they were able to obtain card-check agreements, allowing workers to bypass the often long National Labor Relations Board election process. In recent decades, employers have prolonged the process and have illegally intimidated employees who wanted to unionize.

The ability to organize is linked to electing public officials who support the rights of workers, noted CWA State Council President Tim Lovaasen.

“Politics sets the tone for how we bargain, where we can bargain, how we organize – everything,” he told delegates. “We gotta continue to fight and we have to continue to be involved in politics.”

Hatch, Klobuchar and other labor-endorsed candidates said worker rights would be on their agendas if elected, as would universal health care, fair trade, education, transportation and other issues important to working families.

Klobuchar noted that her opponent, Republican Mark Kennedy, has raised millions through fundraisers with President George W. Bush, Vice President Dick Cheney and adviser Karl Rove. Despite his advantage in fundraising, she is ahead in the polls.