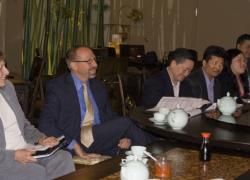 Metropolitan Council Chair Susan Haigh was also in attendance. The Met Council is the lead agency in charge of building the Central Corridor light rail line that will run along the center of University Avenue. There are about 200 Asian owned businesses along the avenue

Approximately 20 business owners along the Central Corridor light rail line attended the meeting, which was held at Mai Village in St. Paul and hosted by AEDA. The purpose of the meeting, which marked the first time Rogoff – appointed to lead the FTA by President Barack Obama in 2009 – or other FTA leaders met in person with Asian businesses owners from the area, was to discuss the impact of the light rail line on Asian businesses and the Asian American community.

Rogoff told business owners he was there to hear firsthand their concerns.

“I’m very frustrated that it took [the FTA] this long to get back to us,” said Va-Megn Thoj, executive director of AEDA, to Rogoff.

AEDA, founded by Asian businesses in 2006, was one of the first groups to widely advocate for small businesses that will be impacted by the light rail transit. AEDA asked for financial assistance to help business survive the impacts of construction and permanent removal of 85 percent of on-street parking.

Central Corridor construction has started in downtown Saint Paul and the western section of University Avenue. Construction of the avenues east of Lexington Parkway where most of the Asian businesses are located is scheduled to begin March 2012.

“AEDA recognized that many Asian small businesses would be put at risk by construction disruptions and future economic displacement,” Thoj said. “In order for Asian businesses to be heard and changes to be made, we had to organize and advocate at all levels.

“Our goal from the beginning was not to stop the light rail, but to prepare businesses for the future and to make sure that the light rail will benefit the community,” he added.

AEDA and Asian businesses filed a complaint with the FTA against the Metropolitan Council in September 2009, four months after a similar complaint was filed by members of the Rondo and African American communities.

Both complaints alleged violations of Title VI of the Civil Rights Act. Title VI says that no person shall be subjected to discrimination under any program receiving federal financial assistance. The complaints stated that the Met Council ignored the discriminatory impact of the Central Corridor Light Rail Transit on Asian businesses and minority residents.

On April 20, the FTA released its finding of “No Significant Impact,” meaning it found the complainants had not provided sufficient evidence to prove that the project would disproportionately harm minority communities.

“I came here when the city was rotten with drugs and prostitution,” said Pham, who has operated Pho Ca Dao on University Avenue for two decades. “I got robbed three times but I decided to stay. We turned this area around but, after 20 years, I don’t see any help. This project is wrong.”

Pham said he and other businesses likely will not survive six months of construction.

Another business owner, Shoua Thao of Shoua’s Clothing on the corner of University Avenue and Dale Street, said she is looking for a parking solution. Since she leases the space for her store, Thao said she has been unable to find assistance. Others present said Asian business owners lack access to capital to help grow and sustain their businesses.

“The perception is that [Asian business owners] are filthy rich and we can survive on our own so no one takes us seriously,” one business owner said.

Rogoff said he wanted to assure business owners that his office is committed to providing an “immediate feedback loop” so that their concerns are heard and addressed during construction. He encouraged them to work with FTA officials in Chicago to set requirements for the monitoring program.

“This will be the single largest transportation project in the state of Minnesota so shame on us if it doesn’t benefit the people impacted,” said Rogoff.