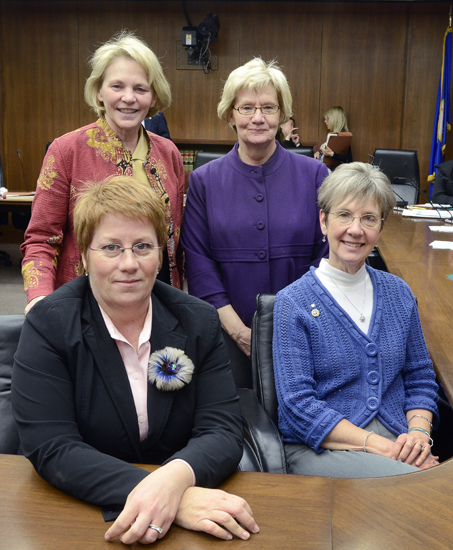 A simple glance at Rep. Karen Clark’s legislative biography shows that her list of accomplishments inside the halls of the State Capitol covers a wide-ranging spectrum of issues.

But no matter the issue, Clark (DFL-Mpls), now in her 16th term, said she continues to utilize her experiences from her first career — as a professional nurse — in her current work as a legislator.

When Clark first joined the House in 1981, it didn’t take her long to realize she was one of a small handful of health care professionals serving as legislators. And she was the only member with a professional nursing background.

“My colleagues were very welcoming and it wasn’t long before it was expected I could speak from that career experience on a number of important issues being discussed,” Clark said, recalling her first months in elected office.

Times have changed. She is currently one of five representatives with a background in the profession. Two members of the Senate also have nursing backgrounds. To put that into historical context, 12 legislators in the 154-year history of the Legislature have listed professional nursing in their occupational profile, according to the Legislative Reference Library.

Twenty-five years ago Ralph Kiffmeyer served one term as a member of the House. A nurse anesthetist, he married a registered nurse, Mary Kiffmeyer, who is currently in her second term. The couple met while they were in nursing school more than 40 years ago.

“You could say both professions run in the family,” said Kiffmeyer (R- Big Lake). The pair has sons and daughters with careers in nursing.

Kiffmeyer, who was secretary of state from 1999 to 2006 before her election to the House in 2008, said her nursing background has been helpful throughout her tenure at the Capitol. Especially in her current assignment as a member of the House Health and Human Services Reform and Finance committees, where she serves alongside Rep. Erin Murphy (DFL-St. Paul), Rep. Carolyn McElfatrick (R-Deer River) and Rep. Patti Fritz (DFL-Faribault), also nurses.

“It’s definitely an advantage to be familiar with the language and lingo and to be able to see from a nurse’s perspective how the people fit into the bigger picture of health care,” Kiffmeyer said.

Although discussions on several aspects of health care reform legislation can sometimes become technical and policy-oriented, legislators with backgrounds in the profession often are able to steer the conversation, when necessary, back to the practicalities of how health care is delivered, said Murphy, who served as executive director of the Minnesota Nurses Association prior to her election to the House in 2006.

Throughout this session, several policy bills related to the nursing industry have been introduced in the House. A bill that would make Minnesota a member of a multi-state nursing licensure compact was passed in the House Health and Human Services Reform Committee. It was supported by the Minnesota Hospital Association and the state-run Minnesota Board of Nursing but opposed by the Minnesota Nurses Association. McElfatrick and Kiffmeyer voted in support of the legislation. Murphy and Fritz voted against it. Other legislation, such as the creation of a “community paramedic,” and a bill that would increase the strength of criminal background checks on nurses has also seen party-line voting among the nurses in the House Health and Human Services committees. Such party-line voting offers evidence that legislators with nursing backgrounds don’t necessarily speak with the same voice on health care issues, Clark said.

“Some of us on the DFL side look at health care as a basic human right and not a privilege,” Clark said, adding that in the last few years she has seen more division on certain health care issues among the legislators who are also nurses. “There may be some divisions across party lines but, in general, as individuals when we talk, there is a lot of commonality.”

Kiffmeyer said it goes without saying that nurses, like members of any profession, can disagree on important issues related to their field. She contends that the current balance of legislators with nursing backgrounds from both parties helps fellow legislators better understand all sides of a health care issue.

“I think sometimes people may wonder when they hear a nurse speaking on legislation, ‘Is that the voice of your political party speaking, or is that the way all nurses feel?’” she said. “That is harder to discern when you have only one party being represented by the profession.”

“It seems like nursing and health issues shouldn’t be a partisan matter,” Abeler said. “The more you have people on both sides of the aisle with those similar career backgrounds, the better you can drive the discussion toward a policy debate.”

Abeler, a chiropractor, added that he sees value in having more health care professionals, and in particular, nurses, providing input in their capacity as legislators on health and human services issues.

“You can’t be an accountant and understand what life is like as a nurse,” said Abeler, who is married to a nurse. “When we talk about issues (legislators with nursing backgrounds) see the faces of their patients, they see the challenges and they know the backgrounds and the families. It’s important to have those types of expertise when we are talking about these important health care issues.”

Clark said that whether she agrees with a fellow nurse-legislator, she has respect for their opinion because of the shared experience.

“In nursing we are taught to be critical thinkers, and to listen to our patients,” she said. “Those are all qualities that we certainly have learned in our nursing education; it’s training with a holistic perspective on health care.”

“Timing is everything,” Fritz said. “And at a time when health care is one of the top issues, I feel like that’s why I’m here: to offer an important perspective from a health care professional who understands both the big picture and the needs of the patient.”