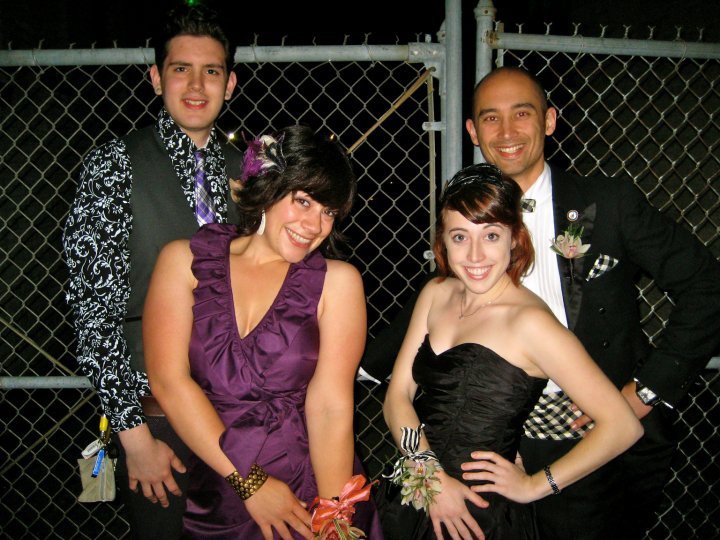 Uptown Kickball Prom was last night. Everyone was squuuuuuueeeeing about it on Titter. They were getting waxed and planning their hair and makeup. I wasn’t. Proms turn me into an adolescent. I have discovered that if you’re going to prom, be it kickball-style or otherwise, you regress to prom-goer age. Or is it just me?

This isn’t the first “prom” that has made me act like a teenage twit. Some friends and I planned a prom bar crawl. We started by taking cheesy pictures. After my dog Ninja posed with little Monty from our building, it lovingly became known as “Dog Prom.” Acting appropriately 16, I compared myself to all the other ladies deciding I looked ugly and should have worn a different dress. We all got drunk and sassy. I introduced a guy I had dated to one of my favorite girl friends and they chatted all night. Then someone kissed someone which caused a couple other someones (including me) to get upset. It ended with me arguing with a rather intoxicated and not-too-happy dude while getting completely drenched standing in the rain. And this all happened at (or outside of) The Front. At least we danced our butts off.

A few months after Dog Prom there was an 80s Prom at the Varsity Theater. Again I felt less than pretty and regretted my dress choice. The two I’d set up at Dog Prom went together, looking smashing. They did it up with corsages and everything. I think I drank too much vodka and cried in the bathroom to @toddodowd. I ended up wrapped in plastic Slinkies with John James Wallace, convinced myself to have a good time, and stuffed a bunch of candy lipstick in my pocket (or bra?) on the way out.

GAYNGS Prom (above) was probably the most successful of my adult prom experiences. @nicycle, @brevig, @johnwallacempls, @sloped, and I all went together. I ordered corsages and boutonnieres from @bastianskoog and we had dinner, took prom pictures posing in dorky ways, and drank vodka. We went to First Ave where we danced, we mingled, and we made new friends (like @petebasgen and @kristahiner). The night was complete with a late night/early morning breakfast at the Uptown Diner. Somehow I survived the night acting like the adult I was, not throwing up behind any vending machines and not crying.

Yesterday I was worrying about it. “Will tonight be more like Dog Prom or GAYNGS Prom?” I’ve always threatened to crash kickball prom. I don’t actually play kickball because I have no ball-eye coordination, or ball-foot coordination, or what have you. I never ended up crashing, but this year I planned on attending. It started out fine until I realized “Oh snap, I have no date.” I whined on the bookface event that I didn’t want to go because I was dateless. Then a friend turned me down because she already had a date. Someone didn’t want to tell me who she was going with for fear I’d read into it. I turned down an offer because I didn’t want to scare off all the eligible bachelors and then eventually stole my friend from her boyfriend and set him up with another man-friend. I don’t think I could make this feel more highschooltastic if I tried.

Yesterday evening after deciding I would not get excited, I spent over an hour getting ready and then did just that: I got excited about Prom. I came to terms with the fact that these events don’t matter. I’m not 18 and I don’t need flowers or boys to go to a prom. So we put on our puffy-sleeved 80s dresses (I borrowed one of the ones I was jealous of at a previous prom!) and dressed our dogs in bowties and ribbons. We took pictures, slow danced, and drank bubbly. Prom didn’t suck. I even had a date (and she’s a hot one!), and my dog Ninja came in second for Prom Queen.

After the dance, we went to the Country Bar for the post-prom party. This is when it turned hilarious. Drunk people in prom dresses (both men and women) and suits, singing karaoke, eating onion rings, and trying their damnedest to find someone to hook up with. There was a couple making out at the table I was sitting at. One guy was playing cupid and asking a friend of mine if he was interested in another friend. More than one person was telling everyone how incredible they are. Drinks were spilled, ice was thrown, and smooching was accomplished. There were women draped on men, men draped on men, dogs draped on men – oh, no, the dogs were gone by then… It may not have been just like high school (more bubbly, more karaoke, and more attractive people) but there was definitely the same kind of drama. I observed and took note and then took my poufy-sleeved self home. I’m not saying that I’m not ever, or often, part of the drama, because even a 27-year-old woman can act like an immature idiot when faced with a big group dance, but I decided last night that I wanted to just sit back and watch the MNcest.