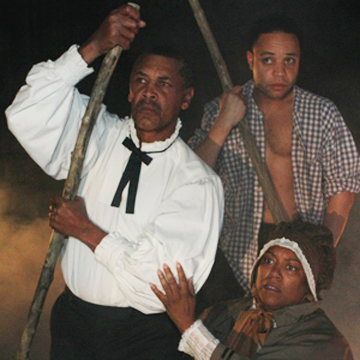 On February 19, over 300 people attended the History Theatre’s telling of Reverend Robert Hickman’s escape from slavery in 1863 from Missouri with 75 people on a crude raft traveling north in search of freedom along the Mississippi River. A 13-member cast and a chorus performed to an audience of largely retirement-age attendees at the E.M. Pearson Theatre on the campus of Concordia University. This play was not mere entertainment: it was the painful revisiting of our country’s history of slavery.

“We need to tell this story now—right now—because people forget or they start to sand off those uncomfortable moments that make up our history.” said playwright Brian Grandison.

Louverne Williams, a black teacher from Minneapolis during the 60s, when asked if the play was an accurate story, calle the play “important,” though she noted that it “does [take] poetic license [with] the many stories of migration of the blacks to the north.” Williams suggested reading The Warmth of Other Suns by Isabel Wilkerson. “It is [about] the migration of six million blacks to the north from 1915 to the 1970s.”

The stage had a gigantic backdrop of historical photos of people of Pilgrim Baptist Church, and simple props consisting of a few wooden blocks and a crude raft. A chorus of unseen singers could be heard during the two-hour production.

The slaves depicted in the play made their way to St. Paul and founded Pilgrim Baptist Church, the first black church in Minnesota. More than 150 years later, the church still stands in the Rondo neighborhood of St. Paul as a testament of the brave people who came.

E.M. Pearson Theatre at Concordia University, 312 Hamline Avenue, will host the production through February 27. Call the History Theatre at 651-292-4323 or see historytheatre.com/tickets.