“It wouldn’t just help me, but it would be a support to many other families that I know,” Adriana Lara spoke with conviction in favor of LNA taking a position to increase the state’s minimum wage at General Membership in January. Adriana’s compassion for other families has made a clear home for her in the Lyndale Neighborhood and shaped the work LNA does in the neighborhood.

Adriana has had a long journey from her family’s home in Mexico to find her community here in Lyndale. She grew up one of twelve children in a small town called Pachuca Hidalgo. Her father ran a chain of local stores and tortilla making factories, so as soon as she was old enough Adriana went to work. By her twenties she was managing one of the stores and one of the tortilla making factories. Her life outside of work was entirely her famil, caring for nieces, nephews, and her aging parents, with whom she lived.

In her early thirties, Adriana decided to come to the United States with her brother-in-law in order to complete her dream of going to beauty school. She left without telling her parents, planning to return within a year. It has been seventeen years, and she is here still.

Although Adriana has lived in the area for many years, she first got involved with LNA in 2012 when she participated in half of that year’s Women’s Leadership Program. This year Adriana took her chance and joined again, to complete a whole year with the program. This second year, she learned the most from field trips and the speakers, “Before, I didn’t know what a City Council person was.”

The program has changed Adriana’s daily activities in the neighborhood. She used to spend more time at home, doing chores and helping her kids with their homework. Now she attends meetings, visits her friends from the program, and spends time at her daughter’s school. Adriana’s involvement has brought back her desire to make a difference in her community, which has been important to her since she was a child. 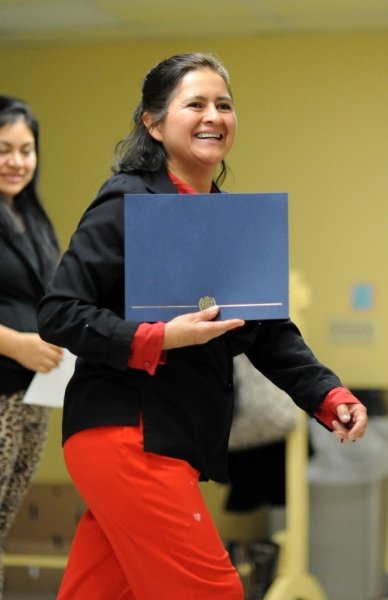 In October, Adriana joined the canvassing team to educate her neighbors about voting and talk to them about their concerns. She was the team’s most dedicated member, going out more than any other volunteer with her daughter Paola’s help.

Adriana discovered canvassing was a way for her to connect with “her [Latino] community.” It was really important for her to connect with her neighbors at their doors and listen to their stories, she wanted to find time to “really listen to all of them.” During her days of canvassing, Adriana got to know the needs of the community. She met many people with problems “with their housing, work, and rights…people are really suffering.”

Adriana understands economic challenges, when she arrived in the country she came to Minnesota to work as a live-in nanny for two children at the rate of $100 a month. Her jobs since then have been marginally better, but now she is a single mother with two children.

After canvassing through the month of November, Adriana met with the rest of the canvassing team to talk about what they had heard. She brought the voice of the Latino community to the table, which really shaped the conversation. Adriana explained, “we don’t always have [documentation] but we have rights.” The group decided to pursue a conversation with the community about whether or not LNA should support an increase in the State’s Minimum Wage.

Adriana continues her work on the Minimum Wage Campaign in Lyndale through canvassing and other community events. She also works with Mujeres en Conexion, a group formed out of the 2013 Latina Women’s Leadership Program, to connect Latino families with resources in the neighborhood. She is convinced that “we all have to be united…we have to support each other and agree in order to shed light on what’s really going on.”