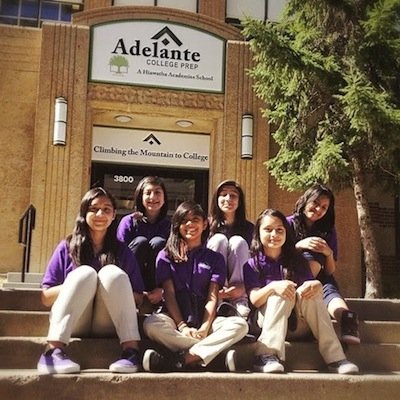 Kylah Bobo, a 7th grader at Hiawatha College Prep Academy, may like listening to hip hop and KDWB, but she’s excited to learn the flute as part of her school’s new orchestra program. “I like the sound it makes,” she says of the flute. “It’s soft music. It’s pleasant to the ears.”

Adelante College Prep Academy, the new middle school wing of Hiawatha Academies that opened last year, is gearing up to launch an orchestra program starting this spring, and holding an instrument drive to provide for all of the 7th grade students that will participate.

Jonathan Cruz, also a 7th grader, wants to learn how to play the clarinet. One of the reasons he wanted to learn to play is because at the beginning of the year, his class watched a movie called El Sistema, about José Antonio Abreu’s work in Venezuela creating a network of children and youth orchestras that serve young people in poverty. Cruz himself likes Latino music, he says, especially the kind that his mom plays. “It gives you more of a story than songs by Justin Bieber,” he says.

Elizabeth Winslow, the music teacher, was hired in August, after a stint working for the Northside Achievement Zone and teaching in rural Minnesota before that. When she was looking at job postings, the posting for Adelante said they were looking for a nusic specialist who could create some kind of music program. “The idea is to get that off the ground running,” she said.

Winslow hails from Denver, Colorado, and started learning music early in life. By the time she was in 5th grade, she knew she wanted to be a music teacher, and eventually got her training at Gustavus Adolphus. Her specialty is in instrumental music, hence the instrument drive to start up a band program.

The instrument drive, which is part of MPR’s Play it Forward program, is making good progress, Winslow said. Their biggest donation has been from Vega productions, which donated about a dozen instruments. They’re eventually hoping for about 50 instruments, enough for all the 7th graders.

“It’s been really exciting,” Winslow said. “I took this job very intentionally.  The staff and the kids are really inspirational.  It’s exciting to come to work every day.”

Now Winslow teaches three sessions of music a day, teaching students rhythm and how to read music and other fundamentals. Kylah Bobo said her favorite thing in class so far was playing the bucket drums. Unfortunately, the piano was not working when I visited the school on October 14, but Winslow said it was only temporary.

In her three sessions, Winslow sees all the students in the school. In addition, she teaches two homeroom classes and fitness time, which she says is like recess, as well as her lunch duties.

Her day starts at 7:10 in the morning and she stays until 5 p.m., except on Fridays when she leaves at 4:15. She sometimes works at home in the evenings and weekends as well. It’s a lot of time, but she says at Adelante she’s able to do more during the school day than at other jobs she’s had. When she was teaching band in rural Minnesota, she didn’t have any prep or lunchtime. “It’s tiring,” she says, “but they do respect that it takes time to prepare.” 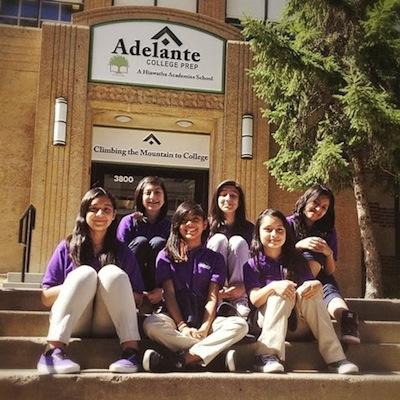 In the school, the teachers are observed weekly by the principal and have follow up discussions with the principal every week.  There’s also an “observation room,” where people can watch a class through a two-way mirror, for lab classes where they are trying out new things . That is not part of the music classes.

“I’m one of those people that loves having people in my classroom,” Winslow said, so that when things aren’t going well, she can receive feedback.

Adelante Academy is 85 percent Latino, but doesn’t have a particular culturally specific programming. According to Ambar Hanson, the community engagement director, Spanish is offered and certain Latino cultural events such as Día de los Muertos are celebrated.

“We recruit from all of the communities, however we did start with a large Latino population from the get go,” she said. This may be due to the fact that the building previously housed San Miguel, a Catholic school that catered toward a Latino population.

The students wear uniforms, but Jonathan and Kylah don’t mind. “They chose nice colors,” Kylah said. She likes the school, and said it meets high expectations. “It helps kids get into college,” she said.

Jonathan also likes the school, and feels the teachers are always there to give extra help if he needs it. In the past, he said, he wasn’t good at reading, but his teacher helped him find good books to read, and so he got addicted to the Percy Jackson books.