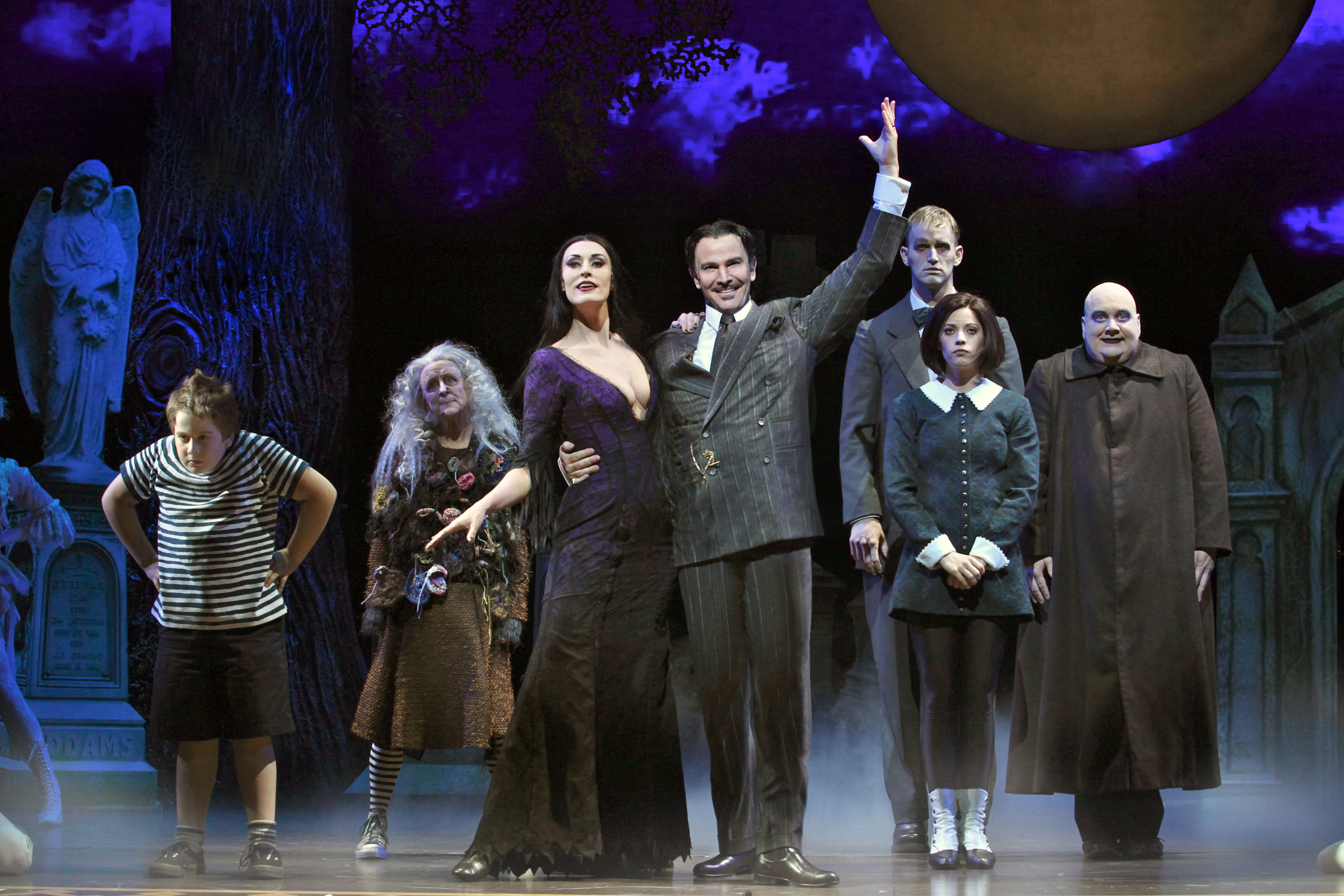 In The Addams Family musical, the famously morbid tribe must welcome into their Gothic mansion a family who are distressingly lively and bright. But there’s a larger problem that they’re not allowed, except for one sly aside about word-of-mouth, to realize: they’re in a Broadway musical, a genre as antithetical to unhappy endings as country music is to flag-burning. A successful Addams Family musical would steer into that skid, would deploy the contrarian Addamses to tear down the walls of a genre that’s desperately in need of renovation. Instead, the characters inhabit this by-the-numbers show like the brand they are, answering to their names but not their natures.

I’m not the first one to pan this particular production: upon its 2010 Broadway debut, with Nathan Lane and Bebe Neuwirth in the starring roles, the critics pounced. (New York Times: “A tepid goulash.”) Audiences haven’t given a damn, though, and The Addams Family is currently the Great White Way’s third highest-grossing show on any given week. Proving once again that producers care what critics think a lot more than audiences do, the show was signficantly retooled for the touring production now playing at the Ordway. A song about sex with a squid was cut, and the plot’s central conflict was changed.

I haven’t seen the Broadway version, but I was surprised to learn about the specific nature of the changes to the plot—because if you asked me what to do with the show, I’d push it right back in the Broadway direction. More uncomfortable encounters and less contrived conflict between Gomez and Morticia. The new central conflict has Gomez (Douglas Sills) torn by his promise to his daughter Wednesday (Cortney Wolfson) to keep her engagment secret from his wife (Sara Gettelfinger).

The fact that Wednesday’s old enough to get married (albeit young) while her brother Pugsley (Patrick D. Kennedy) apparently stays the same age is typical of this show’s sloppiness. Rather than precise observation of eccentric but coherent characters, the Addams Family musical shoehorns the characters into what’s basically the plot of La Cage Aux Folles. Seeing Lane in the Broadway production must have felt especially tragic for those who saw him in The Birdcage, Mike Nichols’s wonderful 1996 American film adaptation of La Cage. The Addams Family musical is even shameless enough to make the father (Martin Vidnovic) of Wednesday’s fiancé (Brian Justin Crum) a conservative Republican, not that the script actually does anything inventive or funny with that trait.

The musical’s book is by Marshall Brickman (a notable Woody Allen collaborator) and Rick Elice, and it’s there that lurk any vestiges of connection to Charles Addams, the New Yorker cartoonist who created the characters. There are several lines that feel sharper than they need to be in the context of this sad-sack musical, such as Gomez’s reply to a query regarding whether the house has a little girls’ room. “We used to,” he says with regret, “but we set them all free.”

Andrew Lippa’s a capable lyricist, but his songs are nothing more than running jumps to the sustained concluding notes that tend to motivate audience members to clap, which tends to convince them that they’re actually watching a good show. Phelim McDermott and Julian Crouch are credited as “original directors” with no current director listed, which might explain a lot about the flat characterizations and unimaginative blocking. Colombian choreographer Sergio Trujillo endured the gratuitous Latino caricaturing of Gomez (memo to the world: incorporating Mexican foods into made-up Spanish names is officially no longer funny) to deliver some spirited steps, especially in the celebratory tango.

The best thing about the show is the Drama-Desk-Award-winning set by McDermott and Crouch, especially the lovely setpiece depicting a yard and a tree with a rope swing overlooking New York. If you’re thinking that there’s something wrong when an Addams Family review includes the word “lovely,” my response is: exactly.