Actor Dennis Hopper gets a star on the Hollywood Walk of Fame March 26.

HOLLYWOOD, CALIFORNIA—Dennis Hopper will be the next star on the Hollywood Walk of Fame, according to the firm that makes the famous stars.

Hopper’s star will be unveiled March 26, says David Paternostro of Top End Constructors, whose family business has been making the brass and terrazzo stars for three generations. I interviewed Paternostro at an Academy Awards media reception sponsored by the Hollywood Chamber of Commerce March 5.

Hopper, 73, is best known for his role in the 1960s movie Easy Rider, for which he was nominated for an Oscar. Hopper received a second Oscar nomination for Hoosier. He was also in the films Apocalypse Now, Rumble Fish, Blue Velvet, and Speed. Hopper has done several television shows, including 24 and Crash. He directed the movie Colors. Hopper is also a noted photographer.

Putnam says Hopper will select either the motion picture or television symbol for his star. The honoree gets to select the location on the sidewalk for their imbedded star. An induction ceremony will be held to dedicate Hopper’s star.

The Hollywood Walk of Fame is a sidewalk along Hollywood Boulevard and Vine Street where Hollywood icons are immortalized with a star bearing their name and entertainment field. The Walk of Fame also displays names outside the entertainment arena. The stars are not purchased, but are nominated, according to the Hollywood Chamber of Commerce. The Chamber makes the final selection of the individual to be honored.

New this year is a 50th anniversary Hollywood Walk of Fame plaque below the name. There are over 2,400 stars on the sidewalk.

“We have several stars in stock and we order the letters. We keep fifteen of every letter on hand,” says Paternostro. Approximately 25 stars a year are chosen. The company gets a one-month or one-week notice to make a star. The five-pointed stars take four days to install.

Top End Constructors is a terrazzo floor company started by Paternostro’s father in 1958. Producing and installing Hollywood Walk of Fame stars is just one of their jobs. 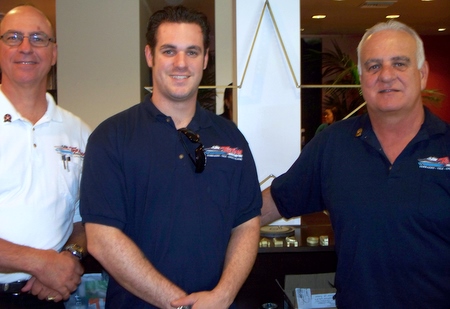