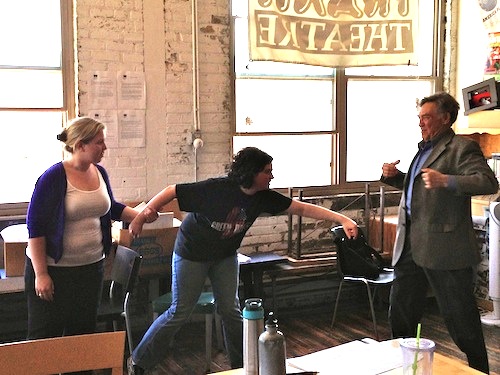 Last January, Maria Asp, a local actress and theater educator attended a conference sponsored by United Way that was all about school reform, touting the successes of school districts in Miami and New York City that have closed schools, laid off union teachers in favor of non-union ones and implemented “data-driven” and other reform policies. Asp found herself getting angry listening to the conference, where she felt that everybody was just repeating the same thing over and over.

“I thought, ‘This could be a drinking game,’” she said. “We all take a drink every time someone says ‘data driven instruction.” Incensed by the speakers bragging about laying off union teachers, and blaming teachers, she thought to herself, “This is a world of public schools that I don’t know.”

Along with other artists and educators, Asp decided to take a stand against teacher blaming and over-testing by starting a group called Act for Education, which had its first meeting on June 13. Asp’s hope is to eventually create plays that take political issues surrounding education into the community, at parks and other venues.

The meeting included eight women who are all either teachers or involved in education, as well as scholar Jack Zipes, who developed much of the curriculum for the Children’s Theatre Bridges program. Asp runs the Bridges program, but says that the Act for Education group is not affiliated with any organization, but rather a group of individuals coming together to try to make a difference.

Shannon McManimon, a doctoral candidate at the University of Minnesota gave a presentation about high stakes testing and research, which began with No Child Left Behind policies and continued through the Obama administration. McManimon talked about privatization of schools, not just through charters, but with the billion dollar test industry that benefits corporations such as Pearson, with much support for these privatization policies from foundations like the Gates Foundation and Walton, the foundation associated with Walmart.

McManimon said that policy makers need to make sure that reforms, which are needed, benefit students, not corporations.

Julie Sabo left teaching in 1999, and came back in 2010. “It was scary when I realized the reform movement reached my school district,” she said.

For Sabo, the achievement gap is not so much the problem, as a symptom of a greater problem. “We need to address the factors creating the gap,” she said. “Minnesota has measurable gaps in education, employment and housing.”

Sabo said she once had an experience, back when teachers were allowed to see the standardized tests (in this case it was the Northwest Achievement Level Tests), when one of the questions described a girl walking by a yard and a dog was barking with arrows pointing at its mouth. The sentence read “The dog barks ferociously,” and the students were supposed to answer what the woman felt as the dog went by. The correct answer was that they were supposed to be afraid of it, but many of her students answered that they want the dog. As they were all from impoverished neighborhoods in North Minneapolis, their answers made sense — of course you might want a ferocious dog as a means of protection.

Other teachers complained of teacher bashing, and how all the focus on testing makes it harder for teachers to think creatively and bring in creative ways of learning, such as the Bridges program.

Rachel Austin, another participant, wrote down strong images that came out of the discussion. For example, Ann Webster described school reform as a school of fish following a disastrous idea. After the discussion, the meeting broke into groups and created short scenes based on these images. They’ll show the scenes in a private setting this week, but eventually hope to bring them to the public.

Act for Education has a WordPress blog and a Facebook page, if you’re interested in finding out more about them.