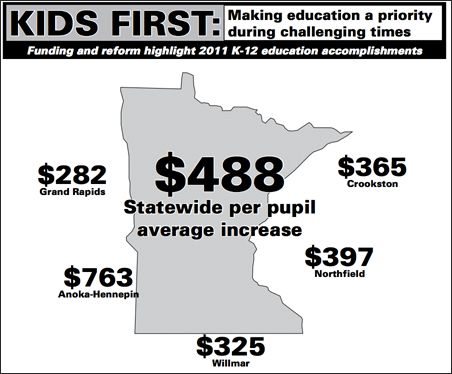 These numbers are accurate — but only in the same way it’s true that withholding 40 percent of school funding adds up to a balanced budget.

Wielded with enough might, it turns out a spreadsheet makes a pretty good blunt instrument.

Midway between July’s blitzkrieg special session and November’s referenda-heavy election, Minnesota House Republican leaders are revving up the message machine. The state’s public schools, they insist, are getting hefty budget increases and might not truly need the levies.

They’re circulating materials [PDF] that suggest that far from being in a financial crisis, schools will get an average of almost $500 per pupil in new funding in fiscal year 2012. The figures have been making the rounds in political circles for some time, and appear to be the underpinnings of a campaign to defeat the 120-plus operating levy requests appearing on ballots in November.

They’re accurate — but only in the same way it’s true that withholding 40 percent of school funding adds up to a balanced budget.

The GOP leadership arrived at the numbers via a wholly new calculation that depicts public education as the session’s big winner, not by using the traditional method of calculating ups and downs in education revenue.

This week, the murmuring campaign burst onto the public stage. On Tuesday, DFL lawmakers announced plans to tour the state explaining their disappointment with the session’s final education package. Immediately House GOP leaders struck back, releasing a set of numbers they said showed that schools were receiving a generous increase in funding — the first in quite some time.

According to one of the GOP documents, schools will receive an average of $488 in new money this year. Northfield will get almost $400 more per student, Crookston $365 and Anoka-Hennepin, the state’s largest district, an eye-popping $763.

Contrast those figures with the more traditional ones posted online in July by the Department of Education’s number crunchers. The statewide average they computed comes to just $230, and the increase Anoka-Hennepin can look forward to only $257.

The underlying accounting trick? When policymakers talk about education finance, they compare, in their parlance, base over base — base being the last piece of budgeting legislation passed.

And base over base [PDF] being the apples to apples comparison used “since time immemorial,” in the words of the Association of Metropolitan School Districts Executive Director Scott Croonquist.

Illustrations are in order. In 2010, when the Legislature adjourned without passing an education package, base was the budget passed in 2009. If there had been no special session this year, base would still have been 2009. Base for 2012 will be the 2011 bill passed in July.

Base does not, however, mean the same number of dollars from one year to another. Under state law, special education reimbursement has an annual cost of living increase (which is actually far less than the actual increase), for example.

And other segments of the funding stream adjust automatically as well — some according to the amount of, ahem, base funding allocated to schools. Compensatory aid, the money used to compensate districts with concentrations of impoverished kids, adjusts along with the pot of money we think of as basic “tuition” dollars.

The only new money?

And the only real new money in that pot this year and next is the $50 per year per student Gov. Mark Dayton demanded to offset the costs of district borrowing that will be triggered by the shift. That alone explains $100 of the $230 average base over base per-pupil increase.

To arrive at the set of numbers that describes schools as flush, the lawmakers compared budget to budget [PDF], a figure that encompasses money the Legislature has no responsibility for debating, finding or allocating. It includes all of the aforementioned increases, increases for projected enrollment increases, targeted federal aid, food service reimbursements and — this is the whammy that accounts for the big differences — local referendum dollars.

Experiencing math anxiety? Stick with me for another illustration.

If a district — let’s call it Lake Wobegon just for irony’s sake — passed a levy last fall, the resulting money would not be collected until 2012. Not part of the “base,” it would show up in the budget-over-budget calculation as an envelope stuffed with new money.

Even if you are willing to concede that — and it is factually accurate to say that Lake Wobegon’s gross revenues will be higher than they were last year — it’s not new money appropriated by the Legislature. And if you take the trajectory of state funding over the last decade into account, it’s not true that schools are getting a real increase.

“State aid per student for K-12 education increased over the past eight years, but at a rate well below the rate of inflation (15 percent increase in aid/student vs. 20-35 percent inflation, depending on the inflation measure used). Property tax levies per student for K-12 education more than tripled between 2003 and 2011, and more than doubled after adjusting for inflation. Voter approved operating referendum levies accounted for most of the increase.

In other words, the “new” levy dollars used to create those rosy budget-over-budget materials is based in large part on money local communities voted to tax themselves to make up for dwindling state aid.

Yet in a recent constituent newsletter, Rep. Steve Drazkowski, R-Mazeppa, urged voters to reject referendum requests, insisting that schools came out of the legislative session with a “windfall.”

“Despite these very generous funding increases — paid for by you, the taxpayer — 133 school districts statewide are considering asking their local property taxpayers to pony up even more money — the largest number that would call for a vote in a decade,” he wrote.

In at least 120 of those districts, this “windfall” is based on operating levies that school administrators are seeking to renew. So if voters heed the call of Drazkowski and his partisans to reject the referenda requests, a sizable chunk of the supposed windfall will evaporate.

Some districts are asking voters to approve an increase to make up for the net reduction in state aid, but the more crucial vote is to continue existing levies.

“They’re just trying to hang on to what they have,” said Croonquist of the districts. “This is the kind of thing we battle all session.”

Levies, it should be pointed out, were never supposed to be used to pay bus drivers and electric bills. They were supposed to go for capital improvements and other big-ticket items. And — and we’re working up to another fiscal awareness post on this one soon — they are inherently and hugely inequitable.

One final number needs parsing before we wrap this post up: That whopper increase Anoka-Hennepin supposedly is in line for. This is perhaps the most disingenuous number on any of the spreadsheets.

The $763 figure includes an assumption from the February financial forecast that Anoka-Hennepin’s very large teachers union would join the state’s pay-for-performance program, Q-Comp, starting in 2013. New Q-Comp money accounts for $270 per pupil of the $763 figure.

The state is supposed to reimburse districts for the higher costs of implementing Q-Comp, a controversial initiative spearheaded by former Gov. Tim Pawlenty, but has never fully funded the program. And in any case, last spring Anoka-Hennepin’s teachers voted no on Q Comp.

To all of this, Department of Education Communications Director Charlene Briner would like to add one observation: that neither set of calculations has anything to do with deciding whether Minnesota’s children are receiving an adequate education.

“We have always tried to divide the pie up fairly,” she said. “But we’ve never defined the cost of educating kids to the standards we’ve identified.”

For politicians, I’d wager, that math is even tougher.