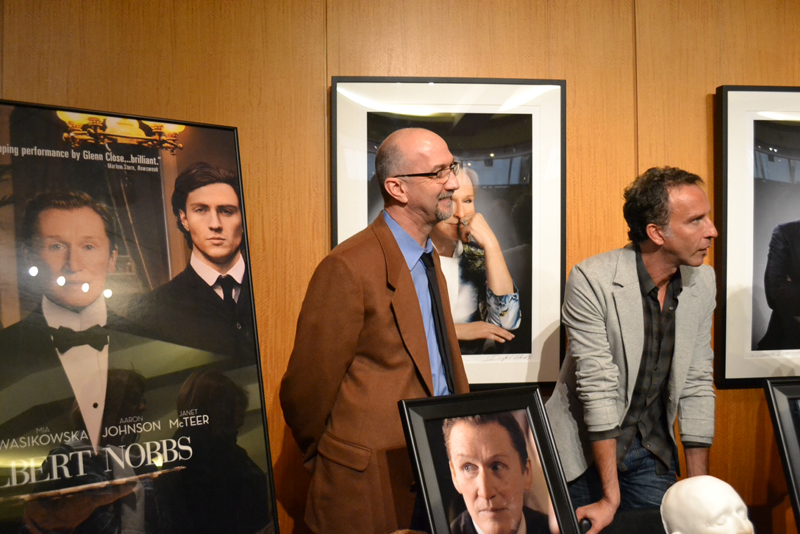 Matt Mungle and Martial Corneville. Below: props used in The Iron Lady, Harry Potter and the Deathly Hallows Part 2, and Albert Nobbs.

BEVERLY HILLS, CALIFORNIA—Saturday afternoon Jamie Millard and I navigated the beautiful neighborhoods of Beverly Hills to attend the Makeup Artists and Hairstylists Symposium, hosted by Academy governor Leonard Engleman, to honor this year’s nominees for best makeup, which takes place yearly at the Samuel Goldwyn Theater. Though we had both read Barb Teed’s pieces about the event from previous years, we weren’t totally sure what to expect from this event, but even if we had settled on any sort of fantasy about what would happen at this event, we still would have been surprised about what the Academy had in store for us.

The nominees this year include artists who worked on the films Albert Nobbs (Martial Corneville, Lynn Johnston, and Matthew W. Mungle), The Iron Lady (Mark Coulier and J. Roy Helland), and Harry Potter and the Deathly Hallows Part 2 (Nick Dudman, Amanda Knight, and Lisa Tomblin). Upon entering the theater we were given some fantastic booklets full of information about each artist, which included lists of selected credits, and photos from film sets. My favorite tidbit gained from the book is that J. Roy Helland (hair and makeup on The Iron Lady) has been working with Meryl Streep for 37 years, starting with her first New York stage appearance in Trelawny of the “Wells.” 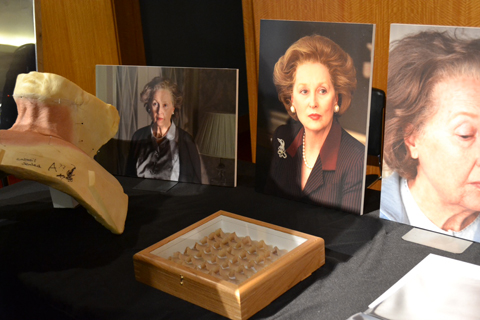 Prior to the start of the symposium, the lobby of the theater was lined with tables of costume components ranging from prosthetic facial features to wigs and facial hair. Some of the most interesting pieces were Margaret Thatcher’s aging neck (worn by Streep in Iron Lady), the intricate beards of Harry Potter, and the cheek/ear plumpers worn by Glenn Close and Janet McTeer in Albert Nobbs. The artists were all standing behind the tables with their work, posing for pictures, and generally of the disposition of folks who had been nominated for amazing awards for work they are passionate about.

As an introduction to the event, a clip of the 1981 Oscars was shown—the year that the Academy made the decision to start acknowledging the work of makeup artists and hairstylists. Nominees that year included artists form only two movies, Heartbeeps (Stan Winston) and American Werewolf in London (Rick Baker). American Werewolf walked away with the award, becoming the first movie to win an award for Best Makeup. 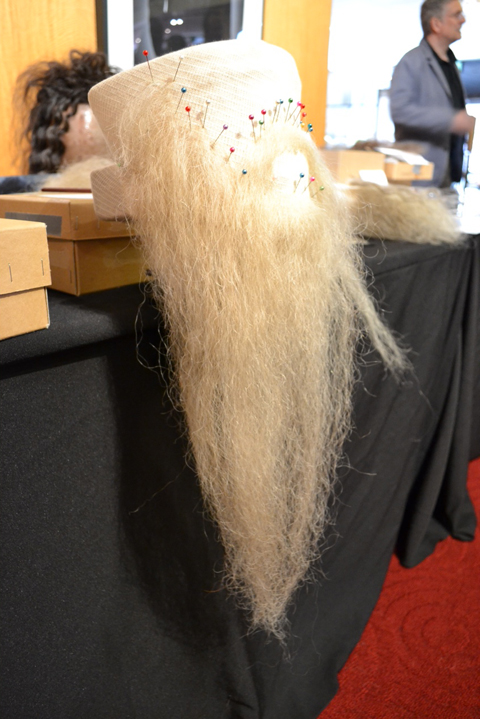 Once the symposium began, each group of nominees were brought up to the stage to discuss their work, with movie stills for reference, and then clips of the movies were shown. The discussions were fantastic, and it was incredible to learn a little about the apparently tight-knit world of makeup artistry.

Both Meryl Streep and Glenn Close were brought to the stage to discuss their respective roles and movies with the nominees. It was incredible to hear Close talk about her work on the movie Albert Nobbs, which she was also a screenwriter for. And it was breathtaking to watch Maryl Streep discuss her art with her long-time makeup artist, all the while singing his praises. Fantastic and inspiring. 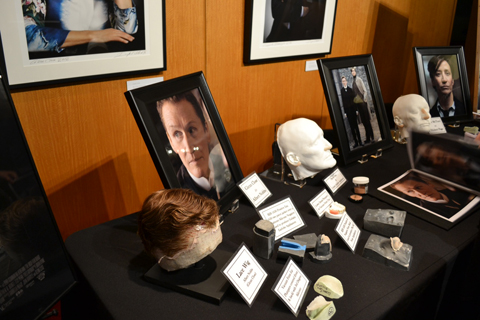 Over the course of the afternoon we learned some very interesting things:

• There are two main types of material used for prosthetics: gelatin and silicone. Gelatin was used for most of the Harry Potter pieces, while Albert Nobbs used silicone.

•  All of Lord Voldemort’s veins, though typically veins are airbrushed, were made into temporary tattoos and applied daily.

• New prosthetic noses were made for Meryl Streep daily for her role as Margaret Thatcher.

• Due to budgetary concerns, J. Roy Helland was forced to rent wigs for The Iron Lady, and they gave each wig a different woman’s name.

• Yes, that is Meryl Streep’s real forehead in The Iron Lady.

• Because Lord Voldemort’s nose isn’t described in detail in the Harry Potter books, it was up to the producer to choose the final visual of Volemort’s evil face. The removal of Ralph Finnes’s nose is digital.