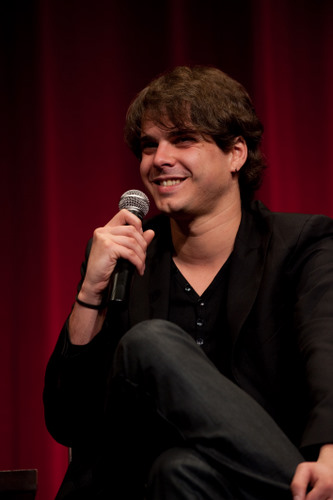 Director Javier Recio Gracia (The Lady and the Reaper [La Dama y la Muerte]), who was part of the "SHORTS!" event Tuesday at the Samuel Goldwyn Theater in Beverly Hills. Photo by Greg Harbaugh, © A.M.P.A.S.

BEVERLY HILLS, CALIFORNIA—”This is the ultimate sell-out,” host Peter Riegert told the audience at the Samuel Goldwyn Theater. “More than any other Academy event. Every seat sold out in 15 minutes.”

The filmmakers nominated in the Animated Short and Live-Action Short categories were being honored by the Academy of Motion Pictures Arts and Sciences on Tuesday with a screening of all ten of the films.

Why are shorts so popular? Riegert quizzed the crowd. “Audiences recognize a good thing. These are real film makers that sweat and fight and go out and get it done. They got here because of an idea they had.” Riegert should know: he was a Live Action Short nominee in 2001 for By Courier.

Animated and Live Action Shorts are “like the little brothers of full length feathers. Short films are getting more popular than ever and are breaking [box office] records,” he explained.

Earlier, the nominees met with the media at a reception. Spanish filmmaker Javier Recio Gracia’s film The Lady and the Reaper is nominated in the Animation category and features an elderly lady hoping death will reunite her with her deceased husband. She wakes up in a hospital ward to a doctor trying to bring her back to life.

Gracia’s film is based on personal experiences with his grandmother’s death. “My grandma was passing away very slowly and nicely with my family,” he says. “But some people aren’t so lucky. Lots of people die long and painfully. It’s something new and important in our society.”

This is the first Oscar nomination for 28-year-old Gracia—and his first movie. “I worked in a studio and the studio gave me the funding and I had a lot of luck,” he says. “I am not an independent, I work for a studio.”

He said he sketched his idea on a storyboard then later in animation. “It took one and a half years and 25 people working on it.”

Phelan, of Ireland, has been enjoying the attention being an Oscar-nominated filmmaker brings. “I have heard from everyone in my life, including the girl who sat next to me in the third grade,” he says.

In the Short Film Live Action category, director Juanita Wilson got her movie idea from a page and a half story a man wrote about his experience with the Chernobyl nuclear disaster. “His story was so profoundly moving I decided to turn it into a film. I was turned down twice. But I have a passion and I have patience.”

Wilson, also from Ireland, said she has had a very good response from her country on her Academy Award nomination.

It took a year for Drew Bailey and Luke Doolan to find funding for their nominated Short Live Action film, Miracle Fish. The film features child actor Karl Beattie, who is pivotal to the plot. He was the first and only actor considered by Bailey and Doolan.

The Academy Award-nominated films in the Animated Short and Live-Action Short categories are:

The Lady and the Reaper

A Matter of Loaf and Death

The nominated Animated and Live Action Shorts are playing in Minneapolis at the Lagoon Cinema.