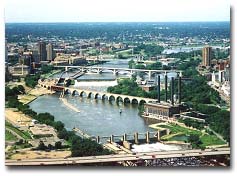 From Army Corps of Engineers site

The Minneapolis Riverfront Design Competition announced its winner on February 10—a compelling vision for a clean, efficient, culturally diverse future for North Minneapolis. Where today there are smokestacks and polluted land, the plan foresees that North Side residents will one day enjoy river walkways, environmentally responsible housing, and good jobs in a high-tech green economy.

If implemented, the plan promises, people will be lifted from poverty and into a healthy, meaningful life. It’s a far cry from what North Siders live with today and, with respect to history, a very different vision than the one first presented in 1999 and adopted in 2000, back when Above the Falls was known as the Upper Mississippi Redevelopment Master Plan. So if some of the older folks who remember the first version of the plan are a little skeptical, it’s worth a look back to see why they might be reserving their enthusiasm.

Once home to the city’s wealthiest residents, North Minneapolis today is a community that perpetually teeters on the edge of stability. The poverty, crime, and geographic isolation that plague the North Side have driven bold talk about revitalization for decades. The plan’s architects and those who will oversee its implementation speak of a grand vision for the future. Indeed, the winning design, co-created by Tom Leader Studio, sounds great. It’s chock-full of things people have wanted for years—better storm water management, investment in mass transit, more community gardens, safer biking paths, more parks along the riverfront.

Some neighborhood residents aren’t ready to celebrate just yet. The North Siders and Northeasters who commented on this story expressed a cautious interest in what’s happening nowadays with the plan—they’d love to see something good come out of it. But history to date hasn’t given them much reason to be optimistic, and the state’s current political and economic climate makes the plan’s future anything but certain.

A succession of plans

“What final plan?” asks John Haluska with a laugh. A long-time Northeast resident, he was deeply involved in the Above the Falls Plan until a recent move took him out of the city. “I have seen so many final plans [for the riverfront]. There have been grand plans and piecemeal plans and all of them have been labeled ‘Final Plans.’ There’s got to be a warehouse somewhere like the one in Indiana Jones labeled ‘Final Plans.'”

Haluska described a succession of plans and of architects who have come and gone over the years-the first was with a now-defunct firm called BRW. He and others also alluded to a high turnover rate at the city agencies and community organizations involved, giving a sense that the plan has changed hands several times over the past decade. Currently the Park Board is in charge. But back when the plan first came into being, the Department of Community Planning and Economic Development (CPED), then called the Minneapolis Community Development Agency (MCDA), was the lead organization driving it forward. The vision back then, as reported in the City Pages by Burl Gilyard, sounds quite different from the one unveiled last week.

Controversial from the start

Gilyard’s article speaks of tense community meetings, where the prospect of mass demolitions of homes and factories was seriously discussed, along with visions of brand-new communities where “high-density, upscale housing, office buildings, and public leisure spaces” would dominate the landscape. The keys to this vision were former Third Ward City Councilmember Joe Biernat and something called attrition—a change of zoning laws that would make it difficult for existing business owners to make large-scale investments, and therefore increasingly difficult to do business along the riverfront.

North Side residents have long expressed an interest in more parks and trails, not to mention the need to take stock of air and water quality after a hundred years of heavy industry left their mark on the riverfront, but certain aspects of the plan in its original incarnation gave people pause. They were concerned about a loss of high-paying factory jobs in favor of low-paying service jobs-not to mention what a deliberate move to raise property values would do in a market where housing prices were already out of control.

Back in the early 2000s, the housing bubble meant ample investor money for residential development, and the prices of everything just kept going up. Jeff Skrenes, Housing Director at the Hawthorne Neighborhood Council, says that at that time people would probably have objected to the idea of doing something that would have further raised property values. Back then, says Skrenes, people worried about being able to afford a home at all.

Nowadays, of course, the picture is very different-the bubble has burst, home prices have dropped, and foreclosure has left whole city blocks virtually empty. According to Skrenes, investors are buying up the more “distressed” homes (fire-damaged or severely neglected), fixing them up, and renting them out. This leads to urban blight, he says, because renters typically don’t take an interest in the community and advocate on its behalf, and because landlords frequently allow the homes to fall into further disrepair.

Full disclosure: I worked as a part time environmental organizer for Hawthorne Community Council from 2000-2002 and wrote their first grant to the McKnight Foundation for the greenway project.

Skrenes said that the Above the Falls Plan isn’t well understood by community members, but there are elements of it that are very exciting to them—especially bike trails, help for a greenway along 26th Avenue North that’s been in the works for the past decade, and a “land bridge” linking Farview Park to the river. These amenities, he says, will attract real homeowners to the neighborhood—those who want to stay for the duration and work on improving the community.

In retrospect, the housing bubble may shed some light on why the city was so focused on new residential neighborhoods along the riverfront in the early 2000s. It may also be a reason, among several others, why the plan faded from the public spotlight for such a long time after the bubble burst.

What about the environment?

Several things happened between 2002 and 2006 that may have made the Above the Falls Plan a lower priority for city planning agencies. During that time, a lot of changes took place in city politics: a series of scandals involving city council members, including Councilmember Biernat, raised the ire of voters, the MCDA was reformulated into the CPED, the 2002 elections brought a massive changing of the guard to City Hall, and the era of inflated housing prices came to an end. The wind clearly left the sails of large-scale, publicly-funded development slated for the riverfront, poised to capture the “true value” of waterfront real estate. Regardless of what happened at city hall, however, the neighborhood activists I talked to were clear on one issue: they wanted an improved river environment and were anxious for cleanup plans to move forward, whether or not accompanied by new housing.

In the late 90s, the Mississippi Corridor Neighborhood Coalition (MCNC) conducted an inventory of the heavy industries located along the river, noting the primary toxins emitted from the smokestacks and drainage pipes. They collected river water samples and sent them to two places—to the University of Minnesota water testing lab and to the city. The results they got back were quite different.

Randy Kouri, a long-time member of MCNC and resident of Northeast, says that the report from the city listed far lower levels of criteria pollutants than the one they got from the University. “It’s a much rosier picture,” he said of the city’s report—and it worried MCNC members. They had also asked the city to conduct bottom sediment samples, and according to Kouri, they never did.

“The health of the river is in danger, and has been for many years,” says Kouri. “It seemed like they were going to do something, that this would be different from every other piece of the river. And it’s not. And that’s really sad.”

“Everyone is just trying to get a piece of the river.”

Louise Olson, another MCNC member, says that their coalition sent the water quality test results to the Mississippi Watershed Management Organization in 2004 and never heard back from them. And they haven’t heard from anyone about water quality in years.

“We were hoping for a cleanup,” says Olson.

A vision for the future

The Park Board is the city agency currently in charge of the Above the Falls Plan, and environmental preservation has been a clear mandate of theirs for many years. But there is also a Riverfront Corporation, a nonprofit corporation whose sole mission is to implement the plan. The winning concept by Tom Leader Studio contains most of the elements community members have been asking for-especially a focus on watershed management and improved access to the park. But it contains a lot of economic development initiatives as well, albeit under the banner of the “green economy” people have been talking about for the past several years.

Meg Forney, who worked on Above the Falls in the early 2000s and ran for the Park Board in 2006, sees a lot of good in the plan. She says that carefully balanced involvement from industry, community, and environmental organizations helped move the plan forward over the past decade. At heart was the belief that a natural amenity drives a strong, healthy economy by creating livability in the city—and that this is a long-term plan that could take more than fifty years to implement. There are some near term goals, including acquiring under-utilized land like the Army Corps of Engineers’ site, which is currently being used as a dumping ground, and turning it into a park—but she was careful to stress that land would be acquired only as it became available, and that expensive condos aren’t the ultimate goal.

“This is a vision for the future,” says Forney—one of a healthier, more livable city.

Jeff Skrenes and his Jordan neighborhood counterpart, Housing Committee Co-chair Daniel Rother, are among the believers.

“Minneapolis has some of the best parks in the world, but Jordan has no easy way to get to them,” says Rother. He’s optimistic that the new riverfront plans will change that—taking the North Side out of isolation and allowing residents, for the first time, easy access to the kinds of free amenities that are available to everyone else in the city.

“A kid has to be able to bike from the Jordan neighborhood to the river and Theodore Wirth,” says Rother, paraphrasing Mayor Rybak’s speech at the awards ceremony. With any luck, it won’t be long until that dream becomes a reality.

But it won’t be an easy road, paved with good intentions or not. Economic development, says Forney, will be the major focus going forward, and anything that gets green-lighted in the near future, given our state’s current sociopolitical climate, will have to demonstrate an ability to stimulate the economy. Parks and bike paths might do a lot for the health and well-being of North Side neighbors, but it will be difficult to demonstrate that they increase jobs and productivity. And that might make them a hard sell.

So whether or not kids on bikes can ever reach the park—let alone whether or not the latest vision of a healthy, prosperous North Side becomes a reality—remains to be seen.