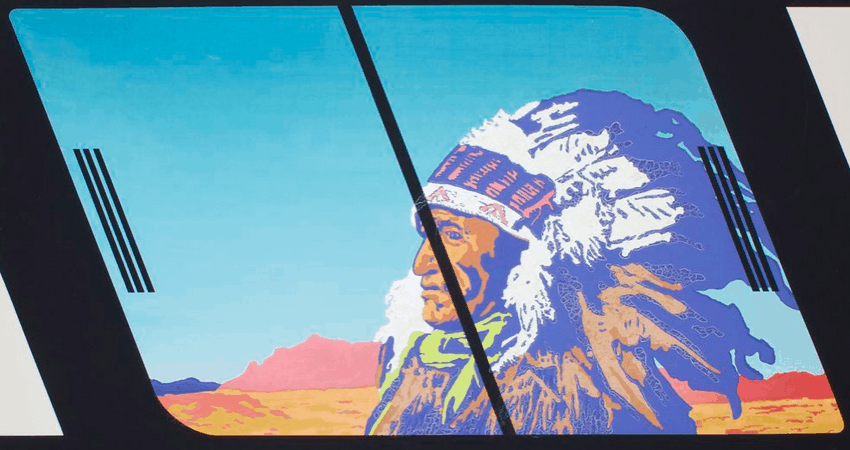 From Untitled, Ritter, The Warrior Collection

After about a 10-year hiatus, Two Rivers Gallery, located in the American Indian Center in South Minneapolis, celebrated its grand opening last weekend with a new exhibition showcasing Native artists. The gallery aims to support emerging Native American artists of all ages.

“Our focus is really on local artists who are just starting out and kind of providing them with exhibition opportunities and space to do collaborations,” says Maggie Thompson, the gallery curator.

Thompson grew up in Northeast Minneapolis and studied at the Rhode Island School of Design, where she received her Bachelor’s in textile design. After graduating, she moved back to Minneapolis, where she soon had a solo exhibit at All My Relations gallery.

It was through her connection to the Native American Community Development Institute, which operates the nearby All My Relations Gallery that Thompson learned of an opening for a curator at Two Rivers Gallery. After interviewing with Mary LaGarde, Executive Director of the American Indian Center, she got the job.

Thompson says her art education “was very European-centered,” so her position with Two Rivers has involved a lot of research. “I’ve been learning a lot about Native art and Native stories,” she says, “and kind of about their relationships with specific community members.”

The strong Native Arts community has been there as a resource, where she’s learned from people at NACDI, the Bockley Gallery, which often exhibits Native artists, and the Minneapolis Institute of Arts.

The first show, on view through June 5th, was culled from donations by local artists that the American Indian Center already had in storage. “I sat with the pieces and picked the strongest ones,” Thompson says. She also spent a lot of team cleaning and organizing, as well as researching the art and artists from the community.

For the next show, which will happen some time this summer, Two Rivers will have an open call for art, “to learn who is out there,” Thompson says.

In addition to visual arts, Thompson foresees the space being used for dance as well. In the basement of the American Indian Center, they have another space that Thompson can be used for implementing workshops “and help building resumes and portfolios,” Thompson says.

Mary LaGarde, the Executive Director of the American Indian Center, says that since the center opened in 1974, arts have been a huge part of it. However, when she took over as Executive Director two years ago, there hadn’t been a show in Two Rivers Gallery in eight years. “For me it’s something that’s very important to making sure the Indian Center’s doors are open and providing the community with that cultural and artistic experience.”

She was able to find funding to reopen Two Rivers Gallery from a grant the Center received from the First Nations Development Institute in Colorado. “That jump-started the re-opening of the Two Rivers Gallery,” she says.

LaGarde says she doesn’t see Two Rivers Gallery being in competition with All My Relations Gallery,  located nearby on Franklin Avenue, and spoke with Executive Director Jay Bad Heart Bull as she was writing the grant. “I really see this not as a competition but as a partnership,” she says. While All My Relations does show emerging artists, they often bring in national artists and local artists who have made a name for themselves. With Two Rivers, LaGarde is hoping to provide an outlet for artists who may never have been in a show before, or don’t have enough of their own pieces for a solo show.

Hopefully in the future, the two galleries will have openings on the same night, LaGarde says, enlivening the American Indian Cultural Corridor along Franklin Avenue. “It will be a flow of opportunities for people to see and experience different art exhibits.”

LaGarde foresees having openings about four times a year. At last Friday’s opening, they were able to raise funds through a silent auction that went toward supporting the gallery. Also at the opening, visitors were encouraged to indicate their interest in participating in future exhibitions. “Maggie will work with artists that have expressed interest and help them having a show,” LaGarde says.