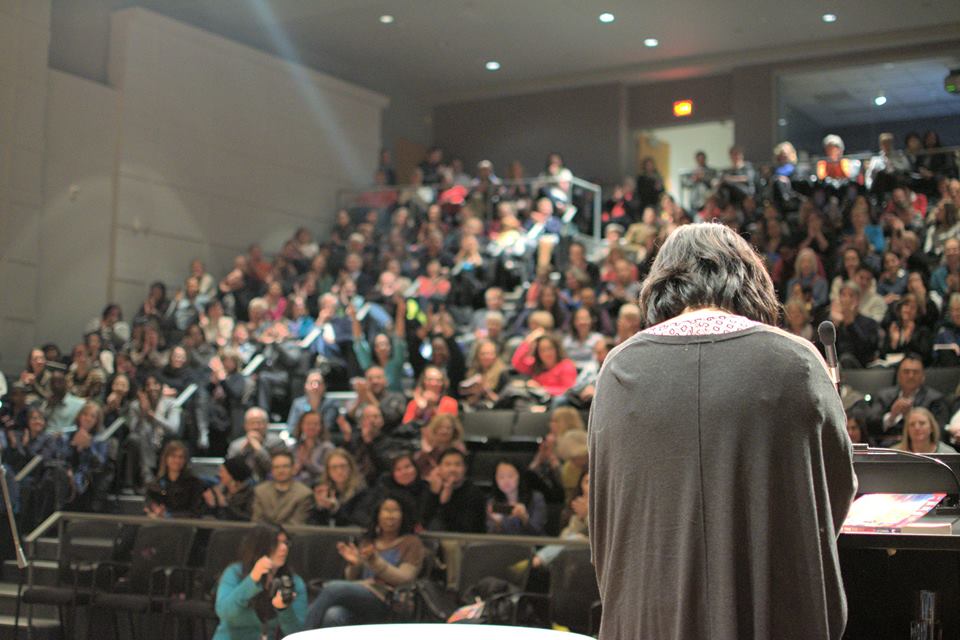 Sun Yung Shin, editor for "A Good Time For The Truth," speaks at the book launch in April. Photo by Bao Phi.

On March 30, seven days before the Minnesota Historical Society’s official book launch for “A Good Time For The Truth,” demonstrations began in downtown Minneapolis following Hennepin County Attorney Mike Freeman’s decision not to indict Minneapolis Police Officers Mark Ringgenberg and Dustin Schwarze for killing 24-year-old Jamar Clark. Less than four months later, St. Anthony Police Officer Jeronimo Yanez would kill 32-year-old Philando Castile during a traffic stop, while his girlfriend and her child were present, disputing the putative image of this being a family-friendly town. Acts of racially aggravated violence in Minnesota are as old as “A Tale of Two Cities” – some people insist everything is fine while others know a precarious truth.

At the book launch, there was a catered reception for audience members (mostly white) to converge while the auditorium was being prepped for the writers (all of color and Native). Only a handful of faces from the #Justice4Jamar 4th precinct occupation were in attendance, among them Minneapolis NAACP president, Nekima Levy-Pounds, who gave the inaugural address calling for an end to complacency and police brutality. Sun Yung Shin, poet and editor of “Good Time,” selected each of the 16 contributors based on their literary style, personal narratives and social justice lenses. Rodrigo Sanchez-Chavarria, Andrea Jenkins, Bao Phi, Heid E. Erdrich and Carolyn Holbrook were selected that night to read excerpts from their essays on how they had performed race. Most of the other 11 contributors were in the room, which remained quiet for two hours, except for a collective groan at Holbrook’s reenactment of a time she read Nikki Giovanni’s “Ego Tripping (there may be a reason why)” to a voice coach and he instructed her to “take the black out of it.”

“Good Time” is an anthology primarily for well-intentioned white Minnesotans to see how they injure people of color and Native people while still profiting off of their bodies.

“Every event I do in the Twin Cities is a predominantly white audience, which is in some ways sad because our community isn’t able to attend or doesn’t feel comfortable in those spaces,” Jenkins says, ”it feels a bit like pathologizing our truths and our stories but we gotta put it out there, we’re always doing that.” The deception of whiteness is to project blamelessness for its harm without foregoing any of its power or privilege, meanwhile people of color and Native people render their trauma and truths to no end. In a capitalist white supremacist society, the value of these stories isn’t equity or enlightenment but entertainment and profit steeped in voyeurism, and voyeurism that dips deeper into appropriation. In 2012, Saturday Night Live performed a skit caricaturing the culture of white hip hop in Shakopee, Minnesota unforeseeably predicting the emergence of local FM radio hip-hop stations with predominantly white producers, hosts and gatekeepers. 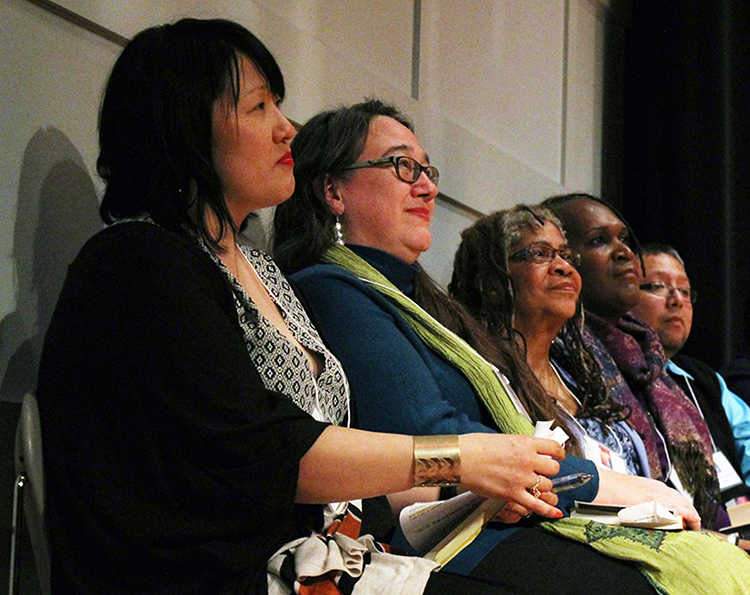 In fact, “A Good Time For The Truth” was not the original title for this book, contributor Shannon Gibney notes, it was “A Peculiar Price,” a line from, “Stranger in the Village,” by James Baldwin. “Publishers expressed concern around the wording and book sales. It’s a reflection of who they think their audience is which is not necessarily true.”

Cultural products, byproducts and artifacts are scooped up by white Minnesotans with a dissociation of how whiteness itself creates the disparate conditions for the art, this can be observed in the art world, ad nauseum: the opening for Revival, a white-owned and patronized Southern-style fried chicken restaurant; Doug Flanders & Associates exhibit of appropriated Dakota ledger art by Scott Seekins; Rhymesayers Entertainment’s 20th Anniversary concert at the Target Center (also see: Soundset Festival and Minnesota’s white hip hop scene); the film screening of Steve McQueen’s 12 Years A Slave at the Walker Art Museum. When artists of color attempt to defend themselves against this pathology they receive a blowback that is anything but decent and well-meaning.

David Mura writes in his piece, Surrealist History, about what happened when he protested against the Ordway Center for Performing Arts’ original showing of the musical, Miss Saigon:

I, and other local Asian Americans, protested the musical as well as the Broadway casting of a white actor in yellowface. I argued with white writer friends here about this yellowface casting and the Orientalist stereotypes in the musical, and I then wrote an article about these arguments and my experience raising a hapa daughter here for the national magazine Mother Jones. After that article was published, the community of white writers here reacted as if the Yellow Peril had risen up again. I got notes and letters saying things like, “Have you become a racial separatist?” Later, when someone brought up my name at a local university, my having written this article was cited as a reason for not hiring me. A local white novelist and essayist ran into into my friend, the Japanese American poet Garrett Hongo, and told him what a horrible person I was for writing such an article. Garrett called me and told me I should be aware I was being attacked, not just locally but also at national writer gatherings… Orientalist fantasy, which it seems that so many white Minnesotans would rather encounter than real actual Asian Americans.

In one sense, “Good Time” solves its own conundrum about how to combat the pathology of whiteness foremost by deviating away from a single story narrative and using writing to build bridges across marginalized demographics.

“There is a community being built around writers of color, it’s because of projects like this one and it’s also intentional,” Jenkins says, “Sun Yung and I were in a Loft writing program together, Shannon [Gibney] and I were in the Givens [Emerging Writers Mentor Program]. We are asking each other what are the ways we are not just creating work but how are we building community around that work, how are we supporting each other?”

This sentiment resonates with Mura who hosted a forum on Miss Saigon in which Sarah Bellamy, co-artistic director of the Penumbra Theater, shared the importance of storytelling centered around communities of color. “There’s a tradition of course of solidarity and activism,” Shin says, and that matters most in Minnesota. “Bao [Phi] and I have talked about this, and a lot of us in the collection have talked about this,” Gibney says, “this sense that when you go to cities like New York, Chicago or L.A. you have huge populations of black folks and Dominicans, so it’s not a monolith. Here we have been so historically whited out that people of color and indigenous community have to build links with each other to survive.”

“Last year everyone was all abuzz about the book ‘Citizen’ by Claudia Rankine but she is in New York and that’s what is happening out there. We don’t really know these people,” Jenkins says, “the power of this book is somebody knows Shannon Gibney, they interact with us on a daily basis and don’t know these underpinning things that are happening in our community.” Which is what drew the contributors into this project, a desire to speak their truths, and hope it pays off. “In some ways it felt like yes this is the audience that needs to hear these books and read these books,” Jenkins says, “but people congratulate themselves for just showing up. It’s not enough to only be aware and see and recognize, we need to act and change.”

So far, the feedback to Shin is that the book is getting into the right hands, “I think it is reaching the right people because I’m having lots of different kinds of white people say that it really changed their minds.” An online search of the title shows an outpouring of praise on book club forums, aggregate sites where the book is sold and from universities and organizations adding this to their reading/training list, to which Shin is satisfied.

Minneapolis Central Library will host the next reading for “A Good Time For The Truth” on Sept. 21 at 7 p.m. with Taiyon Coleman, Shannon Gibney, and Carolyn Holbrook. See additional upcoming dates on the book’s website.

Correction Sep. 9, 2016: An earlier version of this story incorrectly quoted Shannon Gibney as saying the original title of “A Good Time For The Truth” was “Precarious Condition.” The quote should have said “A Peculiar Price.” This version has been corrected.

Correction Sep. 20, 2016: An earlier version of this story incorrectly stated Officer Jeronimo Yanez was of the St. Paul Police Department. He is a St. Anthony Police Officer.