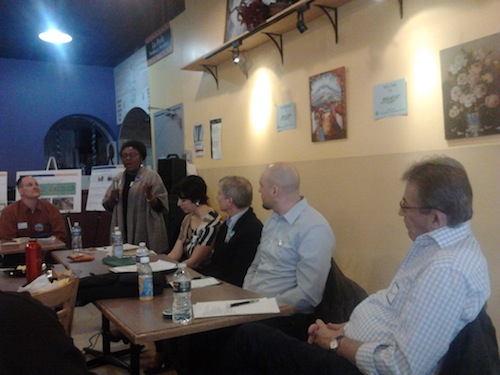 Candidates vying or the Ninth Ward City Council seat met at Mercado Central on April 26 for Breakfast with Gary, a monthly meeting hosted by City Council member Gary Schiff, held from 7:30 to 9:00 a.m. at Mercado Central. Candidates included Patrick Fleetham (no website found), Alondra Cano, Jettie Ann Hill, Ty Moore, and Tim Springer. Charles Curtis, another 9th Ward candidate, was not in attendance. DFL delegates for the Ninth Ward will vote in convention on May 11.

The Ninth Ward seat is being vacated by Schiff, who is running for mayor. Here’s a look at the different candidates and what they had to say.

Safety is a big concern for Fleetham, owner of Fleetham Furniture, as well as protecting the environment. He hopes to push for regulations that would reduce the amount of asthma residents suffer, and hopes to impose traffic calming measure to prevent heavy trucks on Hiawatha Avenue. He’s for raising the minimum wage and term limits for city council members.

Ty Moore is the only socialist candidate, has already won Green Party endorsement. He wants to fight against what he calls the current trend of the city running in the interest of developers, with the stadium being a prime example of “corporate welfare handouts,” he said. An activist with Occupy Homes, he wants to see an end to using law enforcement resources to evict families.

Tim Springer, the former executive director of the Midtown Greenway Coalition, wants the city to focus on sustainability, and becoming a more equitable place. That said, he’s also concerned about safety.

Alondra Cano, a former aide to current city council member Robert Lilligren (who lost the DFL endorsement this past weekend), wants to focus on restorative justice and community building. She currently works as a Senior Communications and Public Affairs Specialist for Minneapolis Public Schools.

A Corcoran resident, Hill has been a social justice advocate, and worked on campaigns for State Senator Patricia Torres Ray and U.S. Representative Keith Ellison. She says that when she first moved into the neighborhood, Mercado Central didn’t exist yet, and instead there were a string of massage parlors. “I want to focus energy on neighborhoods, families and children, and small business, she said. An avid biker, Hill believes that Minneapolis can no longer work in a silo, and has to work together with the school board, library board, and park board to bring about change.

The candidates all agreed that the city needs to focus efforts on making sure landlords follow regulations and prevent over-occupancies. Hill and Fleetham say that the city needs to beef up inspections, which Moore agreed with and said more funding is needed in that area. He also feels we need strong tenant organizations and rent control, but also said we need to look at focusing on eliminating poverty and unemployment. Cano wants to continue Schiff’s work in building coalitions with businesses, police, regulatory services and communities. Springer also would focus on partnerships with landlords.

Candidates had differing opinions about vacant storefronts in the Ninth Ward. Fleetham said they weren’t inherently bad, as sometimes it just means the landlords are looking for higher rent. Of course, if the rent gets too high, he worries that the Ninth Ward would start to look like Uptown, with its plethora of bars, which he doesn’t see as a good thing.

Moore sees vacant storefronts as resulting from a lack of spending power of ordinary people, so he’d like to see lower taxes for working people and various incentives and subsidies for small businesses looking to invest.

Springer thinks that working with landlords to help them bring their buildings into compliance with regulations will help foster more new businesses in addition to the strong contingent of immigrant owned business in the ward.

Cano said she wants to foster local commitment to buy local and work with the community to write a small area plan to ensure people have a say in the future of the ward.

Hill thinks that vacancies cause a feeling of being unsafe, especially along Lake Street, and she feels we need to “get creative” about opportunities, mentioning McKnight Foundation’s Community Land Trust as an example of thinking outside the box.

What would you do differently?

The candidates had plenty to say about what they would have done differently in the recent past. Cano, for instance, said she has been “baffled to learn,” that the firefighters’ budget has been cut. Springer said he doesn’t approve of getting rid of the CRA, and plans to work toward changing the current review panel of police, on which two civilians and two police vote, and the chief of police is the tie breaker.

Moore said he believes that bike lanes have been underfunded, and hopes to work for “systemic changes” to make our roadways safe.

Finally, Hill said she wishes the city would look toward its public works department, and the impact of aging infrastructure.