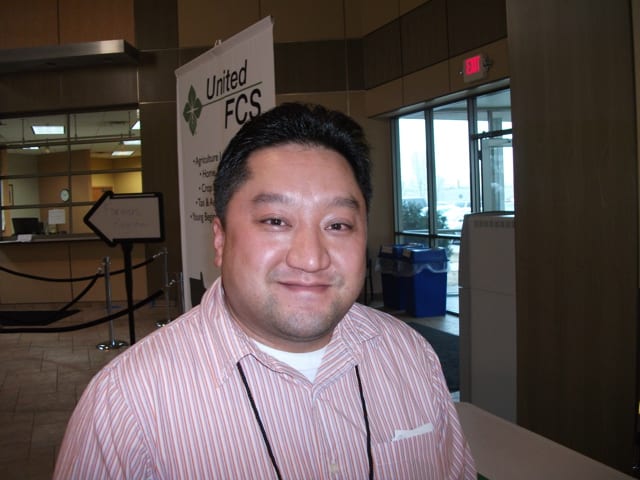 “The highlight clearly was that this is a immigrant farmers’ conference; its their conference,” said Glen Hill, the executive director for Minnesota Food Association.  “They are represented, feel comfortable, speak and share, and they feel empowered.”

Nearly 500 people came registered for the Seventh Annual Immigrant and Minority Farmers Conference. According to Joci Tilson, assistant director for MFA, 278 of the registrants were farmers. Eleven states were represented with the larger groups coming from Minnesota, Wisconsin, Kansas, and Kentucky.  Translation was provided for the following languages: Burmese, Karen, Somali, Swahili, Hmong, Spanish and Bhutanese…Hmong being the latest group of 163 people. The conference was hosted by Association for the Advancement of Hmong Women, Minnesota Food Association, USDA Farm Service Agency, and USDA Natural Resources Conservation Service and held on February 3 and 4 at North Central States Regional Council of Carpenters in St. Paul.

A few of the workshops were on basic/intermediate farming skills including business planning and financial management, long-term financing, markets and equipment, history of farming in Minnesota, promoting your farm, need for more land, and getting started with chickens.

“There is a concern for farmers’ rights.  We want equitable access to USDA programs,” said Hill.  “Farmers also have a huge interest in very specific technical production and marketing.”

Vince Xiong, a farmer-in-training at the Big River Farms program of the MFA at Marine on the St. Croix,  said, “I hated farming when I was young. The hoe was back breaking.  I remember how much my back ached weeding and how it ached even more tilling with an Asian hoe.”

Xiong hated farming when he was a boy helping his parents farm in Laos. Years later, his sister brought him to an MFA meeting in Minnesota, where he discovered he had a passion for farming.“It was only when I got older did I realize how important farming was to my Hmong people, family, and society,” said Xiong. “I saw how much sickness and disease there was around me. I realized how powerful vegetables can be and how much our health is tied to our food.”

As Xiong raises and sells organic vegetables, he plans to expand his farmer-in-training program to five years. The farming is a family operation. His mother has diabetes and Xiong wants to learn about a healthy vegan diet to help her and other Hmong people.  “With the Western diet, I am seeing more and more Hmong people dying of diabetes, high blood pressure and cancers,” said Xiong.

Amy and Proeun Doeun were also trained through MFA’s three-year program. Along with their four children, the Doeuns moved onto their own farm in Rush City, Minnesota on January 1.  They are the second family to use this land as a farm.

“Being raised in the cities, I was not interested in farming but my husband is from Cambodia and he likes farming,” said Amy Doeun.  But it wasn’t until their son showed signs of really liking farming that they decided to farm.

“It was laughable how little I knew. I could not tell the difference between carrots growing and weeds,” said Amy Doeun.  “Our money was tight, no extra money.  What made it possible to succeed was selling our vegetables that we grew from our ¼ acre of land at Big Rivers Program.”  They broke even the first year and the following two years got better.

“We could not have become farmers without the help of Minnesota Food Association,” said Doeun.  They have been running a certified CSA (community supported agriculture) farm since 2008.

Her husband is a driver for Metro Transit and Amy Doeun is a freelance writer and homeschools her four children. The Doeuns are building a meal farm with honey, chicken and vegetables.  People can get produce from their certified CSA. Customers can buy shares in their farm and produce and get organic food in return.