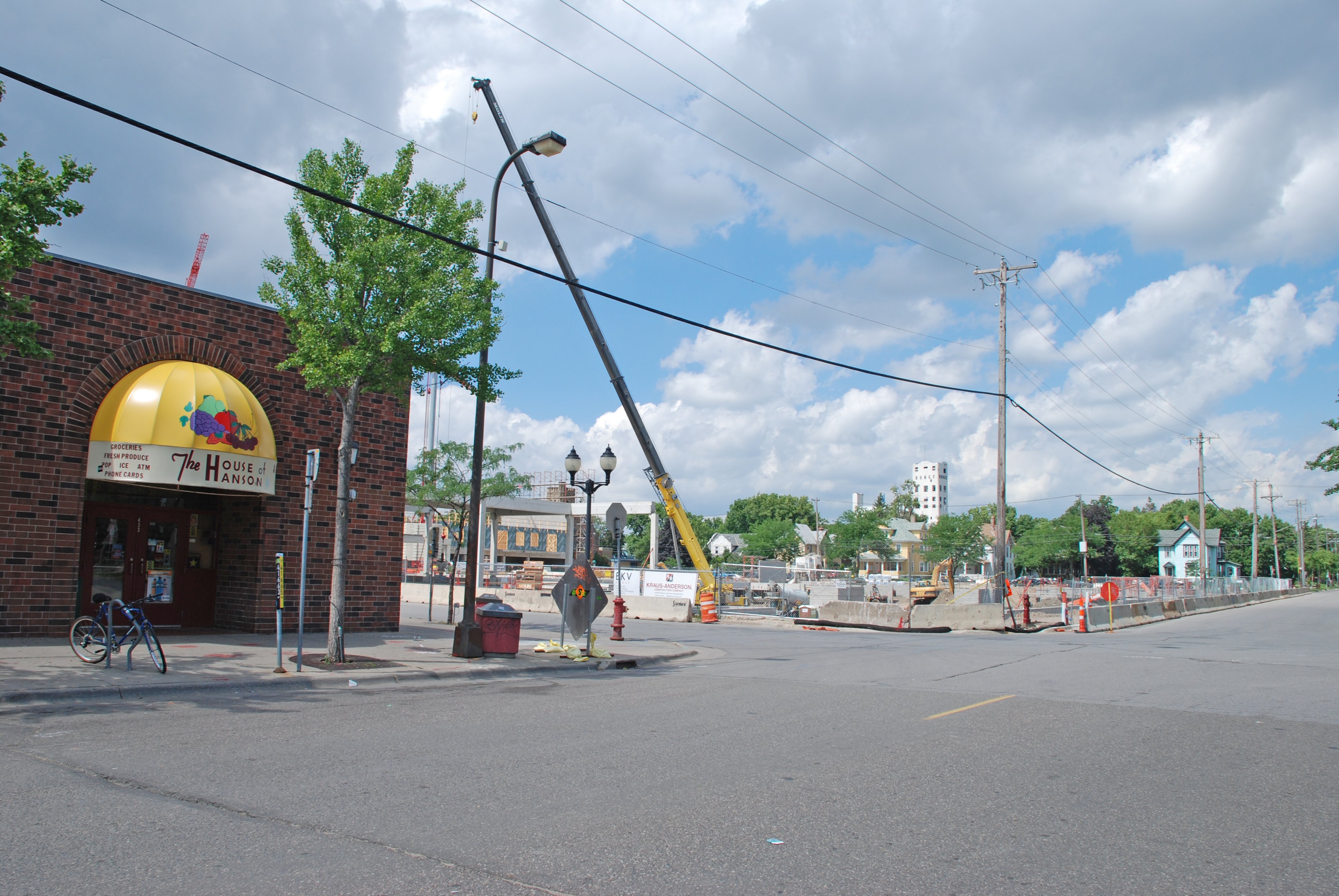 The House of Hanson, which has been a corner grocery store in Dinkytown for 80 years, will close on July 31, 2013, owner Laurel Hanson Bauer announced on July 22.

“I was not ready to reveal my end date, mostly for emotional reasons,” she said in an e-mail. “But I am ready to pull the plug and am closing the doors for grocery sales on July 31st—yep 9 days!!!!”

Earlier this year, Bauer signed a purchase agreement with Opus Development, which plans to build a six-story mixed-use business and apartment complex on the site.

Since then, residents and businesses have lined up to support or oppose the development—both sides claiming they will do the most to “save” Dinkytown.

The development requires approval of a number of variances and rezoning from commercial (C1) to mixed use (C3A) by the City Council, whose zoning and planning committee will hear the development proposal at 9:30 a.m. on Thursday, July 25, in City Hall. Committee actions could go the next full City Council meeting on Friday, August 2.

The proposal called “5th Street SE Mixed Use; 1300-1322 5th Street SE and 425 14th Avenue SE” is listed on the zoning and planning committee’s consent agenda and three staff reports have been posted. The city’s planning commission approved the development on June 24.

Kristen Eide-Tollefson, whose Book House store was evicted from Bauer’s building, helped create the Save Dinkytown organization to stop the Opus development.

“Save Dinkytown will present a 3,000-signature petition opposing rezoning—1,000 handwritten and 2,100 online signatures—with hundreds of comments to City Council Member Diane Hofstede on Tuesday, [July 23]” and to the zoning and planning committee, Eide-Tollefson said.

Eide-Tollefson said they will seek a public hearing at the zoning and planning committee. The city DFL convention this summer supported their position against the Opus project.

Eide-Tollefson said the council could vote for the rezoning without commenting on the Opus project. The council should put a moratorium on Dinkytown development until the area completes its small-area plan as an activity center, she said.

Pat Duffy, owner and manager of Duffy’s Pizza, at 1308 Fifth Street Southeast, will close his business at the end of this week (July 27) or when “the food runs out,” he said. Casablanca Hair Salon, which was in Duffy’s other building, has already closed.

“I’m not selling my equipment until the development is a done deal,” he said. “These houses are two duplexes with tenants.”

Duffy, who owns and manages the duplexes in old Victorian houses with commercial space, said he hopes to reopen his pizza business in one of the two new buildings on Fifth Street—either the Opus development or UTEC under construction across the street.

“We’ve been here for 10 years and I want to be here when Dinkytown is alive and kicking again,” said Duffy said, who added that his business peaked in his third year. “For the past five years, we’ve been struggling.”

At one time, he employed 15 students working part time in the pizza place, but he now employs two.

Fifth Street can become a busy street again, he said, with 1,500 residents in the new UTEC and Opus buildings—and they will walk through Dinkytown to get to campus, unlike the residents of the 1301 University Avenue building whose residents can merely cross the street to the campus.

He also blamed parking restrictions in the Marcy-Holmes Neighborhood for some of the business decline. Fewer people park there and walk through Dinkytown to the campus, he said.

“We’re taxed at the value of the most commercially successful use of the land. And that’s not surface parking,” he said.

“If they are not going through with it, we will do it another way. We can with C1 zoning build a box up to four stories and rent apartments. We can do that. We won’t have a choice,” he said.

Save Dinkytown advocates, however, say the rezoning will increase property values, creating an incentive for more intensive developments that will take out the small-scale buildings and businesses, paving the way for more chain stores.

“Save Dinkytown decided to focus on the rezoning as the primary issue, since this is what most threatens Dinkytown as a whole,” Eide-Tollefson said. “It gives a green light to developers to ‘redevelop’ Dinkytown, like they did Stadium Village. This is too much to lose. Dinkytown is still 69 percent small business, but this will change rapidly with ‘redevelopment,’” she said.

Bauer, on the other hand, is optimistic that Opus will acquire her land soon after council action.

“Wheels seem to be turning and we are on a tight schedule so I needed to pull the plug,” she said. “Gettin’ it done.”

Bauer said she will remain open longer for “a few days perhaps a week and a half to sell all shelving and equipment etc.”

The parking lot will remain open longer, she said. “We will keep it open until bulldozers arrive or Opus says, ‘you’re out.’”

The House of Hanson was founded by Bauer’s grandfather Henry Oscar Hanson on October 3, 1932. It was attached to the front of the family home and included an ice cream parlor and soda fountain until the 1960s.

Read more about development in Dinkytown.