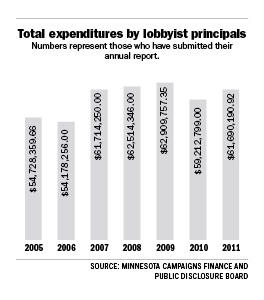 More than $61 million was spent on lobbying in Minnesota last year, according to the Minnesota Campaign Finance and Public Disclosure Board.

Sen. Linda Higgins, a member of the Senate Finance Committee, said most of the money spent isn’t given to legislators but rather to campaigns. She added that lobbyists provide information supporting or opposing an issue, rather than pay lawmakers money to influence a vote.

Higgins, DFL-Minneapolis, said she doesn’t meet with lobbyists as much at this point of the session.

“At the beginning of the session, we have more time, and I may meet with five or six lobbyists a day,” Higgins said. “When committees are wrapping up and we’re spending more time on the Senate floor, we don’t have as much time, and lobbyists often talk to us when we’re walking through the hallways.”

Lobbyists must register with the state and file periodic reports on spending, according to the Minnesota Campaign Finance and Public Disclosure Board.

Under state law, lobbyists can spend more on campaigns in election years than in non-election years and more on the governor’s race than in the House or Senate campaigns. They cannot make contributions during a legislative session.

Robin Phinney, a research associate in the political science department who studies interest groups, said contrary to popular belief, most money isn’t given to lawmakers.

“Not all of the money is automatically buying a vote,” Phinney said. “They are using the money to signal interest and research in the issue.”

Higgins said when she arrived in the Senate, the Legislature put such rules and standards on lobbying in place.

“Most money that is spent by lobbying groups, I assume, is employee salaries and contracts,” Higgins said. “Donations to campaigns are an extremely small fraction of what is spent.”

Higgins said when a bill or popular issue is being debated on or voted on in the Legislature, more lobbyists involved with that particular issue are hired.

Phinney said many topics garner more spending when brought up in the legislative session.

Lobbying expenditures are up $2 million from last year. “There are a variety of reasons why spending is up,” Phinney said. “It could be due to some of the different issues being debated in the Legislature and the interests in those issues.”

Phinney said there is often more money spent in election years because there are more candidates to influence.

The University of Minnesota Foundation, the only University entity listed on the six-year report, hasn’t spent any money on lobbying in the past six years. The University did not have a comment on the subject, however the Minnesota statute states a lobbyist can’t be an employee of the state, including an employee of any of the public higher education systems.

The University does have the Office of Government and Community Relations that works to advance the interests of all the University campuses at the state Capitol in St. Paul and in Washington, D.C.

The office attempts to “elevate the level of support the University receives from the public, alumni, faculty, staff and students by increasing their understanding of the University’s contributions to research, education and the economy,” according to its website.

The combined salaries of that department totaled more than $1 million in 2010.

Other large lobbying spenders include the Minneapolis Radiation Oncology Physicians with $900,000, the Minnesota Vikings with $840,000 and the Minnesota School Boards Association with $600,000.